Runners: To Get Faster You May Need to Slow Down

In the movies, coaches say things like “Clear eyes, full hearts, can’t lose!” or watch intently as their athlete sprints by on the track, and you know they’re silently willing them to go faster, faster!

In real life? If you’re an endurance runner working with a coach, chances are they regularly instruct you to do just the opposite: slow down.

In fact, slowing down might be the one thing standing between you and the stronger, faster runner you could be.

The problem is, if you push hard all the time, your body will, at some point, give in. The consequences are no fun, ranging from overuse injuries, getting sick too often (a compromised immune system), and inability to sleep well, to the worst of all: losing your running mojo and, eventually, giving up on running altogether.

All of the above are symptoms of overtraining and, more often than not, overtraining is a direct result of working too hard, too often.

How do you know if you’re running harder than you should? There are complex ways to determine this, using heart-rate data and software like Training Peaks, which has charts that look like this: 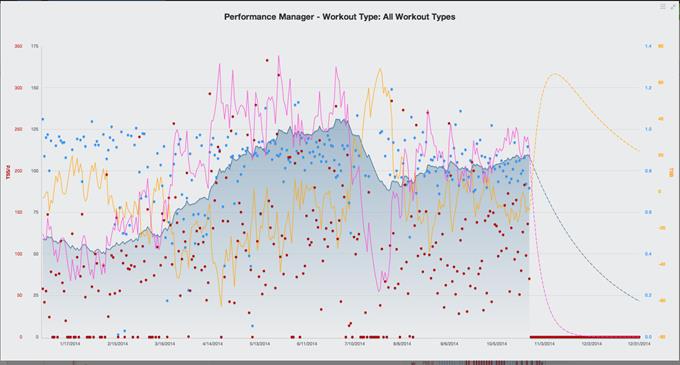 And there are simple ways, like asking yourself these questions:

1. Do I run all my runs at the same pace?
If you answer yes, you are either not running often enough to improve, or you are pushing harder than you should — or both. Don’t get me wrong, running two-to-three times a week is totally OK for the recreational runner who either doesn’t race, or does so with no time goals in mind. Chances are, this person has other, more enjoyable hobbies or fitness passions: weightlifting, CrossFit, Zumba, you name it. Nothing wrong with that! But, continually improving as a runner and knocking out those PRs requires more planning — and more running.

2. Do I need more than three rest days each week to recover from my runs?
If the answer is yes, then you are running too hard. Training for a long-distance event like a marathon, or even a half marathon, requires you to peak at anywhere between 35 to 60 miles a week (even more, for competitive runners). This is hardly achievable with three to four weekly runs. Not to mention, if you need a rest day after every single run, you are missing out on valuable adaptations your body would make if you went out and did a recovery run on tired legs. Again, in order to do this, you will have to introduce some easy-run days into your schedule.

3. Do I obsess over each run’s mile splits and feel unaccomplished if they are slower than usual?
If yes, you most surely are running each run too hard. And it’s hardly breaking news that, if you try to better your time or mile splits on each run… well, sooner or later you will fail. That sort of mindset is almost a guarantee for reaching a point where your relationship with running turns sour.

4. Do I usually feel tired, spent and unable to run another mile at the end of each run?
It’s OK to feel that way at the end of a hard run (a long run, a tempo run, speed work). But all runs? You are running them too hard.

So, what is an easy run and why do them?

Easy runs are typically scheduled on days immediately following hard workouts or long runs. An easy run done on the day after hard work will force you to run on tired legs – which will give you valuable coping skills for those final miles in a race. It will also help your muscles loosen up. (Seriously, try going on an easy run if your legs are sore — they will feel better after a few miles!) Not least, slow running trains your aerobic system, gradually making your body more efficient at burning fat for energy, rather than carbohydrates.

If you’re reading this and asking yourself, Why would I listen to some random crazy person with a blog?— well, I don’t blame you. I never take advice from strangers with unknown to me background and credentials — why should you?

So here are a couple of books I hope will give you all the information you need to make your own decisions:

Make slow runs a part of your training schedule and enjoy them! You are doing work that is benefitting your running — even if the mile splits are nothing to brag about.

Meet soccer coach Nicholas P! Nicholas is a former college soccer player who stays connected to the sport he loves by helping bring the best

Meet Coach Matt S! Coach Matt coaches soccer with CoachUp. He specializes in offensive soccer skills, footwork, and shooting and passing techniques, and he has

One Day You Will Miss Practice, I Promise

One Day You Will Miss Practice, I Promise Those two-a-day practices in the heat; those after-school battles each and every day with your teammates — I