Heading into the frenzy that is Super Bowl week, Richard Sherman’s post-game antics may still be at the forefront of everyone’s news feeds, but let’s take a minute to focus on the single most influential factor that has brought the Seahawks to the big game this Sunday. He can’t pass like Peyton, break tackles like Newton, or gallop out of the pocket like Kaepernick, (heck, he isn’t even as tall as Brees), but he’s responsible for bringing Pete Carroll’s band of under-drafted misfits to the Meadowlands.

Russell Wilson, drafted 75th overall in the 2012 NFL Draft by the Seattle Seahawks, was not expected to achieve greatness. In fact, he wasn’t even expected to start. Experts wrote him off as a 3rd string backup for Seattle, destined for a career of riding the bench and supporting superstar QBs that were bigger, faster, and taller.

But now, less than a week away from the Superbowl, Russell Wilson, in his 2nd year in the NFL, has led his team to the biggest stage. After winning the starting job in Seattle as a rookie, Wilson has accomplished more than many players can in their entire career.

On the short list (pun intended): Wilson has the most wins by a quarterback in his first two NFL seasons, been elected to two Pro Bowls, tied Peyton Manning for the most passing touchdowns as a rookie, and has the 2nd highest passer rating ever for a rookie quarterback. He has the best touchdown-pass-to-interception differential for a rookie in NFL history, is the 3rd quarterback in history to throw 50 touchdown passes in his first two years, and set the record for most passing yards in a playoff game by a rookie. Oh and did we mention he’s only lost at home once (all while being the last quarterback drafted in the 2012 draft)?

So what makes Russell Wilson so special? On paper, he wasn’t supposed to succeed. But he has arguably become the most successful 2nd year quarterback in NFL history.

In the Levi’s 2012 #GoForth commercial, Wilson talks about the three Ps of advice his father used to give him.

Always have a great Perspective.

Always have great Purpose in your life.

This is great advice to live and compete by, but Russell Wilson may actually be more well known for an additional P.

“The separation is in the preparation.”

Wilson’s work ethic has become legendary among the Seahawks camp. Renowned former NFL Coach Jon Gruden has praised Wilson’s study of the game and called him “exactly the kind of quarterback I would want to coach.”

As aspiring athletes wanting to reach another level, we can learn a lot from Russell’s preparation and applying that to our own training.

Wilson is notorious for being the first player in the Seahawks office, sometimes even beating out his early-rising head coach, Pete Carroll. After Wilson’s first home loss (he’s 17-1 at home) against Arizona in December, he was back at the Seahawks practice facility at 4:30AM reviewing game tape from the night before. A quick look at Wilson’s Twitter will reveal one of his favorite hashtags “#NoTime2Sleep.” It’s clear that Wilson doesn’t waste the day while trying to become the greatest.

We can take ownership of our fitness through our schedule. Wilson shows consistency in his preparation by waking up early to start the day. Instead of struggling with the decision to run after work or school, try waking up early and going on a run or heading to the gym. You’ll feel great the rest of the day and won’t feel conflicted with whether you feel up to exercising in the evening.

2. Know Every Detail of the Game

Wilson’s preparation is manifest most in his study of the game. Wilson’s obsession with detail is truly next level. Get this: John Clayton of ESPN reported “Wilson knew there will be 56 footballs used, and they likely will be rotated every three plays. The balls have a Super Bowl emblem, which tends to make them slicker than the usual NFL footballs, so Wilson plans to make sure each ball is rubbed down to help cut down on the slickness.” Whoa. If that’s not detail, I don’t know what is.

You don’t have to know the amount of stitches that are in your soccer ball, but being fully versed in the formations your coach wants to run is going to make you that much better (because you’ll have a greater understanding of your roll on the team). If you’re passionate about your sport, treat it like your job or schoolwork. Study hard, work hard, and results will show. Wilson’s not tall, but his football I.Q. is off the charts.

When you ask Wilson who he looks up to, he’ll tell you his dad, Harrison Wilson III. Although Wilson’s father passed away from diabetic complications when he was in college, Wilson still relies upon the lessons his father taught him. In fact, Wilson’s “the separation is in the preparation” came from his dad. Another hero of Wilson’s is Drew Brees, quarterback of the New Orleans Saints, arguably one of the most successful (and shortest) of the current era of quarterbacks. Wilson has studied everything about Bree’s game, from his throwing motion to his footwork and has worked to adapt Bree’s style to his game. Wilson still holds Brees in high regard, occasionally asking him for preparation advice, most notably in regards to the Super Bowl this weekend.

Who are you inspired by? Whose game do you want emulate? Study how they play, how they compose themselves on and off the field, and be like them. ‘Lil Bow Wow needed some magic sneaks to be like Mike, but Wilson wanted to be like Brees and he’s lived up to that, besting his hero twice this season.

4. Be Determined to be Successful

If you didn’t know Russell Wilson, you may think the guy is a little cocky. But he really believes that he can do anything. So does his coach. Carroll says “he’s got great self-confidence, and believes in what he is capable of doing, in that there’s nothing that he doesn’t think he can’t do. He’s a fantastic athlete to go along with all of that, so whatever he can think of doing he can basically do.”

You can decide in your mind that you are going to win. It’s not overconfidence, it’s confidence in yourself, your abilities, and your preparation. If you know you’ve done everything you possibly can to succeed, tell yourself you will. And you will. Wilson told himself that, and his team is in the Superbowl.

5. Find a Coach You Can Trust

Wilson wouldn’t be nearly as close to where he is now without the special attention of the Seahawks coaching staff. He has an extremely close relationship with Carroll in which Carroll trusts Wilson to make the right on-field decisions and lead the offense. In return, Wilson trusts Carroll and offensive coordinator Darrell Bevell to call the right plays and provide the best training and practice regimens tailored to his game and the Seahawks offense.

Find a coach! Pursue private coaching from someone more knowledgeable and experienced than yourself. Wilson has taken the advice from his father to heart, learned from great quarterbacks like Drew Brees, and sought out the instruction and guidance of the Seahawks coaching staff. Take your game to another level with a CoachUp coach, and prepare to be great just like Wilson. 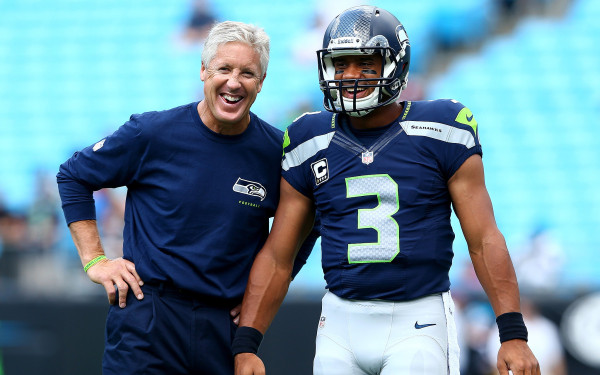 When searching for the perfect workout, many people try to find one that not only improves their fitness but also gives them a skill they

How useful was this post? Click on a star to rate it! Submit Rating Average rating 0 / 5. Vote count: 0 No votes so

Julian Edelman’s touchdown pass brings his passer rating to a perfect 158.3 in the NFL. When the New England Patriots coaches called the trick play