Some of the greatest coaches to grace the gridiron or pace the hardwood have been fictional. They hold a special place in pop culture history, and sometimes we wish they could hop out of the TV and give us a pep talk. Unfortunately the closest we can get is flipping on the TV or digging into our Netflix queue. Many Friday nights have been lost listening to the wise words of “Wax on, wax off,” “Ducks fly together!” and “Clear Eyes. Full hearts. Can’t Lose!” Each fictional coach has his own style, but we want to know who has the best style. Who has the best motivational speeches? Who has the best win-loss record? Who’s coaching wisdom most affects his players’ ability? We’re asking you: Who is the greatest fictional coach?

The voting period for Round 1 is closed. 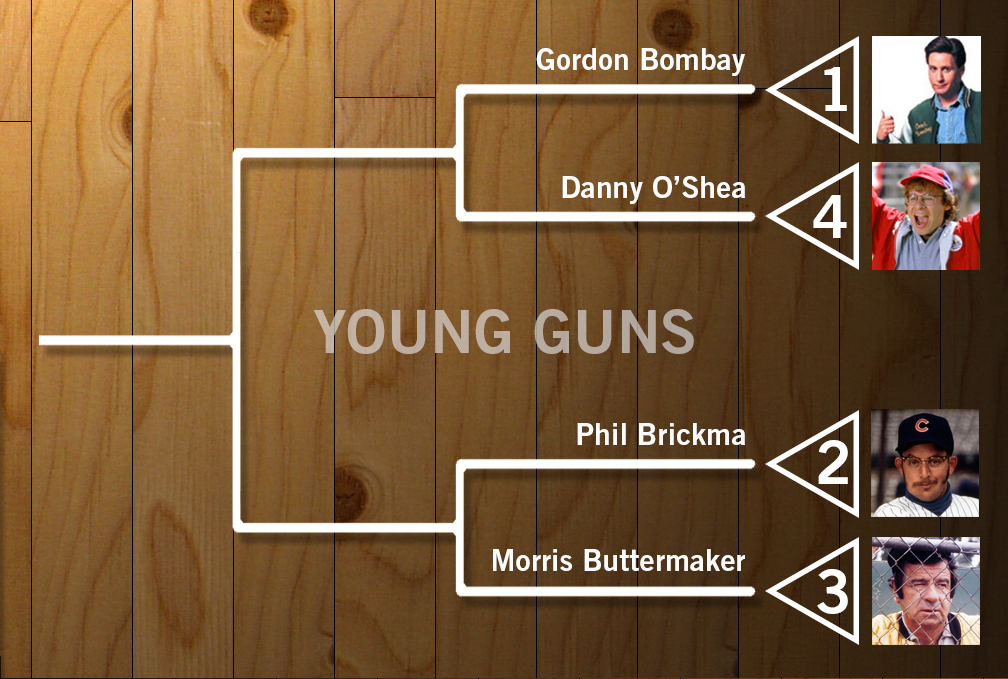 These are the coaches who took young athletes who didn’t always believe in themselves to Another LevelTM. The head coach of the Ducks is the favorite to come out of the Young Guns, but let’s see if there’s Bad News in store for him. Danny O’Shea coached up a little team to victory and Phil Brickma mentored a young Henry Rowengartner to pitching success despite his age and size. Who’s coming out of this division?

https://www.youtube.com/watch?v=ZyVF1glhAfk “Have you guys ever seen a flock of ducks flying in perfect formation? It’s beautiful. Pretty awesome the way they all stick together. Ducks never say die. Ever seen a duck fight? No way. Why? Because the other animals are afraid. They know that if they mess with one duck, they gotta deal with the whole flock. I’m proud to be a Duck, and I’d be proud to fly with any one of you. So how about it? Who’s a Duck?” -Gordon Bombay http://youtu.be/khauvdb_f8A “Who said you had to be good to play football? You play football because you want to. You play football because it’s fun. You play football so you could pretend you’re Joe Montana throwing a touchdown pass, or Emmitt Smith going for a long run. And even if those Cowboys are better than you guys, even if they beat you 99 times out of 100, that still leaves…one time.”  -Danny O’Shea [socialpoll id=”2230178″]

https://www.youtube.com/watch?v=GoKkSYgWVHQ “Sometimes you just gotta put the pedal to the metal and live the fantasy! Rock and roll!” -Phil Brickma http://youtu.be/K2qNJ7IzzqE All I know is when we win a game, it’s a team win. When we lose a game, it’s a team loss. -Morris Buttermaker 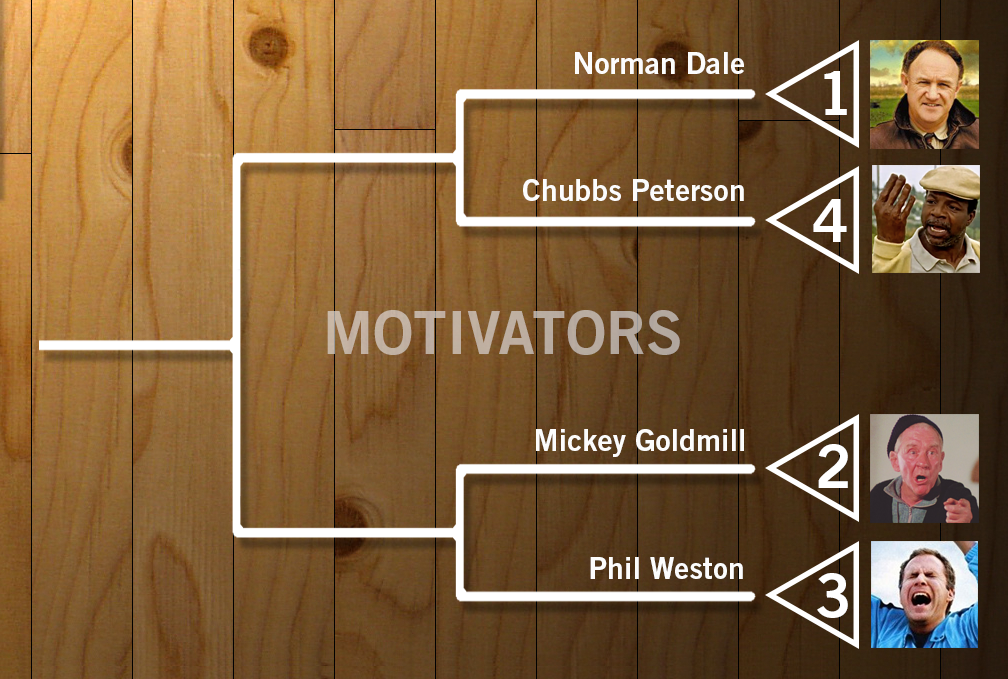 These motivational coaches were able to inspire their athletes to championship titles. Norman Dale led the Hickory Hoosiers to a championship. Mickey Goldmill took Rocky from a nobody to  Heavyweight Champion of the World. Phil Weston, though through unconventional methods, led the Tigers to a championship with a team lacking for talent. Chubbs Peterson gave Happy the base he needed to become a golfer and served as Happy’s motivation upon his death. If you want to get you butt in gear, you need a speech from one of these coaches.

https://www.youtube.com/watch?v=H5ZBOL3M6B0 If you put your effort and concentration into playing to your potential, to be the best that you can be, I don’t care what the scoreboard says at the end of the game, in my book we’re gonna be winners. -Norman Dale https://www.youtube.com/watch?v=qDR_yTik_xo Yeah. tournament down in Florida. I hooked my ball in the rough down by the lake. Damned alligator just POPPED up, cut me down on my prime.  -Chubbs Peterson [socialpoll id=”2230219″]

https://www.youtube.com/watch?v=CObJZf2YzDw You’re gonna eat lightnin’; you’re gonna crap thunder. -Mickey Goldmill https://www.youtube.com/watch?v=wDJ7L1mP3CA All right, Tigers. Lets get ready to play, huh? I don’t want to see any laziness here. If we win this we’re in the finals. If we get a big lead, we gotta pummel these guys, pummel them at all costs. Dominate, and hammer them. I want you to play dirty, if you have to, but don’t get caught. Byong Sun, stay low. Ok. That’s easy for you. Just chop-block ’em in the back of the knee. That will work well. Ambrose, you’re big. Don’t be afraid to throw the elbow. If you break someone’s collar bone, that’s a good thing, that’s what the medic’s for. Otherwise he’s just sittin’ around. All right! You hear me! -Phil Weston [socialpoll id=”2230222″] 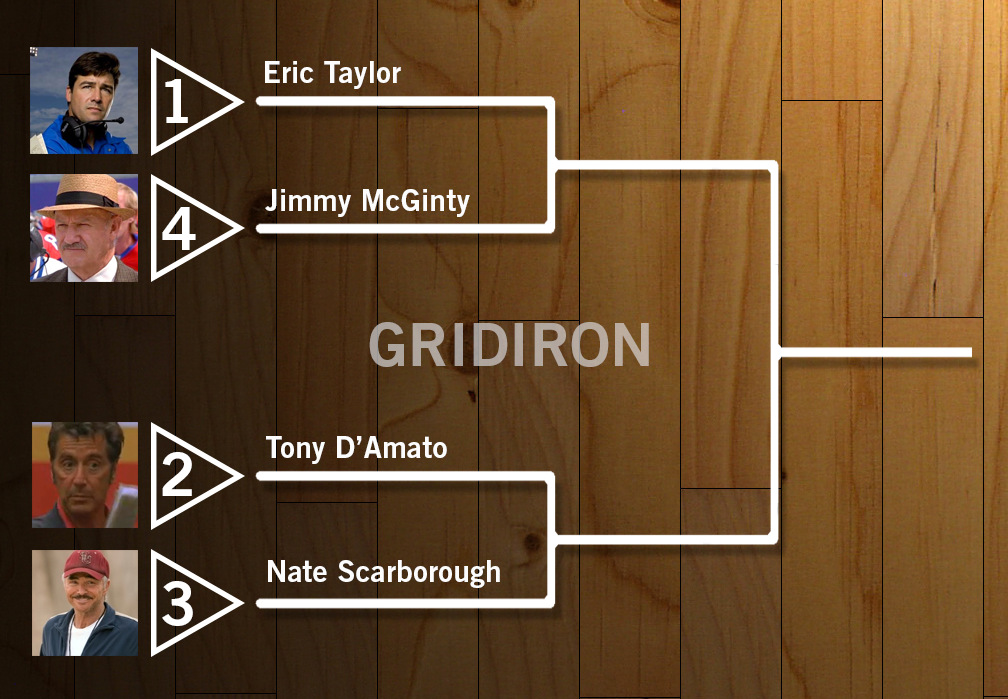 These coaches gave their all on the football field at the high school and professional levels. Possibly the greatest high school football coach of all time is the one-seed in this division. Among his competitors are the coach of replacement NFL players, the coach of some unlawful hooligans, and the coach who delivered one of the most shared motivational speeches.

https://www.youtube.com/watch?v=4pZHXQ698Ok I said you need to strive to be better than everyone else. I didn’t say you needed to be better than everyone else. But you gotta try. That’s what character is: It’s in the try. -Eric Taylor https://www.youtube.com/watch?v=i3O-kYwM8qY When the Washington Sentinels left the stadium that date, there was no tickertape parade, no endorsement deals for sneakers or soda pop, or breakfast cereal. Just a locker to be cleaned out, and a ride home to catch. But what they didn’t know, was that their lives had been changed forever because they had been part of something great. And greatness, no matter how brief, stays with a man. Every athlete dreams of a second chance, these men lived it. -Jimmy McGinty [socialpoll id=”2230223″]

Tony D’Amato (Any Given Sunday) vs.  Nate Scarborough (The Longest Yard) 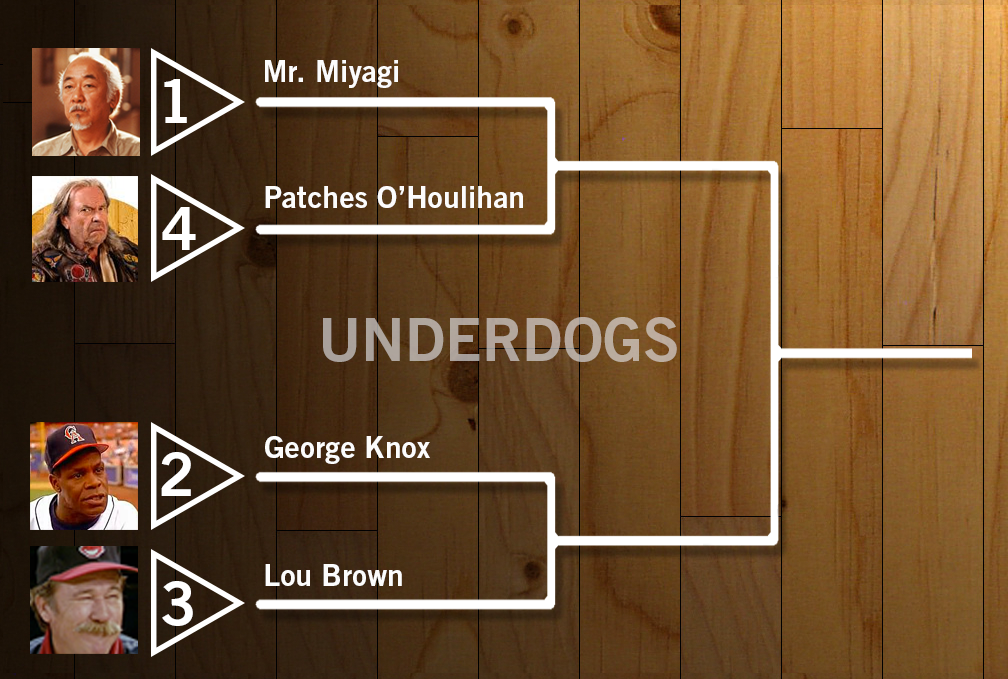 These coaches weren’t working with the most talented of players but were able to get the best performances from them. Mr. Miyagi has to be a strong candidate to make it out of the Underdogs, but he’s playing against a coach from a true underdog story. Lou Brown rallied his team of underdogs to fight back against an awful owner, and George Knox had true faith in his team despite their talent.

https://www.youtube.com/watch?v=Bg21M2zwG9Q We make sacred pact. I promise teach karate to you, you promise learn. I say, you do, no questions. -Mr. Miyagi https://www.youtube.com/watch?v=1ZXHsNqkDI4 If you’re going to become true dodgeballers, then you’ve got to learn the five d’s of dodgeball: dodge, duck, dip, dive and dodge! -Patches O’Houlihan [socialpoll id=”2230226″]

https://www.youtube.com/watch?v=yXeH4NS9G8M In baseball we use signals. Make some kind of signal. I can’t come over here every couple of seconds. -George Knox https://www.youtube.com/watch?v=DnVrSZHnvYY OK, we won a game yesterday. If we win today, it’s called “two in a row”. And if we win again tomorrow, it’s called a “winning streak”… It has happened before! -Lou Brown [socialpoll id=”2230227″] Submit your votes. Help your coach on to victory. We’ll be posting the winners from Round 1 early next week. At the end of these four rounds, we will have a definitive answer to the question, “Who is the greatest fictional coach?” Were there some cuts from this bracket? Unfortunately, yes. Honorable Mentions include: Bobby Finstock (Teen Wolf), Reggie Dunlop (Slap Shot), Jackie Moon (Semi-Pro), Bud Kilmer (Varsity Blues), Conor O’Neill (Hardball) and Coach Klein (The Waterboy). [maxbutton id=”4″]

All My Posts
Coach Resources

Can you be a champion without winning the championship?

We’re back! Coach Vincent had a ton of wonderful things to say about baseball, effort, and improvement, so we’ll keep our introduction to a minimum

In evaluating and teaching high-speed running mechanics, a coach must give you key points consciously focus on as you learn to reprogram your motor patterns. It is useful to break down the movement in a way