I am writing this article in the attempt to reach as many parents of kids that love basketball as possible. I hope by the end of this article I have provided you with some guidance and direction on how to better help your child’s journey through the land(mine)scape that is AAU basketball in 2016. My name is Paul O’Connor and I am what you would call a junkie, basketball junkie that is. Basketball has been at the center of my life, from the first time I began playing at age five, to coaching at the collegiate level at schools across the country. I played AAU, watched AAU, recruited AAU, and now run an AAU program in New York City.

The other day, I was scrolling through twitter and found a parent of a child in Florida discussing some of the local AAU teams and the tactics they have used on some of the kids in that area. About 50 tweets later, I was fully immersed in a pretty typical conversation of any parent nowadays that has a child in the AAU circuit. Some complaints were about sponsored AAU clubs making kids purchase gear.

When a club becomes sponsored, that means that brands like Nike, Adidas, or Under Armour have decided to provide free gear for the players and staff of that program. Each club receives an allotment every year (some more than D1 college programs) and they then give this to all the kids in the program. You can see now to turn around and charge kids for free gear is not only flat out wrong, it’s embarrassing. This is one of many different things that bad AAU clubs can do to scam people.

So, your child wants to play basketball and is good enough to make an AAU team, congratulations! It’s an exciting time and you should be proud. First things first, breathe, relax, and enjoy the ride. I mean this sincerely: AAU basketball does not become serious until your child’s junior year in high school. The first thing you need to do is select a program. This obviously is the hardest part. I’m going to list the most important criteria of a program as well as major things to avoid.

Find a program that has coaches with an actual coaching background.

A running joke amongst college coaches who watch AAU games is how horrendous the coaching often is at the AAU level. See here for this dedicated twitter account to it — AAU Bingo. Do your research, meet with the coaches, ask them where they have coached, who they have coached, and, most importantly, why they coach.

Do the coaches or operators of the program have a solid grasp on the NCAA academic requirements to get into D1, D2, D3 schools?

I’ve seen kids miss SAT tests to play in a tournament, eventually not qualify, and then have to go to a JUCO or a Prep school. Again, ask questions early and often. OK, so they understand the requirements, but can they help?

One of the best programs in NYC, and in the country as a whole, is New Heights. They have a comprehensive program that offers tutoring and academic support on top of basketball. Your child could be the #1 player in the country, but if he can’t get into school, none of that matters.

1. If you hear, “we’ve placed over 20 D1 players,” you should run
Not only is this sentence completely meaningless, it could have nothing to do with your son or daughter. Do not obsess with the level, D2 and D3 schools need players the last time I checked. When you hear that, follow up with this question: how many of those players transferred after one year?

2. “I promise.”
This should probably be number 1, just for how overwhelmingly prevalent this issue is. If an AAU coach, or any coach for that matter, starts promising things, you are sliding down a slippery slope. When I meet with my parents, I tell them that I promise their kids will have fun, be safe, and improve.

No playing time, no gear, no money, none of that.

3. Find out how long kids stay in their program and why they leave
My program has just one hard policy: if you leave to play with another program, that is totally fine, but you cannot come back to us. This jump around culture promotes selfishness and only leads to kids knowing one response when things get tough — leave. This contributes to the D1 transfer epidemic currently happening in college basketball.

This is not an easy or honest business and, sadly, that is what it has become: a business. Parents you need to educate yourselves, do your research, and find someone you can trust to not only be a coach to your son or daughter but an advocate throughout their entire career — whether they stay in their program or not.

Feel free to email me at anytime if I can ever be of any help, paul@kidsinthegame.com. 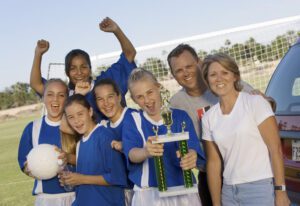 Have you ever been to one of your child’s games and observed parents who were rather annoying spectators? After 20 years of being a sports

How To Throw The Hammer

The hammer, for all intents and purposes, is one of Ultimate’s riskiest and flashiest throws, a delicate, intricate move that flips everything you thought knew

Glute Activation for Athletes You’re an athlete, that’s why you’re here. You run, sprint, jump, and are constantly changing directions during your sport. These movements