How To Add 50 Points To Your Batting Average

The law of averages tells us as baseball players that we will make an out at least 7 times over a 10 at-bat stretch. That’s a 30% success rate. In no other sport and in no other profession is such persistent failure even remotley close to success. Imagine a heart surgeon with a 30% success rate!

Baseball has always been ‘a game of failure’. But what if you had a way to take the clear cut advantage away from the pitcher and increase your probability of a hit?

Here are a few tips for increasing your batting average:

Cut the plate in half. 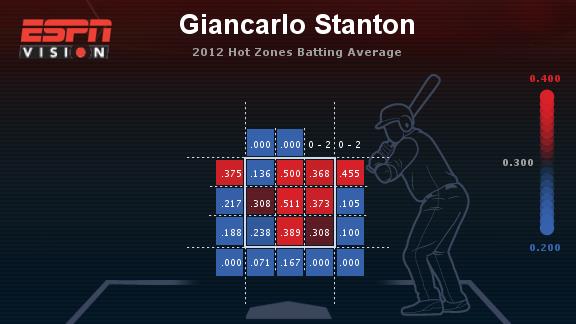 Which side of the plate do you think Giancarlo Stanton is taking?

If you have advanced knowledge of your opposing pitcher’s tendencies and want to attack a side of the plate based on that, then own it.

Break it down, doing this will automatically increase your chances of a hit by almost 50%, especially at the amateur level. Most pitchers are not overpowering at lower levels. In fact, more than half the time, the hitter is getting himself out. By chasing pitches that are out of the zone or something that you can’t handle, you are setting yourself up for failure. Keep it simple. The pitcher is less likely to get you out if you swing at a pitch that you are more likely to get a hit on.

Swing at your pitch.

With anything less than two strikes, you should only swing at your pitch. What is your pitch? Your pitch is that pitch where you can close your eyes and picture yourself hitting a long way. My favorite was low and inside. Get to a point where you can identify that pitch as soon as it leaves the pitchers arm and do a lot of damage.

The immediate benefit of following this philosophy is that a batter will probably get in better hitter’s counts: 1-0, 2-0, 3-1, etc. In counts like this, a batter is more likely to see fastballs, which can be more easily handled as opposed to breaking pitches.

By cutting the plate in half and only swinging at your pitch, I can promise you that you will find yourself in more hitter’s counts. But a dangerous mindset to have is that the advantage is yours as a hitter once you reach these counts. Just because you work a count to 3-1 or 2-0 doesn’t mean you should expand your zone and become more aggressive. If anything, be more selective.

When you do decide to take a swing in a hitter’s count, make it worthwhile. Too many of my younger players get into a great hitters count, only to take a weak hack at a ball outside of their selected zone. You know the type – shoulders flying out, way out on their front foot, two strike looking swing. Look to make a difference in the game with that one swing of the bat!

Getting Out of a Slump

Even the best baseball players have bad games. And sometimes that bad performance can last days, weeks, or even months! Most call that series of

This week, we get to know boxing coach Greg L. Greg has over 35 years of experience in the sport as a boxer, trainer and