The following two part article was submitted to CoachUp from high school football coach Doug H.  Doug has been coaching high school football in Michigan for over fifteen years and has helped countless quarterbacks, wide receivers, and running backs take their games to the next level.  As you continue reading, Doug will share his knowledge of the game as well as football coaching tips for your offensive schemes.

The 3 x 1 formation is an offensive set that puts your best athlete in a position to use his explosive movements in space. The quick slant on the single receiver side puts the defensive back on an island. The defensive back will be asked to tackle a dynamic receiver in open space. 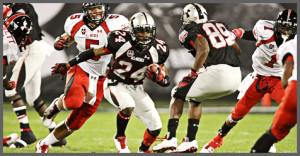 The three wide receiver side has endless combinations. An offensive coordinator can run highly effective screens, flop calls, and running plays that use motion to put your electric back in high gear to destroy any defensive scheme.

To become a precision-timed passing attack your quarterback and wide receivers will have to put in endless repetitions. Timing is critical. The shotgun snap must ignite the play. The snap has to be crisp and accurate to the quarterback. If the snap is low, high, or off to the sides, the timing of the quick passing game will be compromised. Once the quarterback receives the snap he must find the laces of the ball while making his read downfield. Once a decision is made the quarterback must fire the ball with laser like accuracy. 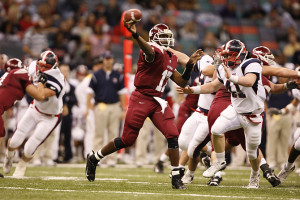 On the third step of the slant I have my receiver “stick” their route. A stick move is a pressure step by the right or left foot depending on what side of the field the receiver is on. This pressure step will give your receiver an explosive base to accelerate into the slant.

The quarterback must watch the cornerback closely, because the DB will start to jump the slant in an attempt to intercept the pass. Once I see this I call for the Slug-go route. This means my wide receiver will accelerate into his slant via the pressure step. He will then take three more steps and stick his route again and break vertically up field. My quarterback pump fakes after the first stick move. The defensive back will bite on the slant as my wide receiver accelerates up field. The defensive back is so far out of position from jumping the slant he will never recover as your receiver scores an easy touchdown.

THREE RECEIVER SIDE: As mentioned above all wide receivers must explode out of their stance. The three receiver side starts with my X receiver who is lined up five yards from the tackle and off set approximately four yards off of the line of scrimmage. The X receiver runs a nine route which we tag as the Home Run Shot. The X will also help occupy one of the safeties in cover two. I am hoping the safety nearest the single receiver side will cheat over to defend against the Home Run Shot. We will discuss this further, later. My T receiver will line up on the line of scrimmage five yards away from my X receiver. My T receiver will run a 12 yard corner route. The T receiver will be the least likely to receive the ball. 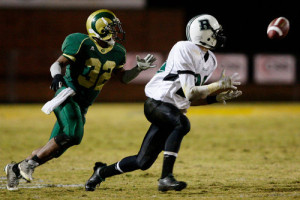 My Y receiver will line up five yards from the T receiver and off the line of scrimmage approximately four yards back. The X and Y should line up directly across from each other. The Y receiver will run a four yard drag route. The four yards is reached after crossing the line of scrimmage. The Y will use a speed cut break into his route and run underneath the linebackers. This route is usually wide open. Lately I have been putting an explosive receiver to run the drag, because no one accounts for him on the defensive side until the ball is caught. I will use a Flop call. This tells the Z and X receivers to Flop positions. I like the Z and X to have similar body types. I am trying to fool the defensive coordinator here. I typically use a Flop call in the second half after adjustments are made by my opponent. I will also run a screen from the three receiver side. I target my Y receiver and use a X blocking technique. My Y receiver will take three steps forward and then retrace his steps backwards. The quarterback will throw the ball to the Y receiver. My X receiver will abandon the Home Run Shot and block the cornerback assigned to the Y receiver. My T receiver will block his cover down. This means the defender over the X receiver has a lot of ground to cover to tackle my Y that just caught the ball.

Every time you take your children to practice or a game, they take with them some very important pieces of equipment that will help they play the game.

4 Tips for Running in the Heat

On a hot summer day, you might be running on a treadmill in a cool air conditioned gym and wonder how people could possibly be

What Youth Athletes Can Learn from Johnny Manziel

Johnny Manziel.  Johnny Football.  The first college football freshman to win the coveted Heisman Trophy.  He has been a constant headline on many sports pages.