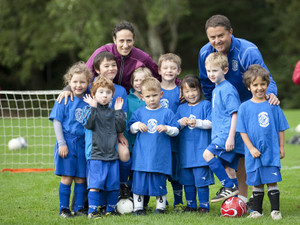 Tell us a little about your background in soccer:

I started playing soccer when I was 5 years old. I actually started going to games when I was 4 and I would chase the ball when it went out of bounds and would hand water bottles to players when the were subbed off. The coach thought I hustled more on the outside of the field than the players that were on the field playing the game, so he gave me a shot at playing. I am 46 years old now and still have not stopped playing! I played with a team from the neighborhood that my father coached. I played on the varsity team in high school and was voted as captain and an “All League Selection” as center midfielder.

Every week I would go to the local indoor soccer center and beg teams to let me play. By 13 I was playing consistently with Adult teams. By 16 I was a referee and buying my own shoes and paying for my indoor teams. Often after refereeing 3 games in a row I would stay and work on my game for a few hours more with anyone that I could find. Sometimes that was just my dog.

My freshman year in college we won the NWAAC championship. That season I suffered my fourth injury and did not play again. That is when I turned to coaching.

Now I have over 40 years of soccer experiences to draw from while coaching. Just last season my BU12 team won the State Challenge Cup. I still play almost every day and coach 3 teams and many individuals.

Why did you decide to become a private coach?

I was out of work and a friend of mine asked me what do you know more than any other thing in life. I thought for moment and said soccer. He then asked me how long I had been playing. I told him over 20 years. He said I had more than 20 years of experience then! That gave me the confidence to share what I did know as a coach.

Who is your favorite coach and why?

My father because no one ever cared more about me and my teammates.

What’s your favorite moment in your athletic career?

Watching the old NASL Sounders in awe of a new goal scoring English international player Peter Ward wishing I was as good as him. Suddenly the league folded, and he showed up to play on my men’s team. I was star struck and in the first drill at practice I accidentally pushed the ball through his legs and then scored. All the while feeling weak in the knees and thinking, “wow” he is mortal.

Do you have any success stories from coaching?

I have had players go on to play professionally, placed many players on college rosters, coached national team players and coached players who played in college national championships.

Other success stories: Shiners soccer camp, where I got more than 100 participants play soccer with various disabilities.

What other sports or activities do you enjoy playing or practicing?

I love tennis and basketball.

What is your favorite sports related movie?

Do you have a favorite saying?

Do you have any special talents or a surprising thing someone might not know about you?

I love to garden in my free time.

All My Posts
Football

Smarter Training For Better Performances In this brief slideshow, I want to highlight pictures related to big concerns and growing problems within the world of

The Importance of Hydration

Hydration is very important part for athletic performance, and as an athlete, your hydration levels should be monitored according to intensity of training, duration, frequency,

When parents back off and let children fight their own battles, especially in the arena of youth sports, it is inevitable that those kids will