Women’s lacrosse is played with 12 girls on the field from each team. In order to better understand the roles of the different positions, as well as where they are on the field, it is helpful to understand the layout of the playing surface. A women’s lacrosse field is typically 120 yards in length and 60 yards wide, with a center circle and a half field line. There are two restraining lines in each half. Each restraining line is 30 yards from it’s respective goal. At any given time, there may only be a maximum of seven offensive players and eight defensive players (including the goalie) in this area. 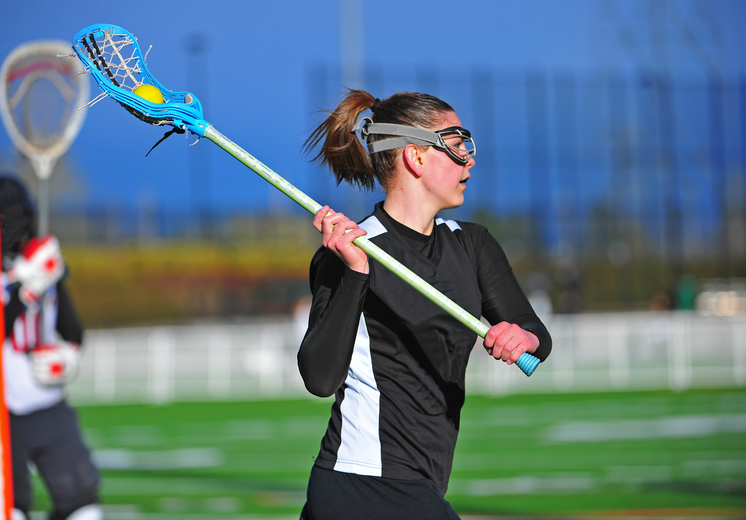 A circle known as the crease surrounds the goals, and in front of the goal is a 12-meter fan (semi-circle) used for administering minor fouls. Inside the 12-meter fan, is the eight-meter arc. Within this arc, defenders must be within a stick length of their attacker. The critical scoring area is an unmarked area 15 meters in front of the goal, 15 meters on each side of the goal and 9 meters behind it. Defenders in the critical scoring area have to allow the other team’s attackers a free space to the goal when they are on offense.

Attackers
There are three attackers, five midfielders, three defenders and one goalie. The three attackers line up in a straight line just beyond the restraining line in their attacking half of the field. These three positions are called 1st home, 2nd home and 3rd home. These players are typically the team’s goal scorers. Their role is to get into scoring positions around the goal.

Midfielders
The midfielders consist of two defensive wings, two attacking wingers and one center. When a face off takes place, the defensive wings line up just outside the center circle on the defensive half of the field. The attacking wings line up on the outside of the center circle in the other team’s half. The center stands in the middle of the circle and takes the face off. The midfielders are the team’s primary ball carriers and control the pace of the game. Because they have to play both offense and defense, these girls must be extremely fit in order to cover the whole length of the field.

Goalie
Finally, there is the goalie, who stands in the crease. The goalie is the only player that is able to touch the ball with her hands, but she may only do so while inside the crease. Once the goalie gets control of the ball she has ten seconds to either pass the ball to a teammate or to run it out of the crease herself.

Be prepared for the biggest moments by mastering the small ones off the field!

All My Posts
Videos

Football Tips: How To Run The Stop Route

Step-by-step football instruction on how to run the stop route to create separation from the defender to better position yourself to make a catch. Make

“I wouldn’t say anything is impossible. I think that everything is possible as long as you put your mind to it and put the work

Affordable and Accessible: The Trend of Private Coaching

Across the country, private sports coaching is on the rise. Athletes and parents have realized just how affordable and accessible one-on-one sports instruction is.  From young