You’re telling us it’s time for Halloween again? Pictured above, of course, is our wonderful team in 2014 celebrating this wonderful holiday in our wonderful city. Basically, CoachUp takes this day very seriously, so what better way to display our love than by combining sports and costumes? Yes, that’s right — our Weekend Fun gets spooky this time around! We’ve done our research and found some Halloween-themed races from around the country so you can take on the world in your favorite disguise. These events range from casual, family-fun activities to half-marathons, so there’s a race for everybody on this page. We’ve got pumpkins, zombies, and superheroes — the only real question is: which one will you choose? The Great Pumpkin Haul — Lone Tree, Colorado, October 24th If you’re looking for a great way to get the whole family involved, look no further than Lone Tree’s The Great Pumpkin Haul! This laid back, 2-mile trek takes you through scenic Colorado as you carry a giant pumpkin from start to finish. Not only do they have plenty of race awards ranging from “Fastest Hauler” to “Best Costume,” but they have hot apple cider and a corn maze at the finish to boot.  You can find more details about the race over here. Difficulty: 1 out of 5 pumpkins Panic In The Dark — Lowell, Massachusetts, October 24th Panic In The Dark is a nighttime obstacle run in which your physical and mental strength will be tested again and again. Armed with only a headlamp, the runner must avoid the course zombies and their nervous thoughts! Climb, crawl, and cry your way through a pitch black course and struggle to survive your chasing enemies. If I wasn’t afraid of the dark, I’d be all in on this one, but for braver contestants, you can register here.  Difficulty: 5 out of 5 pumpkins The Haunted Half — Various Locations, Various Dates Rated the number one Halloween Race by Runner’s World in 2014, The Haunted Half is back for another full slate of races! No matter your skill level, athletes will be able to find enjoyment with this playful race and post-run fun. And, if you’re feeling adventerous, you can sign up for both the Salt Lake City and Provo race for a discounted price. You can find more information about their races, charity, and overall vibe here. Salt Lake City, Utah — October 24th Provo, Utah — October 31st Phoenix, Arizona — October 31st Difficulty: 3 out of 5 pumpkins The Devil’s Chase —  Salem, Massachusetts, October 31st Athletes from all over the world will travel to Salem this year to complete in this 6.66 mile race through the eerie town and its landmarks. This race is in its 7th year and they’re very excited that it falls on Halloween this time around! Every participant will receive a dry fit long sleeve and a finisher medal with additional prizes on the line for more serious racers. What other races can often this much fun in such a creepily historic location? From costumes, tradition, and history, this race has it all! All information about The Devil’s Chase can be found on their website. Difficulty: 3 out of 5 pumpkins The Monster Dash — Various Locations, October 31st Classified as fun runs, these midwest races have become really popular over the last few years. Monster Dash races come in 5k, 10k, and half marathon sizes, so athletes of any skill level can participate! From special zip-up jackets to trick or treating at the water stations, the Monster Dash has a little something to offer to any athlete. Add in costumed racers and a contest to find out who wore it best and you’ve got an absolute winner. Chicago, Illinois — October 31st St. Paul, Minnesota — October 31st Fort Worth, Texas — October 31st Difficulty: 4 out of 5 pumpkins The Zombie Run — Various Locations, Various Dates This is a similar race to Panic In The Dark, but has gained popularity across the nation. As of now, the only two left this year are in Denver, CO, and San Diego, CA, which is perfect for our athletes out West that need to scratch that race itch! Can you not only finish the race, but out pace your enemies? Avoid zombies, win the race, have fun — that’s a pretty cool motto, can you handle it? Denver, Colorado — October 30th San Diego, California — November 7th Difficulty: 5 out 5 pumpkins Halloween Half Marathon Series — Various Locations, Various Dates This race isn’t for the faint of heart! The Halloween Half Marathon Series has expanded since it was first run in 2009 and now has six locations down the East Coast! If you’re involved with running on a deep level and have an admiration for this wonderful month, the Halloween Half Marathon might be your calling. Complete with a collectable yearly medal, this race will have you coming back for each new iteration and challenge. Key West, Florida — October 18th Miami, Florida — October 24th Petersburg, Virginia — October 28th Fayetteville, North Carolina — October 31st Atlanta, Georgia — November 1st Difficulty: 5 out of 5 pumpkins So, at the very least, there seems to be a race for athletes of every skill level! If you’ve been training hard all fall and need a venture to show it off in (and your awesome superhero costume) then one of these races might be the perfect use of your weekend this month. Even better, most of these races come with free race swag, a medal for finishing, and part of your registration fee typically goes to some awesome charities! Add in some corn mazes, zombies, and pumpkins along the way and there’s no better way to exercise this month. If you compete in any of these races, send us a picture and we’ll shout you out on our Twitter! Best of spooky luck this weekend! 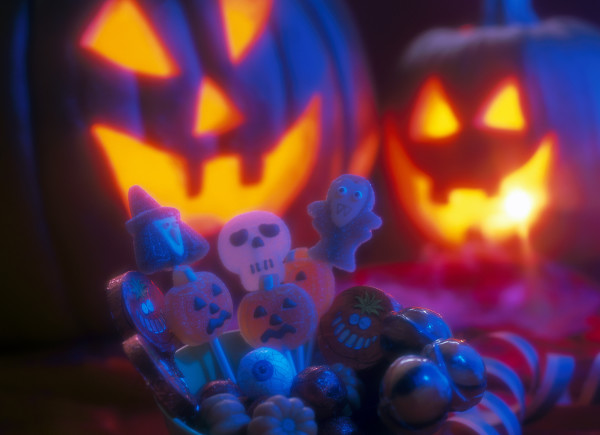 Friday, October 16th: ALCS, Game 1, Toronto Blue Jays vs. Kansas City Royals, 8:07 EST, FOX How many people predicted a Blue Jays and Royals ALCS? The chances of that were pretty unlikely at the start of the season and even more unlikely before the Blue Jays traded for David Price and Troy Tulowitzki close to the deadline and ripped off an AL East-climbing run. And now, following one of the most epic innings of all-time and a bat flip worthy of the Hall of Fame itself, the final two stand. Listen, there’s a good chance you’ll tell your grandchildren about this series, so make sure you’re in it from the first pitch on. Eric Hosmer vs. Jose Bautistia, David Price vs. Johnny Cueto — what’s not to like? The Royals are looking to avenge their tight World Series loss from last year and the Jays are hoping to make the ‘chip for the first time since 1993. Who do you got coming out of this slugfest? Saturday, October 17th EPL, Tottenham Hotspur vs. Liverpool FC, 7:45AM EST, NBC Now that the International Break is done and dusted, we return to our regularly scheduled EPL games. This week, we’re highlighting the Spurs vs. Liverpool for a couple reasons — the first of which is simple as two usual English powerhouses go head-to-head in hopes of jumpstarting their disappointing seasons. Last season, Tottenham and Liverpool finished fifth and sixth, respectively, but now find themselves in eighth and tenth. Which one will add a much-needed three points to their Champions League race? The second reason, of course, is because we’ll get to see Jurgen Klopp’s English debut. The former Dortmund man didn’t continue at the German outfit after a miserable season in 2014-2015, but helped lead the former mid-table team to two league-topping wins over world powerhouse Bayern Munich in both 2011 and 2012. Can the new Liverpool boss get things started on the right foot? NLCS, Game 1, Chicago Cubs vs. New York Mets, 8:07 EST, FOX The Chicago Cubs and New York Mets kick off their best of seven series for the right to play in the 2015 World Series. Wow, can you believe I typed those words in that order and didn’t explode? Maybe Back To The Future was on to something after all… This week, the Cubs and Mets knocked off two of the National League’s perennial powerhouses in St. Louis and Los Angeles, much to everyone’s surprise. The Cubs are smashing everything out of the park and the Mets are manufacturing runs anyway they can — so it will be interesting to see how they’ll match up. What will happen when this slugging Cubs team goes up against this Mets’ pitching rotation? Fireworks in The Big Apple are guaranteed this weekend, so don’t be the only one missing out! Sunday, October 18th NFL, New England Patriots vs. Indianapolis Colts, 8:30 EST, NBC Unless you’ve been living under a rock, this is the game the New England Patriots, and our Julian Edelman, have had circled on their calendar since they won the Super Bowl last February. Of course, it was the Indianapolis Colts that kicked off the DeflateGate scandal during and after their AFC Championship butt-whupping. It hardly matters how you feel about the Patriots, Tom Brady, or the entire fiasco, but this game is our Must-Watch Match-Up of the week. Would anybody be surprised if the Patriots were winning 50-0 after the first quarter? Nope, I’m not going to bet against the Patriots a single time during their 2015 Revenge Tour and you shouldn’t either.

Want to defend the break away like a pro soccer player? Check out Soccer Tips: Defending 1v1 with Matt Besler, a member of the United

5 Quick Tips for Learning How to Rally in Tennis

It is not uncommon for kids, and adults for the matter, to struggle to keep the ball in a rally when they first start. Whether

Believe it not, you might be overstepping your boundaries as a parent at your child’s youth sports game. In fact, you may not even realize