There is an ongoing debate amongst baseball instructors over the appropriate swing angle at which to approach the baseball, and perhaps more importantly, how to teach that approach. Two of CoachUp’s baseball coaches weighed in on the topic.

What do Josh Donaldson, Mike Trout, Bryce Harper and Miggy Cabrera have in common? All of these MLB superstars can hit the ball out of sight. So the question is:  How do they achieve these gravity defying results?

It is a common misconception among younger baseball players that a batter must upper cut, or “swing up”, to hit the ball in the air and make it go far. Countless times I have heard players at clinics, camps and lessons talking about a major league ball player they saw on TV the night before and an upper cut swing.

“Did you see how far Bryce Harper’s homer went?”

“That’s because he has an upper cut.”

Not only is that false, but the physics of an upper cut swing will actually make a hitter swing and miss more AND drive the ball less distance!

Having an upper cut swing will result in a batted baseball having topspin. Topspin is the end product of the bat coming from below the baseball and striking it in an upward motion. Topspin on a ball propelled through the air imparts a downward force that causes the ball to drop.

You are now asking:  How do I create backspin and hit further?

Creating backspin on the baseball is the secret to hitting the ball a long, long way. I initially resisted this line of thinking; it wasn’t until I embraced this philosophy that I started hitting balls out of the yard with regularity – resulting in almost 40 NCAA homers!

If an upper cut creates topspin, then a downward angle on your swing creates backspin. Yes you read correctly, swinging down actually makes the ball go up and travel further. 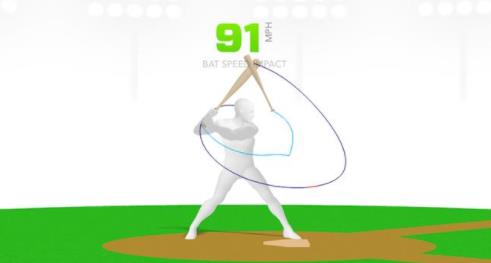 Backspin forces more pressure under the ball, thus enhancing the baseball’s ability to fight gravity and fall at a slower rate, making the baseball travel a greater distance.

The reason a ball will not get beat into the ground by swinging down through the ball is because the ball and the rounded spherical shape of the bat counteract the downward motion of the swing. The ball will “roll” off the bat either with topspin or backspin.

A great way to put the “swing down” theory to the test is to place a bucket 4-5 feet in front of a batter during batting practice or tee work. Tell the hitter to try to hit the ball either in or off the bucket by swinging on a downward plane. After about 10 pitches, the batter will be trying his or her hardest to hit the bucket, but begin to realize that it is next to impossible! The downward motion of the bat is simply putting too much backspin on the ball and making it travel too far!

The Takeaway:  To make the ball travel farther, work on swinging on a downward angle to create backspin.

A hitter’s bat should strike the baseball at an upward angle of 6-10 degrees to both increase the hitter’s margin for error on the pitch and the ball’s maximum potential exit velocity.

If you look at video of any great hitter in the MLB, such as Mike Trout, Bryce Harper, or Miguel Cabrera, you will noticed that their bats do, in fact, strike the ball at an upward angle.

I did not do the math on this; however, I am a firm believer in the application of science to the game of baseball, and gear both my coaching and training regimens to what they suggest. Here is the math on why this is true.

To explain it without the math, we must understand the goal of the hitter while he is at the plate. We want to:

I like focusing on these as goals because balls that are hit harder are more difficult to defend, whether or not the ball is in the air or on the ground. Furthermore, balls hit in the air have a better chance to become a base hit. Check out the data from Major League Baseball on that subject.

All the data and “nerdy” stuff aside, we as coaches still want to make players better and the trick of the job is knowing what to say and how to say it. Players are all different and need unique movement cues to concentrate on when trying to change mechanics.

A player might need to be told to swing down in order to get his bat on plane to square the ball up.

A bit of reading with some data and scientific proof has given me a good guide as to how to both train myself as a player and the players that I work with. The trick is to have a solid set of principles that your players understand, why you believe these things, and how to apply them to those who work with you.

To read more on this topic from Jordan Serena, you can read his the article titled Understanding Your Personal Beliefs on Rogue Baseball Performance.

All My Posts
Coaches

As a parent of athlete, you have a lot of thoughts and questions running through your mind. First, your biggest concern is (or should be)

Dad, what example should I follow? I’m at home with my son and we’ve had a major disagreement. In other words we’ve had a fight.