The first week is complete in our search for the greatest fictional coach of all time. There weren’t too many surprises. There were only two matchups in which the lower seed didn’t win.

Gordon Bombay (1) vs. Danny O’Shea (4) Gordon Bombay of the Mighty Ducks easily beat Coach Danny O’Shea of the Little Giants. Danny may have been able to win in the upset against his more talented brother, but he couldn’t pull it off this time.

Mickey Goldmill (2) vs. Phil Weston (3) Mickey had this matchup in the bag from the start. He won by the largest margin. It would’ve been pretty hard to take down the coach who whipped Rocky into shape. Phil went down kicking and screaming.

Mr. Miyagi (1) vs. Patches O’Houlihan (4) Mr. Miyagi could be going far in this bracket. He’ll have to get through Lou Brown next. RIP Patches.

George Knox (2) vs. Lou Brown (3) George Knox didn’t have the angels on his side in this one. Lou Brown quickly pulled ahead and won. 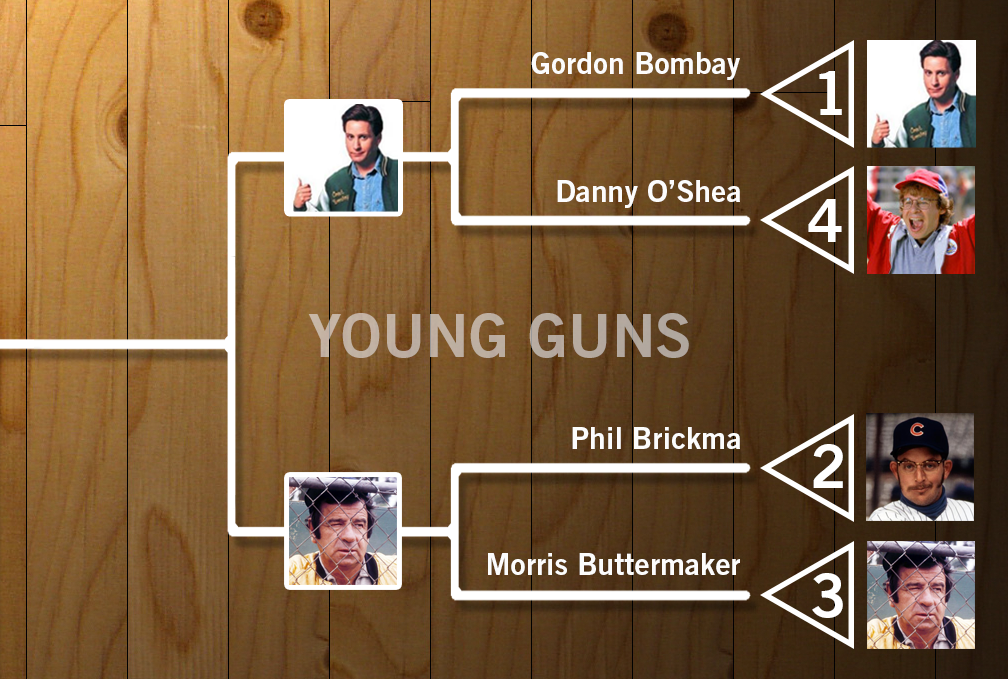 We have a decent matchup here for the Young Guns. Will it be Gordon Bombay or Morris Buttermaker coming out on top? Neither coach was particularly interested in coaching a team when first put into a coaching position (Gordon Bombay’s coaching was court mandated), but they grew into fine coaches who were able to lead their teams to success, whether it showed on the scoreboards or not.

https://www.youtube.com/watch?v=ZyVF1glhAfk “Have you guys ever seen a flock of ducks flying in perfect formation? It’s beautiful. Pretty awesome the way they all stick together. Ducks never say die. Ever seen a duck fight? No way. Why? Because the other animals are afraid. They know that if they mess with one duck, they gotta deal with the whole flock. I’m proud to be a Duck, and I’d be proud to fly with any one of you. So how about it? Who’s a Duck?” -Gordon Bombay http://youtu.be/K2qNJ7IzzqE All I know is when we win a game, it’s a team win. When we lose a game, it’s a team loss. -Morris Buttermaker [socialpoll id=”2232481″] 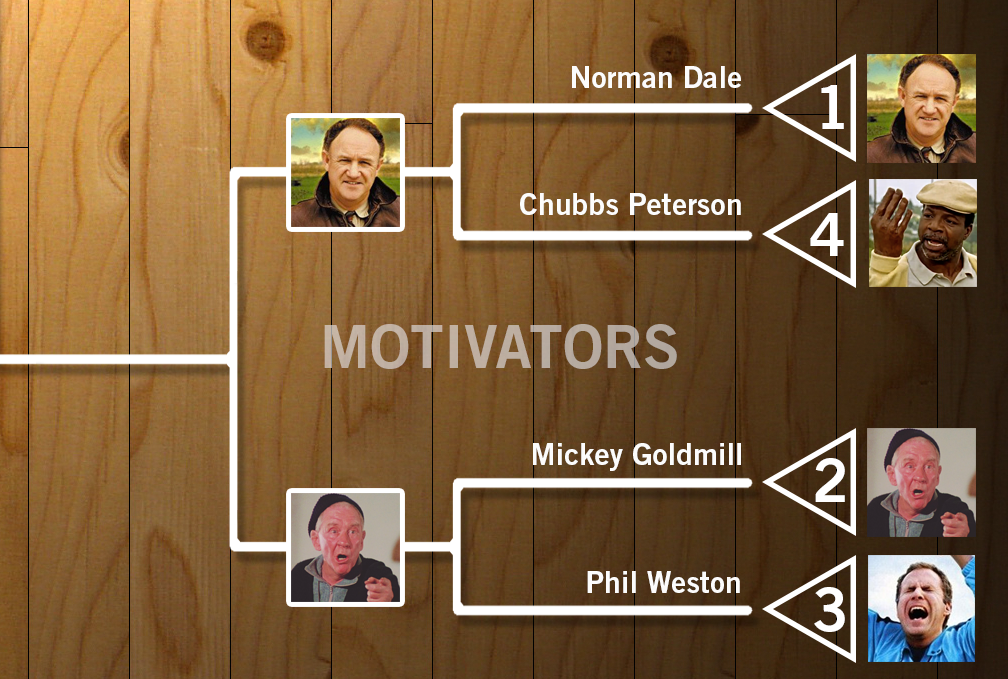 This might be the best matchup we’ve seen yet. Norman Dale focused on the fundamentals. He taught his team to play to their potential. Mickey Goldmill converted a loan shark with some potential into the heavyweight champion. Either way a great coach is going down here.

https://www.youtube.com/watch?v=H5ZBOL3M6B0 If you put your effort and concentration into playing to your potential, to be the best that you can be, I don’t care what the scoreboard says at the end of the game, in my book we’re gonna be winners. -Norman Dale https://www.youtube.com/watch?v=CObJZf2YzDw You’re gonna eat lightnin’; you’re gonna crap thunder. -Mickey Goldmill [socialpoll id=”2232482″] 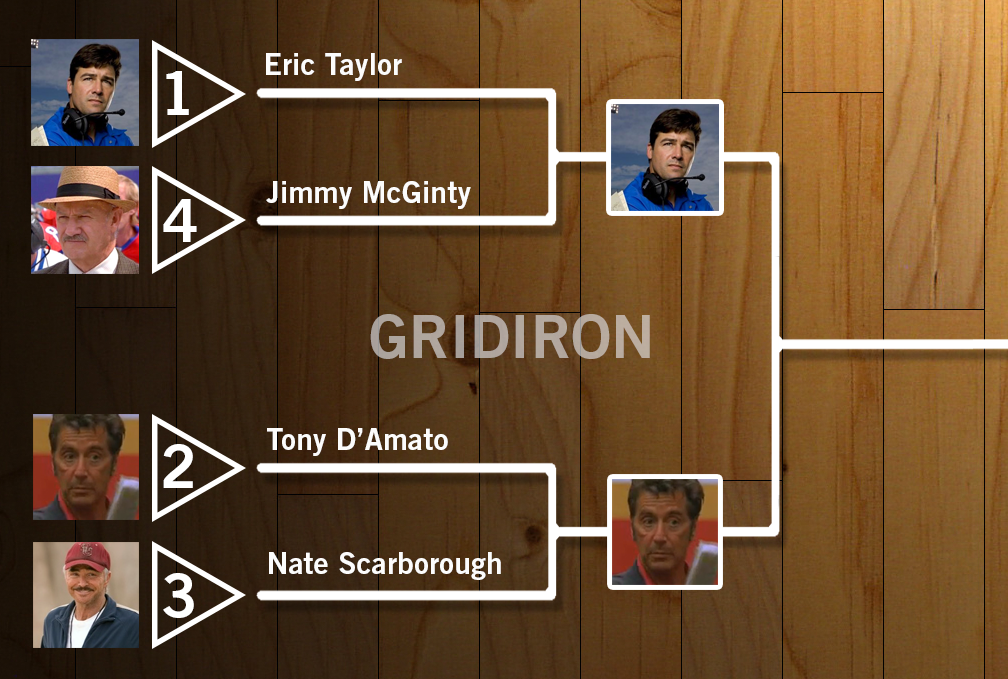 Tony D’Amato and Eric Taylor. Tony D was so devoted to his team that he neglected his family. Eric Taylor was a family man who struggled between his devotion to his teams and his family. Tony D fired his team up and led the Sharks to the conference championship. Eric Taylor had a .720 winning percentage over 5 years and won two state championships, one with the Dillon Panthers and one with the East Dillon Lions. This matchup will determine the king of the gridiron.

https://www.youtube.com/watch?v=4pZHXQ698Ok I said you need to strive to be better than everyone else. I didn’t say you needed to be better than everyone else. But you gotta try. That’s what character is: It’s in the try. -Eric Taylor https://www.youtube.com/watch?v=_b7bgtu2O4E On any given Sunday you’re gonna win or you’re gonna lose. The point is – can you win or lose like a man? -Tony D’Amato [socialpoll id=”2232485″] 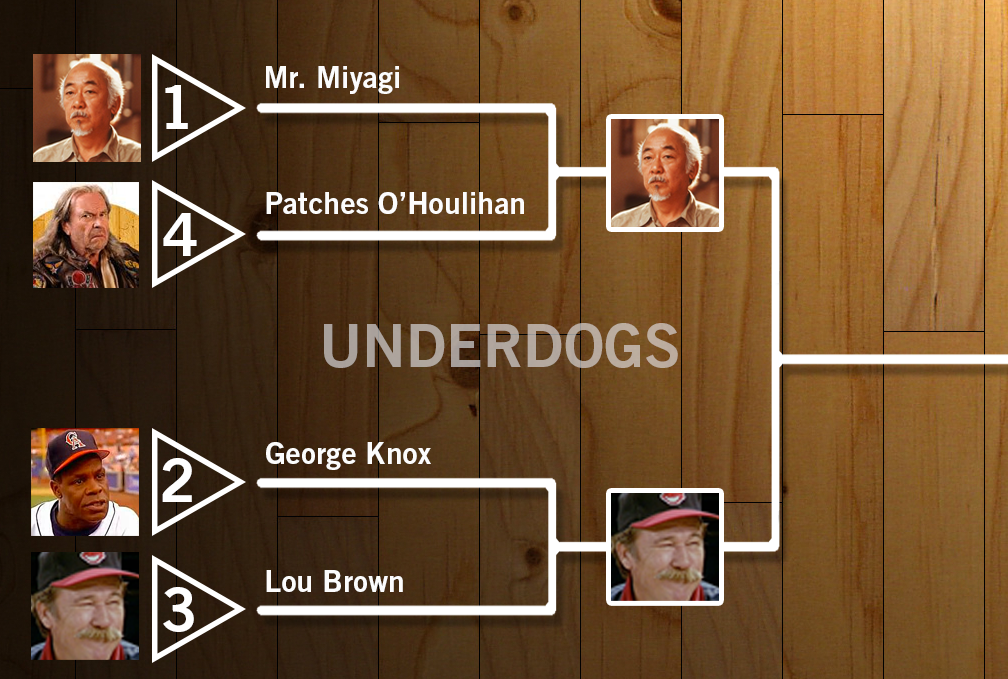 Here we have two very different coaches. Lou Brown had an interesting style of motivation, but he realized that Ricky Vaughn had poor eyesight, which once corrected with the help of some glasses, turned him into the Indians’ ace. Mr. Miyagi was a World War II vet who coached Daniel LaRusso karate as well as the life lessons of martial arts. He taught that “Crane” stance pretty well too.

https://www.youtube.com/watch?v=Bg21M2zwG9Q We make sacred pact. I promise teach karate to you, you promise learn. I say, you do, no questions. -Mr. Miyagi https://www.youtube.com/watch?v=DnVrSZHnvYY OK, we won a game yesterday. If we win today, it’s called “two in a row.” And if we win again tomorrow, it’s called a “winning streak”… It has happened before! -Lou Brown [socialpoll id=”2232488″]

Submit your votes. Who will make the Final Four? We’ll post the winners from Round 2 next week.

Form Fixes For Beginners Everyone runs differently based on their own, unique body type. Your body type can be advantageous in your running, or it

7 Reasons Why Student-Athletes Are Dominating the Workplace

Heart racing, body aching, and gasping for breath – you remind yourself that there’s no quitting now. You have already played your heart out for

5 Rock Climbing Drills and Tips for Working on Technique

Rock climbing is a sport that requires strength and balance. The sport isn’t only about climbing from point A to point B; your technique also