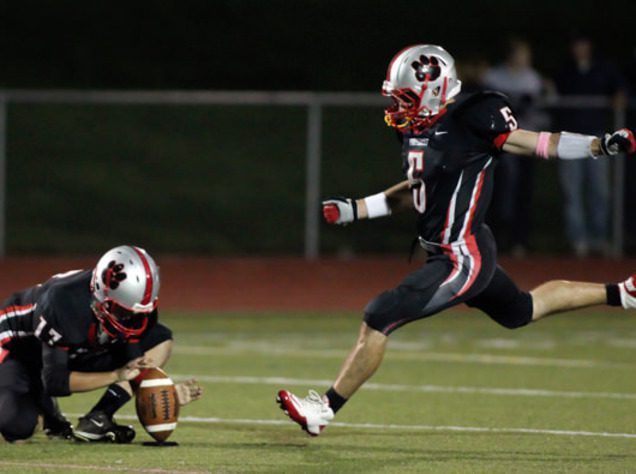 The Art Of Kicking Field Goals

Kickers often have one of the most thankless jobs in football — if they make it, great, that’s what they’re supposed to do. But if they miss a last-second field goal, then they can be blamed for losing the entire game. If that sounds exciting and exactly what you want without its demanding physical nature, then kicking is for you! However, it’s important to remember that field goal kicking is not easy and missed kicks can be nightmare fuel. Thankfully, CoachUp has put together a list of steps you can take in order to become a hero the next time your game is on the line.

Aside from the usually safe extra point attempts, kickers have a high pressure job every time they’re on the field. Too fast and the kick could be shanked. Too slow and the defense might block it. No matter the situation, try to stay mentally calm. Try not to freak yourself out, it’s easy enough to put extra pressure on yourself, so stay focused at the task at hand. Don’t think of any what-ifs or negative outcomes.

And that’s where part two comes in: be brave. Yes, kicking a field goal while everybody watches and waits for you screw up can be more nerve-wracking than the SAT, but that doesn’t mean you can’t own it! There’s a reason why you’ve been selected to be the team’s kicker and you’ve done this before plenty of times during practice. Stay focused and sharp, visualize what you want to do and then go out and do it. Having confidence in yourself is half the battle in field goal kicking — once you start doubting yourself, you’re in trouble!

Place your non-kicking foot slightly forward and take three steps towards the ball. Your third step should be planted directly next to the ball. The approach is often the trickiest part of field goal kicking for young athletes as the mental rhythm often can shake them. The best thing you can do about this is practice, practice, practice! What works for your friend might not work for you. Being conformable on the approach is important, so find what works for you and master it.

Make sure you point your planted foot towards the target before kicking, it’s crucially important for accurate kicking! For many teams at lower levels, they use a soccer player as their field goal kicker, as they’ve learned the intricate details of kicking and practice it everyday. If you want a straight, accurate kick, making sure your feet are planted and pointed in the right direction is a great start.

Additionally, your plant foot should be as close to the ball as possible. Too far in front and your body won’t be able to get enough power behind the kick before striking it. Too far behind and you’re far more likely to pull the ball across your body. Practicing great muscle memory is the best way to avoid this!

Swing your arms to help generate power from your upper body. Plant that non-kicking foot firmly and transfer that energy to the rest of your body, swinging directly and fully through the ball. Make sure your body is straight and not leaning backwards or sideways in the slightest. It may seem minuscule, but it may be the difference between a successful kick and one that is just a few inches off.

Like the footwork section, it’s just as important to practice proper follow through etiquette. To kick a field goal, your follow through should point at the ball after you’ve kicked it. If you’ve kicked it and your foot is out pointing towards the sidelines by the time it’s landed, that’s a bad thing. Think about it in terms of basketball, you wouldn’t shoot a free throw by following through towards the left baseline, right? That same principle applies to kicking field goals.

Most importantly, remember that it’s not a big deal to miss a field goal. Even the best field goal kickers in the world miss — it’s natural. Although the spotlight might be magnified on the kicker in the moment, quarterbacks don’t complete every attempt and wide receivers drop passes all the time. Even the best field goal kickers in NFL history kick below 90%. In fact, when you discount Baltimore’s Justin Tucker and Dallas’ Dan Bailey, who have just played three and four seasons each, the best percentage ever belongs to New England’s Stephen Gostkowski at nearly 87%.

You will miss kicks, that’s part of the game, so don’t be too tough on yourself. Often, once a kicker misses one, he’s susceptible to miss his next few attempts as well. Being a successful kicker has just as much to do with their mental health as it does with their legs. And while kickers can get the brunt of the blame after a loss, remember that football is a team sport and condemning one player for the mistakes of a whole is a dangerous game. If you miss, shake it off and get ready for the next one. Recognize what you might’ve done incorrectly on the last attempt and make sure it’s fixed on the next try.

The best thing a kicker can do is stay out of his own way, when it’s all said and done. Missing a kick is a natural part of football, but once you start overthinking future kicks, that’s where it begins to get dicey. Move on if you can, it’ll be best for everybody involved. Don’t start counting your steps, or micromanaging your movements — trust yourself and the process. Once you’ve got your routine down pat, try not to give it much thought other than the big picture task at hand. If you follow these steps, you’ll nailing field goals in no time.

But if you still find yourself struggling to make kicks consistently or can’t quite get the footwork down, consider hiring a private trainer. CoachUp has tons of willing helpers with loads of experience that can literally elevate your game to another level. Their extensive knowledge and technique will have you more confidently kicking the ball. That way, you can celebrate just like Justin Tucker and become the hero that everybody wants you to be — so what are you waiting for? 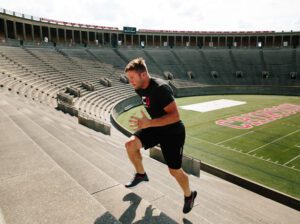 17 Ways to Get More out of Cardio

Originally posted by Joe Vennare on Greatist How useful was this post? Click on a star to rate it! Submit Rating Average rating 0 / 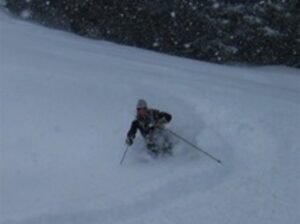 Skiing on a Powder Day

To fully enjoy a powder day, you need to really know how to ski in the deep, fluffy snow. Powder days have become a sort

Every player, whether naturally or through soccer training, has developed a dominant foot. This foot is their go-to side for passing, shooting, or kicking. While typically