Although he’s off on a cruise right now and we’re very jealous in chilly Boston, we wanted to highlight one of our wonderful interns, Jack. He’s been with us since January, offering his current student-athlete perspective wherever he can. Born and raised in Massachusetts, Jack has been a huge help since coming on and it’s always wildly appreciated. As a Customer Experience Intern, he’s worked on profile optimization, coach applications, and messages — all things that help CoachUp run smoothly. He won’t see this for a week, but please join us in recognizing Jack’s hard work — he’s been a great help to us!

CoachUp: Hey, Jack! Can you tell us a little bit about yourself?

Jack Harris: I grew up in Sudbury, Massachusetts, about 30 miles west of Boston. I graduated from Lincoln-Sudbury in 2012 and went on to Merrimack College, where I was a four-year member of the football team. I’ve worked many different jobs ranging from a summer lifeguard at a local country club to an intern with the Boston Bruins Foundation in the summer of 2015.

CU: What’s your position at CoachUp and how long have you been here?

JH: I am a Customer Experience Intern and I have been here for just about three months.

CU: What drove you to join CoachUp? Why?

JH: I wanted to join CoachUp because, as a former athlete, I wanted to be a part of a company that had a real team feel and CoachUp definitely is that!

JH: I’ve been involved in sports for my entire life. My dad is a sportswriter for the Boston Bruins, so my very first passion was hockey. I’ve played hockey, baseball, swimming, and football. Ultimately, I decided to stick with football — which I played for four years in college. 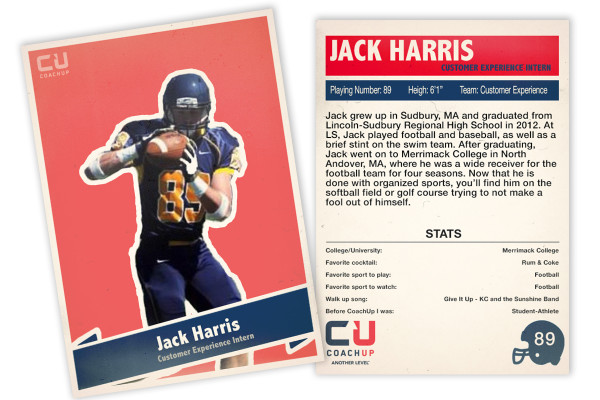 CU: What can people find you doing in your free time?

JH: Actually, you’ll find me in the classroom for a few hours a week as I still have a semester left in college! Other than that, you can find me hanging with my friends at school and trying to enjoy my last few months of school. When I’m not in class, you could certainly find me at my local softball diamond playing my new favorite sport.

JH: My favorite sports memory would probably be playing in my high school Division 1a Superbowl during my senior year. It was a great game, despite that fact that we lost, and I was lucky enough to catch a touchdown. Winning the state championship in baseball the year before is also way up there!

CU: What’s one thing about you that not a lot of people know?

JH: One thing about me that not a lot of people know is that I’m a big Star Wars fan. I’ve seen The Force Awakens five times in theaters if that’s any indication…

CU: Who in the office would you want by your side in a 2-on-2 basketball game + why?

JH: I would have to go with my fellow intern, Kenny. We work together on most things in the office, so it would make the most sense for us to be on the same 2-on-2 team. Plus, his college career would definitely mask my complete lack of basketball ability, right?

Today, there is very seldom an offseason when it comes to youth sports.  When there is, it may be very short.  However, the offseason is

Benefits Of Resistance Training Contrary to popular belief, resistance training does not always mean bulking up. While Olympic lifters and bodybuilders work out to increase