We’re really excited for Coach Jared’s return to the USA! In fact, we were so excited that we couldn’t even wait for him to get off the plane before hitting him up for an interview. Jared has been playing baseball for his entire life — now, in the midst of his prime, he’s balancing teaching and competing at the highest levels. How can you take Jared’s answers and apply them to your own training or playing? Be sure to let us know in the comments or on Facebook about his methods and mantras! You can check out his profile here.

CoachUp: Hi, Jared! So glad you’re back in the states — could you start off by telling us a little bit about yourself?

Jared Mortensen: My experience with baseball is almost as extensive as it can get. I spent 5 years in college from 2007-2012 as an outfielder and pitcher in both Canada and Louisiana at LSU Shreveport, where we held a 101-21 record while I was playing there. After that, I played baseball for the Grand Prairie Air Hogs in Dallas before getting signed by the Tampa Bay Rays in August of 2013. I’ve been with them ever since and I last finished in AAA-Durham in 2015.

I’ve now played for Team Canada on two separate occasions — once in the Pan Am Games in July of 2015, where we won gold, and then once again in the inaugural Premier 12 Tournament in Taiwan later that year. Most recently, I played in the Dominican Winter League with Escogido and we won the National Championship just last month.

JM: My coaching style is laid back because it’s incredibly important for kids to learn at their own pace. If they get rushed, many of them ultimately shut down. If they learn and craft skills in their own way, young athletes are far more likely to retain everything they’ve been taught and even discover how to correct their mistakes on-the-fly. Confidence is crucial to my lessons — if an athlete does not have confidence, he or she will never grow for the future.

CU: Can you name any little or big wins you’ve had?

JM: Little or big wins with the athletes I train — hm, I haven’t had a bunch of those yet, but I definitely have some favorite ones!  I absolutely love when I play a game with my athletes and they beat me at it. Not only does it mean they’re learning and advancing as an athlete, but it gives them the confidence to say they beat a professional. For somebody that has traveled the world for baseball, it’s fun for them to compete and grow alongside my experiences on and off the field. 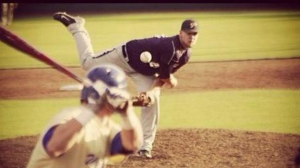 JM: If they go home at the end of a lesson and loved what they did, then that is one of the best gifts I can give an young athlete. Then if they come back the next time even better than before, then there’s no bigger reward. At the end of the day, I realize that these lessons are not about me, they’re about helping and guiding young athletes to be the best they can be. Whether that’s through skill, on the field, or even just being a positive role model, there are many ways that I can impact a young athlete.

CU: What’s the biggest thing sports have taught you?

JM: The biggest lesson I’ve learned as a coach is patience. Yeah, it sounds cliche, but without patience, we will never be able to fully harness our potential as people or athletes. We have to learn that life is not a sprint — it’s a marathon and we need a bunch of little wins to get the big picture completed.

CU: And, finally, what’s the most important piece of advice you can give a young athlete?

JM: The most important advice I can give athletes is to leave everything on the field. Again, I know it sounds simple, but it really isn’t. It’s so easy to not put your full heart and effort in training, but it’s even harder to stay committed at the same time. Ultimately, you don’t want to look back 10-15 years from now and wish you did more.

Do everything you can now.

That’s it from Jared, thank you so much once again for joining us for a quick chat! Jared is one of our more interesting coaches because of his travels during the minor league and postseason months. For now, if you’re in Texas, give him a ring — but, if not, check back in a month or two and see where he’s popped up next.

As for any athletes or coaches in reading this, has Jared’s mantras influenced you to push for your goals? How will you grow as an athlete now? What are you waiting for?

Dynamically Stretching For Softball It’s common knowledge that most athletes don’t properly stretch and warm-up their bodies before their respective games or practices. Of course,

Snowboarding is one of the most exhilarating sports. There are few things more thrilling than speeding down a mountain through fresh powder. Snowboarding is more

The Development of American Youth Soccer

The Development of American Youth Soccer In the international soccer community, Brazil, Germany, France, Italy, Argentina, Spain, and the Netherlands are all soccer economies that