Many sports parents will reluctantly agree that maybe, just maybe, they are guilty of doing things to annoy their athletic children. But the truth is, the annoying doesn’t stop there. Parents do things that annoy coaches too, and after a recent CoachUp post about the ways that sports parents annoy their young athletes, one reader suggested I write a post about the ways that parents annoy coaches.

1. Yelling inappropriately to kids from the sidelines

Negative comments hurled at players do not help. It doesn’t matter if parents are trying to help or just venting. Players hear them, and it distracts them from their game. 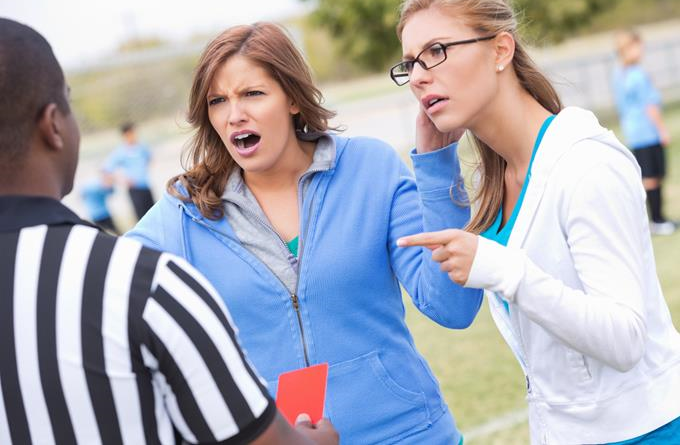 2. Coaching kids during the game, even if it’s done quietly

Dads used to come to the dugout when my husband was coaching high school varsity softball and tell their daughters what to do. What parents do on their own time with their athletes is up to them, but at practices and game time, let the coach do his job without your “help.”

3. Yelling at coaches from the sidelines

This was a pet peeve of mine as a coach’s wife. Don’t you think that the coach–who’s spent hours and hours of his time working with your child’s team–knows how to manage the game and call the plays?

Come on, Coach, pass the ball!! Come on Coach, put Johnny in!! Coach, what are you thinking? That’s terrible play-calling!

There’s nothing worse than armchair coaches who always think they know better than the actual coach. You don’t have to agree with his strategy or philosophy, but yelling from the sidelines does nothing but irritate coaches and their wives.

4. Pulling kids out of practice/games for a week smack dab in the middle of the season

This really bugged my husband. Coaches work with their players and depend on kids to play and practice in certain positions, and it hurts the team rhythm when kids are gone. Family emergencies are obviously an exception, but if you have the ability to, try to work with the team’s schedule. It will not only help your athlete continue his/her development as a player, but will help the team as a whole.

Parents who have problems with a coach should talk to him directly…not other parents, not the administrator.

If that doesn’t resolve an issue, a meeting with the administrator and coach may be needed. But any administrator worth his salary should tell a parent to talk to the coach first anyway.

As I listened to my husband voice his annoyances, I noted that he didn’t say anything about parents confronting him with playing time or position concerns, or any other grievances for that matter. He understands that part of a coach’s job is to communicate with parents and address their concerns. Coaches, what do you think? Are there any other ways that parents annoy you?

bal·ance [bal-uhns] noun 1. an even distribution of weight enabling someone or something to remain upright and steady. 2. a condition in which different elements

Why did you decide to become a private coach? I have always wanted to be a coach. By the age of 10, I was drawing

The Importance Of Staying Hydrated

Water, the most essential liquid of all body fluids, is perhaps second only to oxygen in terms of importance. It comprises 75% of our