What Should You Do If Your Child Has A Teammate With A Violent Temper? 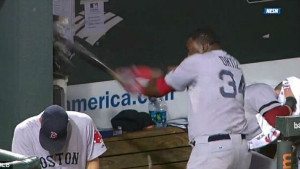 Has your child ever had a teammate with a violent temper? A kid who couldn’t handle failure of any kind. A kid who would come back to the dugout after striking out and smash water coolers with his bat. Throw his glove around. Slam and kick helmets. That kind of violent behavior goes well beyond the boundaries of sportsmanship. It can be downright dangerous for other kids on the team to be around kids like this. A member of the Sports Dad Hub community recently shared a scenario they had to face with their son’s baseball team. I consider myself lucky that I haven’t been in a situation like this…yet. Have you? Her story got me thinking about how I would handle it if a teammate of my son’s had a violent temper that put his teammates in danger. Like most situations in life, there’s more than one way to handle it. So I’d like to open it up to you.

How Would You Handle It?

After you read the scenario described below, share how you would handle it. Have you already been there and done that? If so, how did you deal with it?

Whose Responsibility Is It?

When young athletes behave this way, where does the responsibility lie? Whose job is it to get him under control and set the expectations of how he’s supposed to conduct himself during a game? Is it the parents’ job? Is it the coach’s job?

Here’s the email I received that describes the scenario:

“I’ve seen it twice since my son’s played baseball (5 years). Both times, the kids didn’t have the nasty, pushy “sports parents” that you’d expect (I’ve seen those – scary….) but had the exact opposite – the overindulging “let me make it all better for you” parents. Thankfully, the coaches did not pick him up for travel this season (I truly didn’t think they’d cut him). This kid is a hothead. I first observed this kid throw his bat and helmet when he struck out during all-star tryouts (I’m sorry – if I’d witnessed that as a coach during TRYOUTS, he would have immediately been off the list). He’s had a reputation in rec for a strong arm, but wild pitches. I knew that he was a crier but hadn’t seen it firsthand.

In discussions with the all-star coach (my son’s considered an “A” player for our age group and this coach has consulted us before), my husband and I mentioned the behavior at tryouts but I think they were enamored with his arm and hoping that the behavior would settle down – it didn’t. All summer he consistently threw bats, helmets, cried (and not just a few tears – sobbing crying that carried back out onto the field afterwards). The coaches made it worse by playing him in infield positions that he couldn’t handle. The kid’s really strong but mechanically doesn’t know how to play the infield. He had no inkling of accurate throws, where the play was, etc. Put him in the outfield and he’s great – can throw the ball all the way to catcher from left without much effort. Of course then he pouts about playing outfield (again, a sign of immaturity).

In addition, he seemed to have a distinct problem with my son. My son played shortstop almost non-stop because it’s his strongest position (but I’m not that parent who demands their kid play a certain position – in fact, we’ve always told our son “you play where the coach puts you and you do it with pride”). The coaches considered our son a leader on the team and whenever this other kid would get upset about striking out (which he did 98% of the time because he couldn’t handle the pressure of being up to bat), and my son would try to tell him “it’s okay”, this kid’s response would be “shut up!” He said it to other kids but seemed to really have a thing about my son in particular. His parents would constantly come over to the back of the dugout and talk to him when he was upset. We even had one coach that would literally try to walk him back into the dugout when he was having an episode, calming him down (that really bothered me).

I tried not to talk to the other parents too much about it. At one tournament, he was our 3rd out when he struck out. I watched him walking back into the dugout thinking “here it comes”. The coach put him at 3rd. As he was warming up with the 1st baseman, I watched his anger as he came up to throw the ball back to 1st. This park has particularly low walls (about 4 1/2 feet) for spectators, just past the dugouts. When he threw the ball back to 1st, he was so angry he threw it as hard as he could. Luckily it missed our 1st baseman but came about 1/2 foot from hitting a kid watching the game just past 1st base. If that ball had hit that kid, it would have knocked him out. Our coach didn’t see the throw, but did tell him he’d bench him if he didn’t stop the sobbing. The last straw for me was at the last practice when our coach had the boys scrimmage each other. He let them pick their positions so my son picked 1st (his favorite especially because he never gets to play a different position). This boy came up to bat, knocked it out into center field (never has a problem hitting in practice, just can’t handle the games). Anyway, the center fielder catches it. As this kid is rounding first and realizes he’s out, he pushes my son (who had nothing at all to do with the play and wasn’t in his way or anything). At that point, I had to tell the coach (who, again, didn’t see it although another mom witnessed it and backed me up) that I wasn’t going to let my son play this year (if he made it) on a team if he had to worry about being within arm’s length every time this kid made an error/struck out, etc. I don’t like ultimatums but there comes a point where you have to take a stand.

We had another boy on the team with major attitude issues, but not as serious as this kid’s. I felt like the first kid was escalating, especially when he got physical with my son. I found that my own son’s attitude went down with these kids on the team – it seemed like they were toxic to the well being of the team. I’m glad to see them both gone. My kid is a perfectionist and we are CONSTANTLY telling him all the right things – don’t let it get to you, you’re doing great, etc. etc. He will take the one bad thing he does in a game and let it diminish the 10 great things. And it makes it harder on us as parents to keep his morale up when these other kids are freaking out. This season (travel) the boys have a code of conduct, which I was happy to see. Aside from the fact that it’s never okay to get physical with another teammate, these kids can’t do their best when they’re not gelling as a team off the field. My son got along great with all of the kids except these 2. I have hopes for our team this year – having brought two new players on. But I’ve seen this all over – I’ve even seen an allstar catcher in our area (not from our park) stand up in the middle of a game and say “Stop it Dad!” to his dad/coach when he was throwing a hissy fit about an umpire call… just makes me shake my head. Thanks for indulging me.”

What Do You Think?

Leave your advice and opinions in the comments. Thanks for reading, -Kevin Kevin Duy is a Sports Dad of three boys and writes about sports parenting.

All My Posts
Nutrition

Definition of Sports Supplement: A food, food component, nutrient, or non-food compound that is purposefully ingested in addition to the habitually consumed diet with the aim

Benefits of Wrestling Training While Exhausted

How useful was this post? Click on a star to rate it! Submit Rating Average rating 0 / 5. Vote count: 0 No votes so

The Value of 3-on-3 Basketball