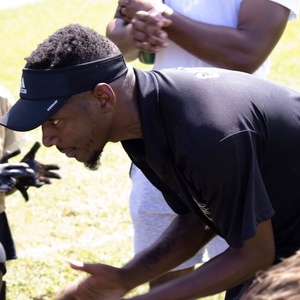 Coach Tyree was amazing. My son loved it. He was very encouraging and gave positive motivation. My son can’t wait for his next session.

Coach Tyree is amazing!!! My son is new to football and started with flag but wants to play tackle next fall. He was very kind and communicated right off the bat what his plan was for my son and what they were going to work on. Watching him coach my son brought a smile to my face. He was so encouraging, correcting his form as they did the drills, hyped him up, and made him feel like a pro! His attention, encouragement, and knowledge of where my son is in his football journey and where he wants him to be was so great. My son talked about how much fun he had with coach Tyree all evening and we look forward to working with him for a long time! Thanks Coach!

The first comment my son made after the initial session was “Mom, that was so much fun!!! When can I go again and how many times a week?” Coach Ty is encouraging, patient, and takes the time to breakdown the fundamentals which is especially important for our 9 year old. We will book additional sessions and know this will help in our son’s development…on and off the field.