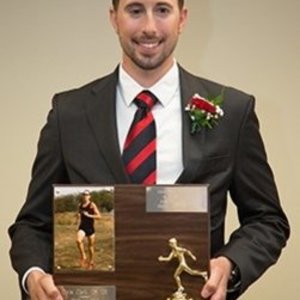 I am a former 5x NCAA All-American and professional Track athlete. I currently coach a HS team and private clients. We build fitness and confidence through effective training. View all coaching experience

1 Group session. Up to 4 athletes.

1 Group session. Up to 4 athletes.

6 group sessions. Up to 4 athletes.

6 group sessions. Up to 4 athletes.

This package is 1 phase (3 weeks) of customized running workouts. We will do a consultation and then I will write a plan to fit your goals based on what you have access to.

This package is 1 phase (3 weeks) of customized running workouts. We will do a consultation and then I will write a plan to fit your goals based on what you have access to.

This package is 1 phase (3 weeks) of customized running/plyometric work and weekly video analysis through Coach's Eye/phone consultation. We will do a consult to begin and then I will send you a plant to fit your needs and... See More

This package is 1 phase (3 weeks) of customized running/plyometric work and weekly video analysis through Coach's Eye/phone consultation. We will do a consult to begin and then I will send you a plant to fit your needs and what you have access to.

I have been coaching Track athletes of all ages and ability levels for over 10 years. I have people I train who are college scholarship athletes all the way to brand new Track athletes. I currently coach distance running, Track, strength training, speed/agility, personal training, a High School XC team, and a High School Track team. I have a Masters Degree in Exercise Science and held a NASM CPT out of college. I have the most experience working with High School, Middle School, and College athletes, but I do coach adults as well. Over the past 7 years I have helped 17 athletes qualify for New Balance High School Nationals, 8 athletes medal at the MPSSAA State Track Championships, 2 XC teams place second in the state, and 8 athletes medal at the MPSSAA State XC Championships. My specialties are sprints, HJ, and distance.

I am a 5-time NCAA D-2 All American in distances from the 3k up to the 10k. I won the PSAC 2008-2009 Sportsmanship of the Year Award for helping pace a competitor to a school record and national qualifying time in our conference championship meet. I was a multiple time D-2 Conference and Regional Champion. I held a top 80 world ranking in the Indoor Track 3000m in 2009. As a college athlete I ran in 2 USA Track and Field Championships. After I graduated, I was able to garner a contract with a Reebok training group in NC called Zap Fitness. I ran professionally for 3 years. During that time, I hit the time qualifying standard for the Olympic Trials in the 10k and Marathon. In 2012 I ran in the Olympic Marathon Trials.

Attention = Intention. Every session begins with a conversation. I walk the client through the plan for the session and get feedback from them to determine if we need to alter the plan. After that, we execute a 5-10 min warm up involving dynamic mobility, neuro-muscular activation, and movement prep. All these are aimed at the movements we will focus on that session. Then we do the most taxing portion of the session depending on the focus that day. After we hit the primary exercises, drills, reps, etc, we will finish the stressful portion with strength worked aimed at injury prevention and improved power output. We always end the session with mobility work and a debriefing. Did we accomplish our goals? How did the client feel throughout the session? What needs to be done between now and the next session? I use training as a tool for the athlete to improve their fitness and abilities as well as to see themselves more clearly.

Coach was detailed and prepared for the workout.

Chris, is very knowledgeable about the technical aspects of running, and has a very good philosophy for training and improvement. I would highly recommend him for anyone that wants to improve all aspects of their running.

My kids love Coach Christopher. We've had several sessions with him, and he's been extremely knowledgeable. He's given them both tips to improve their forms, which they are already applying during their regular practices. He has a strong background in working with youth and young runners, so he knows how to engage with the kids. It is difficult to find a strong distance coach, and Coach Christopher's background gives him the personal experience in both running and coaching that allows him to relate directly to the kids. As a parent, I have been most impressed with the relationship Coach Christopher has built with our club and high school coaches. His goal is to make his sessions with my kids part of an integrated training plan rather than just independent sessions. We highly recommend Coach Christopher, especially for any serious youth or high school runners.

Coach Chris has been awesome so far- very engaged and knowledgeable.

Amazing first session! My son can’t wait for the next one.

Coach Clark has been excellent working with my high school son. He is positive, motivating and knowledgeable. Although the primary focus is running, Coach Clark is educating my son on nutrition/diet and strength training as well. My son has been enjoying the sessions with his coach, and has been much more motivated to train hard for the upcoming season. I am super grateful that Coach Clark is in our local area and has availability to do private coaching!

Coach Clark is extremely knowledgeable in the training aspect but also the relationship aspect of coaching. He understands that each athlete he works with is unique and he takes the time to get to know his athletes as best he can in order to tailor their training to properly fit their needs. This will manifest itself in how he coaches, what he says, and how he pushes you to realize you can achieve more than you thought. He understands the technical necessities of high jump as well as how to train a high jumper how to solidify good habits. One of the most advantageous parts of his coaching is that as he coaches, he also makes his athletes more knowledgeable about their own events so they can further understand his methods and begin to improve themselves. He teaches his athletes why he’s training you the way he is, and how you will improve as a result. I have flourished as an athlete and as a person under Coach Clark. He is genuine in his knowledge and intentional in his coaching. As a freshman in high school, I could high jump 4’8 and couldn’t qualify for the state championships, but by the time I was a senior, I could clear 5’4 and placed second in the state. He guided me towards the motivation, discipline, and grit necessary to achieve my goals and he made me want to do well. He understands that the most important thing a coach can do for an athlete is to be a teacher and a guide towards positive habits and mindsets.

I’ve worked with Coach Clark for 4 years and almost 11 seasons during both indoor and outdoor track seasons as well as during fall conditioning seasons. During this time I learned more about speed training and weight training from him than from any other source. Not only is he extremely knowledgeable in areas such as biomechanics and exercise science, but he’s really good at relating those to track and specific events. He’s a very efficient communicator, and really approachable; all his athletes know that they can ask any questions they have about something he’s teaching. The relationships he builds with his athletes are lasting ones, and they’re built on the communication and trust that is formed during the time we spend training with him. I ran under Coach Clark in high school and I’m currently running in college, but I’m still using what he’s taught me both on and off the track. He took me as a 14 year old, average quality sprinter/hurdler and brought me to a place where, four years later, I’m now one of the top hurdlers in the Pennsylvania State collegiate conference. Over those past years he’s inspired me to work hard even when I don’t feel like it, and to never stop pushing myself until I reach my goals. Without his input and encouragement in my athletic life, I would be nowhere near the type of athlete I am now.

We have had three children coached by coach Clark over the span of 5 years. All three are running in college now and doing well. He has instilled in them a terrific work ethic and drive to succeed. Over the span of years I have known him he has shown many great qualities that you would want from someone coaching your son or daughter. He is humble, not afraid to learn new things and learn from others. He has high expectations, but is reasonable. He knows his stuff – and keeps learning. He has a great rapport with kids, and is a clear communicator. I would highly recommend coach Clark as a personal coach.

Coach Clark was by far my favorite and best coach I have had through my entire sports career. Not only is he extremely knowledgeable about distance, sprints, and field events, but he is also a tremendous leader. He's extremely committed to getting the most out of his athletes, not only within the sport but also outside of it. He also brings the same competitive attitude and mentality to practice every day. He has this energetic aura that rubs off on everyone around him. No matter what's going on in his life, he makes sure he can be a figure his athletes can rely on to stay strong and keep focused. I can genuinely say I've never developed a closer relationship with any coach than I had with coach Clark, and for that I'm extremely grateful. I'm able to take lessons I've learned from his coaching and carry them into my life outside of track.