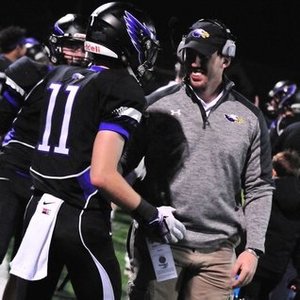 Football coach who has played/coached from the professional and international level. View all coaching experience

Online training can consist of practice and game film to watch and talk about technique, footwork and some mental things the athlete may have missed.

Online training can consist of practice and game film to watch and talk about technique, footwork and some mental things the athlete may have missed.

My background in football has been longstanding, I have participated at the College level (NAIA,NCAA Division 1,Professional) including four years at the high school level(Dublin Jerome, Dublin,Ohio). For the past year and a half I have spent time with the Bloomington Edge(AFL), Alabama Hammers(AFL) and a real brief stint with the Hamilton Tiger Cats(CFL).

My experience with instructing football players has been extensive but I am currently the Head Coach/Defensive Coordinator for the paderborn Dolphins(Germany) in 2019 I was the Defensive Coordinator for the Paderborn Dolphins in 3rd league Germany where we turned the defense into a top 10 defense.Also, 2018 I was the Defensive Coordinator for the Wyszkow Rhinos in Wyszkow, Poland, we turned a team around from 2-6 to 5-3. In 2017, I was the Defensive Line coach at Westland High School(Galloway,Ohio). 2016,I coached Outside linebackers/Safties at Cincinnati Hills Christian Academy, Also in the past I help coach the Defensive line for the Miami(OH) club football team in which we have the nations top defense and lead the nation in sacks. I have worked with three individuals privately the past two of which are defensive lineman and one being a running back; two of which went one to play at the NCAA division 1 level.

A session with me will be tough, football is a game that does not guarantee anything to anyone so working on the fundamentals is a must, depending on the position that player will be playing I would have to break down any film he may have and then put him through a basic fitness test to see where we need to go. It's all about focusing on the little things making the weaknesses strengths and strengthening your strengths.

*Also am a certified High school football coach by the state of Ohio.*

Initial Meeting: I would need a complete background on the athlete I would be training to fully understand the situation. Then we will run through a few drills to know what shape the athlete is in.

*Hopefully between all this I can help coach the athlete mentally which is a seriously undervalued part of training. This will give me a chance to see what areas I can help the athlete.

Nice job working with my 7th grader on the fundamentals of DB and WR.