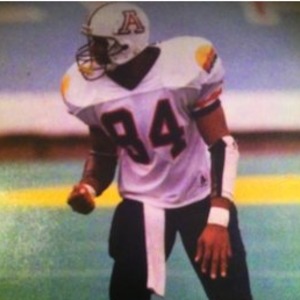 Retired Professional Football Player dedicated to teaching safety and fundamentals to our youth in order to ensure quality play. View all coaching experience

I've had the awesome privilege to have coached all age groups. The average range of age is 12 - 21. In my years as a football coach I've learned there are age appropriate drills designed to maximize safely the abilities of the student athlete. There are also techniques that are complementary to the growth patterns of each child and we focus on those training tools for maximum results. The fundamentals that we believe in are applicable at all levels of competition. This is important because the student will not have to relearn techniques as they graduate levels of play.

I'm a retired professional football player with a passion for kids learning the safe and useful techniques. I got my start playing football in the great state of Texas. I was surrounded by former NFL players both at home and at practice during my early years of development. I attribute my success at each level to those men teaching me first hand knowledge based on trial and error within their own career experiences. 1992 NJCAA #1 WR in the country Coffeyville College, All Pac 10 WR, Fiesta Bowl Champs 1993, Co Pac 10 Champs 1993, Hula Bowl Champions 1993, NFL, CFL, NFL Europe, AFL experience to add to the knowledge of the game. Second generation pro football player. I'm the son of Eldridge Dickey, the first black Quarterback drafted in the first round. I currently have son playing division 1 football at the University of Washington as a WR.

My family and I had the honor of working with Coach Dickey for two seasons 20113 and 2014. Coach Dickey coached every position but primarily receivers and defensive backs. My son George was an average player with little or no focus. My son dreamed about playing college football but never really considered it as a reality. But after two seasons with coach Dickey my son now plays WR at Northern Arizona University. George says they Coach Dickey checks in on him from time to time still. That kind of concern goes far beyond the practice field and we are very thankful for his dedication and commitment.

I had the awesome privilege of coaching Troy Dickey as a young man at the University of Arizona. Coach Dickey was a true student of the game, although he was on offense it was common for Troy to be in defensive and special teams meetings. Despite having a legendary father, Troy was still eager to learn different philosophies from others. Upon completion of his own Pro career It doesn't surprise me that Troy gravited towards coaching. Troy has a genuine heart for training the youth. With safety being a huge point of emphasis, as well as the artistry of the game Troy has found great success in the coaching experience. Continue making the difference Troy. Duane Akina /Stanford Cardinals

Coach Dickey is a class act that teaches safe, sound fundamentals that can be used for an entire life time. Every Drill teaches practical use of position specific techniques to ensure safety, as well as maximizing the full potential of the student athlete. Coach Dickey is filled with information that he doesn't mind sharing and he welcomes dad's to help with the children's training if possible. Coach Dickey only has one rule and that's work hard. Coach Dickey doesn't like bragging but he's coached several College and NFL kids over his 15 years coaching. Coach Dickey will also be coaching with FBU (Football University) Skills camp during the off season.