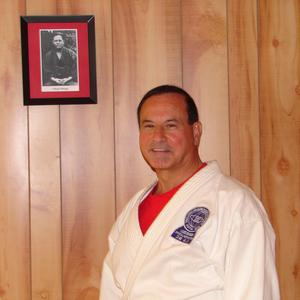 Although I competed in the sports arena, my real interest was always in the practical self-defense aspects. Thus, I began studying Jiu-Jitsu, again under experts, and achieved the rank of second degree black belt in Nihon Jujutsu, and third degree black belt from the United states Judo Association. (Jujitsu division )

Throughout my career, I became deeply involved with Iron hand training (Gung -fu), Internal Chi-Gong study with a Chinese master, Kyusho(Pressure Points), and other expert teachers who showed me many principles and concepts related to martial arts and self-protection. I consider myself a serious practitioner and teacher, who now can utilize the combined martial arts of Karate, Judo, and Ju-Jutsu in a realistic and effective manner.

My purpose now is to train and teach a combined martial arts approach to serious individuals who have the desire to learn the principles, techniques, and benefits.of self-protection.

I look forward to hearing from those persons who share my enthusiasm to learn personal protection.

Attained the title of Renshi ( Bachelor's degree in Martial Arts )

Member of the American Ju-Jitsu Association and U.S. Ju-Jitsu Federation

One on one hands on training teaching all the basic skills necessary for learning and appyling various strikes, throws, joint locking, chokes, and attacking pressure points, to maximize effectiveness and efficiency in a self-defense situation. Small groups of 2-4 serious individuals will be honored for training at reduced rates.

Emphasis is placed on understanding the concepts and principles which allow the applications to be successful. Repetition drills then progress slowly until the student(s) fully grasp the mechanics of the techniques. A progression of adding new applications builds upon the previous techniques allowing for greater competency.

Personal safety is of the utmost importance in every training session. No special attire or equipment is necessary when training.

Coach Tom coached my two teenagers in self defense over the summer. I highly recommend. Him. He was engaging and helped them build on incremental skills in each successive session. He focused on both physical skills but also good common sense thinking and behavior patterns outside the home to avoid risky situations. The children enjoyed the sessions, and I am looking forward to figuring out to continue with some training over the school year.

Great first session! Coach was professional and very helpful in explaining all techniques.

Coach Thomas is a very dedicated and enthusiastic instructor. He takes time to explain the techniques and is always open to questions or comments.