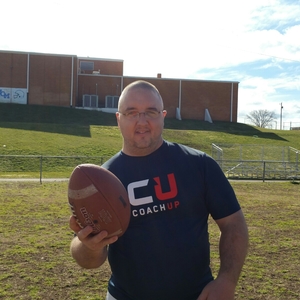 My coaching experience is probably unlike any other coach’s as I started later than some and took a different path than most. I am chasing my childhood dreams to become a high school head coach and then one day coach at the college level. I have coached at the youth level, middle school level, and the semi-professional level as well as served as a student assistant manager/coach at the Division I college level. Private coaching has been a way to fill that coaching void when I have been out of organized coaching. I started about 2 years ago after being medically discharged from the Marine Corps after a very productive career. I picked up my first client not through Coach Up but through Craigslist only because I did not know about Coach Up yet. A father contacted me about his son, who was a sophomore Defensive Back. He had aspirations of going on to college to play football and wanted to start the process of putting in extra work. The mom and dad had faith in me and hired me every Saturday and Sunday during the off season to prepare him for the upcoming season. That season he also became a Wide Receiver and ended the season with 2 INTs and 3 TD catches. I helped him clean up his techniques as a DB and helped increase his agility and speed as well as conditioning. He now is a running back and recently was named to the Dandy Dozen list locally and received a letter from the University of Michigan football program. The rest is history.

My most recent coaching experience came a few weeks ago, when I was invited to coach in the 2016 USA College Football Bowl in Savannah, GA. I served as the Running Backs Coach for the Generals team. This game used to be the D3 All-Star game and then the bowl committee abosrbed the Cactus Bowl and turned the game into this big all-star game. The game is for college seniors from the D1AA, D2,D3, and NAIA to compete one more time and catch the eyes of professional scouts. I currently have clients from Smyrna High School, Fairview High School, Smyrna Middle School, McGavock High School, Overton High School, Eagleville High School, Cookeville High School, Columbia Central High School, Dickson and the Franklin Cowboys Youth Football program. Last summer, I had the distinct pleasure in being hired to come out to West Tennessee to work with Memphis Tiger Football Player. After working with him, he walked on and made the University of Memphis Football Team. I have clients currently who are possible walk ons at the college level located in Shelbyville as well. One is a quarterback and the other is a semi-professional football wide receiver.

As far as other stops in my coaching career the major highlights are as follows:
• Two years served as a student assistant with the Middle Tennessee State University football program. Worked for Art Kaufman the Linebacker Coach my first season on the field and Les Herrin the Defensive Line Coach who had come from the Citadel and was also the Defensive Coordinator for the 1981 Clemson National Champion Football Team
• Coached Linebackers for the upstart Camp Lejeune Bulldogs Semi-Professional Football team at Camp Lejeune. As a member of the Gridiron Developmental Football League out of Memphis, TN, I helped build the foundation of a defense that would facilitate 3 shutouts during the season while allowing a league low average of 8 points per game. The Bulldogs finished 7-3 and made the playoffs in their first season but was eliminated in the first round.
• Coached Linebackers and Assisted with Defensive Line for the defending 2011 Semi-Professional Football BCS National Champion Nashville Storm. Team finished 12-1, won the first ever National Football Association USA League Championship and was defeated by the Racine Raiders in the Semi-Pro Football BCS National Championship game. The Storm finished ranked number 10 in the country. I had the honor of coaching former Columbia Central Standout and ACC-All Freshman Linebacker Fred Sparkman. I also had the pleasure of coaching President Driver, the younger brother of Green Bay Packer great Donald Driver
• Served as the Defensive Coordinator, Linebacker Coach and Running Back Coach for the Harding Academy Generals middle school football team in west Nashville. Successfully transitioned the 6th grade junior varsity and 7th/8th grade varsity teams to a 4-4 defense after being a 50 defense team. The junior varsity team finished 6-2 after losing the first two in a row. The varsity team finished 5-1. Both teams enjoyed multiple games with multiple defensive turnovers
• Head Coach/ Defensive Coordinator/ Linebacker Coach for the Grundy County Junior Jackets Middle School Football Program for the 2013/2014 season. Successfully transitioned team to a 4-4 defensive scheme and enjoyed good success defensively.

The game of football has given me so much, taught me many lessons about life and being a man, and the game itself is special to me. I want nothing more than to share my love and knowledge of the game with football players of all levels from youth to the semi-professional levels. I will work with any position and any age between 7 and 30. I am experienced with speed, agility, position specific techniques and fundamentals and sport specific conditioning. I also possess leadership, mentoring, and teaching skills.

I lettered in varsity football at Columbia Central High School in Columbia, TN in 1994 as a linebacker and fullback. I was a member of the 1994 Lions Bowl Champion Team.

Certification wise, I hold a Level A Certification earned through the Offense-Defense Camp network. I also plan to complete the Performance Enhancement Specialist certification for sports coaches and the TSSAA coaching certifications as well.

With any client, the first thing I want to do is evaluate and assess where the athlete is fundamental, technique, agility and conditioning-wise. From there I will form a program that can be repeated on a daily, weekly or monthly basis that will attempt to strategically and intelligently enhance the athlete's overall development at the desired position in football. Each session would begin with a warmup and stretching, then progress to speed and agility drills, and then onto position specific grass drills. Once these areas have been touched on, we would work on the fundamentals of their respective position and any techniques associated with that particular position. Finally, the session will conclude with football-specific conditioning work with a bit of a military twist. Afterwards, I like to review the day with the athlete, talk about what they feel they did right or wrong then go into expectations for the next session. I also like to discuss and work on developing mental toughness for game day, mental focus, and building confidence in the athlete when it comes to their skills.

My sessions are open to youth ages 7-17 (middle school & high school), former college players looking to make the leap to the Pros, or Semi-Pro/Minor League players looking for a chance at the pros, maybe even a second chance! I am willing to travel within the state of Tennessee, rates are adjusted accordingly.

You don't need a fancy facility to achieve the desired results. You just need a dedicated athlete, coach and a football field. There is nothing better than getting on the field and just going to work. Dedication, Commitment to Excellence, and Hard Work are the key ingredients to success!

Coach Shannon is a great coach! He has helped my child with batting in just one session. Can't wait for our next session! 😄

Coach Shannon is an outstanding teacher. My son is 7 and going into his 3rd year of football. Shannon was very patient with my son and during the assessment. The drills were tailor made just for him and his skill level, and I noticed a difference in him just after an hour. I will be setting up a session plan to roll into the upcoming season and I look forward to working with Coach Shannon for more football training and other sports well into the future. Keep up the great work, you truly do have a gift for working with young athletes.

Coach Shannon is a excellent coach. He was able to see very quickly what needed to be worked on. I see improvements just after first session. We look forward to next visit. I would recommend Coach Shannon.

Coach Shannon is a great coach. He makes you feel like you are getting better by the second, he motivates you to try your best and not to get distracted or discouraged just because you make a mistake, and he works you. He is defiantly the best coach I have had. I would recommend him to anyone, DBs specifically.

Had an awesome time training With coach Potts..it was just an hour but in that hour I gain plenty of meaningful knowledge and I'm looking forward to are next session!

We could not be more pleased with Coach Potts. He is working with our grandson Corbin. He loves the sport of football and only going into his third year of playing football. To help him gain strength, speed, knowledge and confidence, we hired Coach Potts. In a short time we see so many changes going on with Corbin. He is physically getting stronger. He is so dedicated to reaching goals. He is more focused and even doing better with his grades. We give Coach Potts so much credit for these changes. Now that Corbin is in training for his sophomore year of football we look forward to seeing all of his and Coach Potts hard work being put into play. Thank you coach for going above all of our expectations!
Randy & Jackie Hughes

Ashton had a great practice . Coach Shannon did a great job with getting him motivated and back on track . Ashton had knee surgery and was his first day back . Coach Shannon encouraged him through the entire practice. We have been through several combines and camps and the private coaching is far better.

Excellent coach!!!!! Coach Shannon has already made an impression on my son and our family. I can see an improvement in technique after 2 sessions.

I am pleased to be writing this testimonial For Coach Shannon P. Our son has been learning from him for several months now. Not only has he drastically improved in his over all game position but also in agility and knowledge of the game. We have found Coach Potts to not only have a comprehensive understanding of the fundamentals of football, but most importantly he understands how to communicate with his client in a positive and uplifting manner whereby they have fun while learning how to get better at the game. Coach Potts firmly believes in enhancing a players self esteem so they have a positive sport experience to carry with them into adult life. We highly recommend Coach Potts to any parent or player as a valuable resource to guide you through the oftentimes perplexing decisions you may be faced with as you encounter success in sports . Our sons experience with him will help him improve toward his football goals.