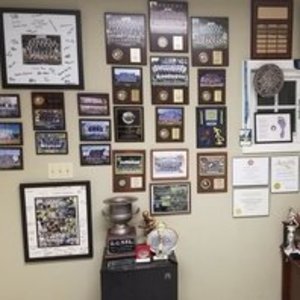 Over 20 years experience coaching and training football through youth and high school levels. I have coached every position in high school at the highest division. View all coaching experience

review basic coverage, formations, personnel for both offense and defense.

review basic coverage, formations, personnel for both offense and defense.

I will focus on footwork, and strength training to allow for each player/athlete to become better all around athlete. I will also focus on the specific details and philosophy for the given sport I am teaching. Review film, create a classroom like atmosphere and practice it on the field as well.

Best trainer you can ask for!!

My 15 year old son had his first training session with Coach Ram. He did a great job with reviewing many aspect of football with him in just one hour, to analyze where he is at. He worked on stretching, conditioning, strength, throwing, and overall player positioning. He gave my son pointers on how to improve his game outside of practice. He was great with time management, had the drills set up and ready to go and helped my son with his footwork and timing.
Overall, we had a great experience and feel very confident with Coach Ram and his ability to help my son improve his game.

Coach Ram was awesome! He is a very knowledgeable and experienced coach. My son has never played tackle football before and he helped my son a ton with regard to the tackle football rules and what to expect in high school football. I would definitely recommend him!

Coach Ram does a good job of adapting to the needs of the player! I would recommend him to anyone!

Coach Ram was great! He did a session with my 9 year old son and he was thorough, effective, and a great teacher! He taught my son the fundamentals of football— we are ready for our next session with Coach Ram! I would highly recommend if your in the Ventura County area.

Coach Ram was great with my 10 year old son. He was very knowledgeable and did a great job teaching his skill set to my son.

Coach Ram was amazing with my son! My son has never played football EVER and Coach Ram was very nice and willing to help and teach my son. We will differently be booking more sessions with him. My son is pretty excited and learned a lot in just the one session. Highly recommend him if your looking for a Trainer.

Coach RAM teaches my son to read coverages and does great physical agility.

Coach Ram is awesome! He made sure my son understood coverage. Other coaches seem to forget the fundamentals and basics that some still may need but not Coach Ram. He starts at the level of the individual needs. My son said he already learned a lot from session one. I am excited my son believes Coach Ram will be able to improve his understanding and overall ability. We can't wait to start his next session!
Thank you!

Great coaching, learned a lot in the hour spent with him, just booked 5 more sessions!

I have done 2 sessions so far for my son with Coach Robert, and I have been extremely impressed with Coach Robert's attention to detail, and knowledge of all the aspects of his training. Everything is explained in detail in terms of how to conduct the workouts, how they benefit him now, and how they translate to the game. I would highly recommend Coach Robert to anyone looking to pursue professional skill development in any aspect of the game of football.

To Whom It May Concern: Robert (Ram) Medina is not only a good friend of mine, but also someone that I have coached with for the past five years at St. Bonaventure High School. Ram is a good man and a strong leader of men. I have observed Ram work with high school aged football players as both a head coach for the Junior Varsity and Freshman teams as well as a position coach for the varsity. During these years Ram has shown outstanding qualities as coach that are more than wins and losses. His rapport with the players has always impressed me, and his ability to relay coaching instructions to his players is top notch. Ram knows how to handle all types of players: the difficult, tough-to-coach players; the novice and high-repetition players; and the all-star players. His ability to coach all of these players on to the same page is exceptional. As a Fillmore resident and graduate, I know Ram will be able to deal with player/parent problems. These situations are getting to be more of the “norm” and I cannot express enough that having some one as a head coach with close-knit ties to the community can be invaluable. Ram has an uncanny ability to remember information and on countless occasions he has adjusted gameplans and calls based on what he remembers from game film. Football coaches constantly need to make adjustments, but many fall short on executing them because they cannot remember what the answer is. This is not true with Ram. A dedicated coach who studies film and the background of opposing coaches, Ram usually finds himself very well prepared and several steps ahead of the opposition. As the head coach of the both the JV and Freshman programs over the years, Ram has also been the offensive and defensive coordinator. His ability to create mismatches as well as constantly change personnel and predictability is tremendous. I have learned quite a bit over the years from Ram on how to create winning situations for teams when there does not seem to be one. He knows how to move the ball around to his players and make sure that his players “buy in” to the plan. As a creative mind, Ram seems to always know when to increase the pace or slow down and lull the opponent to sleep. Again, he works at least two steps ahead of the opposing coach. Coach Medina has proved over the years that he can get the job done correctly. I have watched it happen. I recommend Robert Medina for your head football coaching position. Sincerely, John Muller Athletic Director Saint Bonaventure High School

I am very pleased to submit a letter of recommendation on behalf of Robert Medina. This recommendation comes after knowing Ram for the past five years while he was a member of the Saint Bonaventure HighSchool football staff from 2013-2014.The manner in which Robert’s approached coaching earned him the respect of all the coaches, players and parents involved in Saint Bonaventure High School football community. Robert’s personality, integrity and make up were a perfect fit for our coaching staff. He is extremely intelligent and dedicated to his profession. As a member of the football staff he was bright, energetic, compassionate, ethical, and genuinely well rounded. Robert’s knowledge of the game at the high school level is outstanding; he is a great teacher of the skills of the game. He is a tremendous in game coach and is extremely organized and professional. He is also a great communicator with both the parents and the student-athletes. Coach Robert Medina’s dedication to his work was readily apparent. Because of his leadership abilities/skills, he was frequently requested to take on larger roles within the coaching staff. Coach Medina assisted me with the oversight of the Saint Bonaventure High School’s football offensive game planning. His duties consist of, but are not limited to the following; passing game concepts, play action concepts, play pass concepts, and situational play calls contingent on field position. He monitored and coordinated the handling of personnel packages on the sidelines of the varsity football games. Coach Medina was the event organizer of the annual Saint Bonaventure High School summer youth football camp. He was responsible for advertising and registering the participants of the camp. At a personal level, Robert is a well-disciplined, industrious football coach with a pleasant personality. He is intelligent, mature, and responsible.