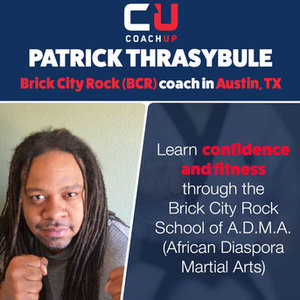 I have experience training fighters for amateur boxing (Assistant at REDBRICK Boxing, Dew Drop boxing Club --Newark N.J. ) and a marital art related to "Jail House Rock".I have great proficiency at guiding students through the difficult landscape of combat arts while providing an environment where students can learn skills safely and effectively. in my class you will be learning a living Martial Art.

My father trained me from a young age (12) to compete in boxing and Defend my self with BCR, I've metaled in the Diamond (Open-gold), Silver (Novice-bronze) and Golden gloves (Open -gold). also I was twice invited to compete in the Olympic Trials. I competed in numerous "Smoker" bouts and often received "fight of the night", honors. (84 -16- 4)

The study of BCR requires that i tailor the training to a students combat experience, fitness goals and mental preparedness. BCR is a striking art and relies heavily on defense, deceptiveness and misdirection to create opening for counters, the average student needs to learn the skills necessary for punching, kicking, head-butting, slipping, smothering, sweeps, throws and arm-bars. none of this can be achieved without tailored guidance on balance, foot-work, and proper control of your mind, will and emotions, we will develop this through drills, games and and sparring.

I begin by building the student from the ground up, explaining how to do something before trying it. the beginning of each class is Cardio followed quickly by drills designed to impart a certain skill set. reenforcement through bag drills, pad-work, martial games and light sparring for the more advanced. classes end with lecture. when that is mastered its off to the next skill set.

Playing Ball.
A game played with a tennis ball.
Used to make the form of straight
punches second nature.

Playing Bones.
A touch boxing game where
player’s score points by
touching the shoulders, hips
and knees of their opponents
with their open hands, also
points can be scored by touching
the knees and feet of their
opponent with their own feet.
Each player will use foot work,
blocks and parries to keep their
opponent from scoring.
The game is played to music
with “rounds” separated by
songs.

Playing Position.
A game where a player will resist
getting pushed by a feeder out of
a predetermined area by adopting
one of four footwork patterns (Sticks,
Stones, Blades and Cups) and their
corresponding arm positions.

The game is played to music
with “rounds” separated by
songs.

Often a card deck is used during a
Round. A card will be thrown out
and the suit of the card will determine
the foot-work pattern used during
the engagement, with the number
of the card indicating how many times
a push will need to be successfully
avoided or blunted before the next card is selected.

Playing Blocks.
After a student is is taught the JHR blocking
techniques on on pads, a game where a feeder
throws strikes at receiver planted on the
wall is played to music. The feeder should not
be throwing at full force as many of the blocks
have de-fanging attribute. The receiver is using
this time to workout the proper timing and
distance for blocking as well as finding offensive
uses for the blocks.

Tire Machete.
the practice of Tire Machete is part of
BCR curriculum as it effectively and
organically reinforces the attributes
learned in “playing position”.
Students will use plastic trainer machete's.

Kalinda Striking.
Tire machete doesn't teach striking with machete.
Therefore Kalinda will be used for that.

Thanks Coach Patrick for all your expertise and coaching advice! I am having a ton of fun, getting in shape, and learning a ton! I look forward to our next sessions!!!

Coach Patrick was awesome! Really knowledgeable and patient with me. Definitely looking forward to my next session! Thank you so much!

I had a great session with Patrick. Coach Patrick does a great job of not only understanding your goals but also taking inventory of your previous knowledge. I was very impressed with his attention to detail from start to finish and care taken into considering future workouts. Would recommend anyone at any level to have a session with Coach Patrick.

I had an Amazing Workout with Coach Patrick at the park across the street from my house.

Coach Patrick has a deep philosophical and partical knowledge of real life martial arts which he teaches in a very common sense and interactive way.

The workout was great and Coach Patrick will keep pushing you to make you give your best.

Coach Patrick is also very patient, a good listener and has a great sense of humor which helps make the class fun.

I felt great after the workout and also learned some new techniques which I have not known before. I will definitely take his class again.

We had the privilege of booking Coach Patrick for our Martial Arts week at our summer camp. Coach Patrick is great with children. Our campers are ages 5 - 9. Coach Patrick implemented an age appropriate lesson plan that was fun, safe, engaging. The kids were excited to show what they'd learned to staff and parents at the end of the day. Coach Patrick was also very professional regarding his communication to students and on site staff. We're definitely booking him again.

EXCELLENT! Very knowledgeable! It’s so hard finding coaches/trainers who know what they’re talking about. I look forward to working with you more. Thank you for everything.

After just a few sessions with Patrick I am seeing great improvements in my balance, cardio abilities, and over all am just feeling lighter on my feet. The laid back nature of his sessions combined with his vast knowledge base make him, in my opinion, a great trainer for anyone of just about any skill level.

If you need to know how to Fight come see this man!!!