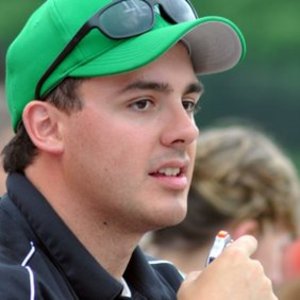 Offering monthly training plans for those without a plan from their coach. 2 time MSTCA Coach of the Year, USATF Level 1 and USTFCCCA Technical Certifications. View all coaching experience

Send me a video of you executing your event. I can take a look at it, let you know what I see, and provide you with video feedback in return. We can discuss what angles you will need to video from for best assistance.

Send me a video of you executing your event. I can take a look at it, let you know what I see, and provide you with video feedback in return. We can discuss what angles you will need to video from for best assistance.

With Covid upon us and Indoor track moved to "Fall 2", I am going to do training plans $50 per month. Included in that is a detailed plan for the week (running work, core work, body strength work, lifting work), as well as... See More

With Covid upon us and Indoor track moved to "Fall 2", I am going to do training plans $50 per month. Included in that is a detailed plan for the week (running work, core work, body strength work, lifting work), as well as accessibility to me whenever you might have questions. My hope from you would be a willingness to keep the plan updated so that I can see what you are accomplishing each day - this allows me to update the plan based on where you are at week to week, while tailoring the plan specifically to you. This is a great option to get you ready for your "Fall 2"/Indoor or Spring track and field seasons.

Entering my 5th year as the girls track and field coach at Westborough High School. In my three seasons at the school, our girls team has broken over 30 different school records. The team has gone a combined 31-1 through the winter and spring seasons while winning the Mid-Wach B League Championship 6 of 7 seasons. Qualified numerous athletes for State Divisional meets, All-State meet, New Englands, and brought a handful of athletes to New Balance Nationals. Have sent a number of athletes to compete at the collegiate level.

In addition to my job with the girls team, I coach the Westborough boys sprinters.

I have served as a Clinician in the sprints group at the Complete Track and Field Clinic at Harvard for six years.

My own athletic achievements are limited in comparison to many of my colleagues. I have, instead, worked hard to obtain knowledge of the sport so that I can analyze things to the best of my ability. While I do have experience competing on my own, I prefer to draw on what I have learned to teach rather than simply relying my own personal successes to my student-athletes.

My philosophy is centered around being explosive - no matter what event you compete in.

Each session is centered around a proper warm-up, assessing current form, and looking to make corrections. The contents of the full session will depend in which spectrum we will be working on. A typical sprinting session would not look the same as a typical throwing session, though some similarities may be found between different event groups. I utilize my iPad to help provide a visual for the athlete rather than just hearing the same instructions they can find in a book.

I do not monitor intense "longer" workouts, but instead work on the tools needed to make these workouts successful.

During the "off" season, I am willing to help develop a training plan to provide direction on training to have athletes ready for their upcoming seasons. I'm always available to answer questions - not just during a session!

Coach Matt is a great coach. My daughter felt totally at ease with him and was amazed at how much knowledge he has for the sport. You can tell that he truly love what he does. She can't wait to incorporate the things she has learned into her workouts and training.

Would 100% recommend Matt. Matt is an excellent coach, my son learned a great deal from him over the fall getting ready for winter and spring track seasons, and can’t wait to see the results. My son would come home from session so excited about even the finest of details Matt was able to help home with. He then was so motivated to apply in practice through the week before the next coaching session.

Very thorough explanations for everything he spoke about. My daughter learned so much in one session and even came home and wrote it all down so she’d remember!

Coach Matt is amazing! He was very engaging with my son. He is extremely knowledgable and knows how to motivate! My son is looking forward more sessions. I would 1000% recommend him.

I have only had one session with matt, but I walked away very impressed with his knowledge, feedback and attention to detail. I left the session feeling more confident about my upcoming race and the prospect of my future in running sprints. I looked forward to working with Matt in the future and would highly recommend him to anyone looking to make improvements in track and field. Jimmy

Our first session with Coach Matt was very productive. He is extremely knowledgeable in all things sprinting, and we saw a noticeable improvement and identified things to work on within just one session. Highly recommended.

Coach Matt works hard at coaching. He cares. He has spent time learning how to coach and now brings a great understanding of technique, especially with sprints and jumps. More importantly to me since my son is younger, Matt is likeable and knows how to effectively get through to kids. My son has a lot of fun in the sessions.

My son is a high school sophomore and had a great first session with Coach Matt today! Coach Matt is very knowledgable and was able to help my son improve his starts and acceleration in just one hour. He is excited to start training with Coach Matt this fall to get ready for the indoor track season.

matt was fantastic....my 15 yr old ran a 5.25 40 down from a 5.4 after 2 sessions w Matt....he had some really good drills to help correct some flaws in their running but also provided a strategy for the approach to specific events and drills....

Coach Matt clearly knows what he is doing. He took my son through a number of important fundamentals including stretches, warm-ups, how to start a race, and maintaining intensity. My son was excited about his session and is looking forward to applying what he learned.

After the first session my son was very excited about the improvement in his technique. I can't wait to see the results in competition.

Matt is truly passionate about coaching. Shortly after we scheduled our daughter's first session, Matt took the time to find video on the internet of Jess competing in the Freshman 100 meter heats at Nationals back in June. Before Jess arrived for her first session, he already knew what she needed to work on. By the end of the first session, Matt had made adjustments to Jess' stride which yielded measurable improvements in her times. Jess says that Matt does a really good job of explaining and demonstrating the changes he wants her to make in technique and that she is learning a great deal from him.

Matt was also candid in his assessment of Jess' abilities and told us that although she has exceptional times for a Freshman girl in the 100 meters, she is actually better suited to run the 400 meters and that she should focus on developing her abilities for that event. Most importantly, Jess says Coach Matt is awesome and that he relates well to his athletes.

Matt is one of the only people who I can confidently say I trust with my training. I met Matt at a running camp 3 years ago and throughout the week he amazed me with his knowledge and love for the sport. Ever since that week I have been in contact with Matt and he has given me running tips and advice for both on and off the track. Matt is more than a coach, he is an amazing person and true friend.

Sometimes you come across a coach who makes you better. Coach Wilson is one of those rare coaches who is able to bring out the best each athlete has to offer. With his guidance and support he is able to help his athletes reach goals they never imagined. For three years I watched him coach athletes of all abilities, he is patient, knowledgeable and always willing to help. He coached my daughter in sprinting and horizontal jumps. He worked tirelessly on her form, her steps, her hand-offs and her strength and conditioning. She had her ups and downs, as every athlete does, and if her results weren't what he expected of her, he worked tirelessly with her to make sure she corrected her errors, perfected her form and got the results he knew she was capable of. He is extremely knowledgeable in sprinting and jumping and is able to translate that knowledge to an athletes performance. He is not only an outstanding coach but is also a great person. He puts an unbelievable amount of work into his coaching, his athletes and the sport of track and field. The evidence of his hard work is seen in the success of each athlete he coached. He has sent many of his high school athletes off to compete in college and he still keeps track of all their collegiate performances, my daughter included. He took a small high school program and turned it into the largest sport in the school, and produced athletes that went to Nationals and won numerous championships. His athletes weren't the only ones to win awards, twice he was named Coach of the Year by his peers, an honor that was well-deserved. More importantly, I feel, is that he truly coached each girl to reach levels they never thought possible. He has always shown genuine concern for his athletes both on and off the field. I know my daughter feels that her success in the sport was due to the coaching she received by Coach Wilson!

I can also speak to his value as a resource from a very personal level, concerning my own son, a discus thrower. During the past spring season, my son, Eric, a senior discus thrower was at a very frustrating sticking point, and myself and other coaches were at a coaching sticking point as well. I asked Matt to come and take a look, and in one afternoon Eric added fifteen feet to his throw. He could pick apart minute details that I couldn’t see and bring yet another athlete, a measure of success.