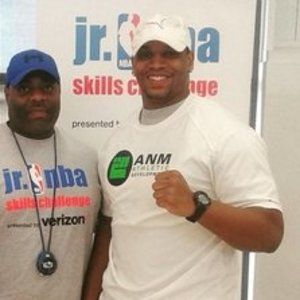 Coach Martin Hyatte here! I look forward to helping you hone your skills and teaching you about Collegiete Recruiting. View all coaching experience

After Graduating from Wartburg College in Waverly IA, (DIII) I started coaching DE/OLB at Marian University Indianapolis (NAIA). My first year at Marian, we were the national runner ups and won the national title the following year.

After leaving Marian, I accepted a position as Head Football Recruiting Coach at NCSA Athletic Recruiting. What I did at NCSA is help high school football athletes get recruited to play football in college.

I have also worked for the Rockford Park District for many years and have found that I love working with younger kids ages 6 and up. I am very much a big kid myself and I am able to let loose and reconnect with my inner child when I am with the younger guys. I enjoy passing the knowledge I have gained over the years to these young individuals.

I started playing football for the Northwest Knights (Rockford, IL) at the age of 8 and have loved it ever since.

I played high school football at Rockford East High school where I was a 4 year varsity starter and two time All conference selection at MLB and FB. After graduating from East in 2010 I was recruited to play Defensive End at Wartburg College (DIII).

I was a 3 year letter winner at Wartburg as well as an all conference selection. We won two conference titles in my time at Wartburg and I was the first African American Team Captain in Wartburg History.

Sessions will be centered around athletes experience and athletic level. We will focus on fundamentals and make weaknesses strengths.

When it comes to speed/agility and conditioning everything will be oriented around time. High volume of movement in a short amount of time. Example: Twenty five 30 yd shuttles, 17 sec's per shuttle, 12 second rest, next rep.

When it comes to position specific drills, we will focus heavily on fundamentals and build a solid platform to learn technique on.

Coach Martin has been very helpful with my son and seems to be improving well . He breaks things down on how he wants things done. Easy to talk to and very helpful in answering your questions.

Coach Martin is amazing. He challenges my son to be better and work harder to achieve his goals. He explains everything and demonstrates until my son perfects the move. I would recommend every football player who wants to stand out from the crowd see Coach Martin!

Great Job with young athlete. Our son is excited to come back each time.

Coach Hyatte was knowledgeable in what my son needed to work in to help improve his football game.

My boys are strong athletes with years of travel football, track, soccer, and other sports under their belts. They got done with one session with Coach Martin and were exhausted (in a positive way). Very glad to be getting this training for them.

Coach Martin is a great coach, very easy to work with. He customized my session to focus on what I needed to work on. I have much more confidence knowing that I am building a solid foundation of basic principles, knowledge, and techniques. I can't wait to get to practice and showed off my new skills. I HIGHLY recommend Coach Martin!

Coach Martin is great to work with. My son is excited to go every week. Coach Martin does a excellent job explaining to my son (11yrs old) on what he needs to work on.

Coach Martin has provided my son with exactly what he needed. My son found out he was going to start as quarterback and safety this year as a ten year old, and was not confident and scared of responsibility. I contacted voach Martin, and he quickly saw him for 2 sessions before his first game. I could not believe how well my son played his first game. He played well as the quarterback for the entire game, and made 4 touchdown saving tackles at the safety position. His team won the first game of the season, and I have to say, coach Martin played a large roll in the victory. My sons confidence alone made a huge difference. Thank you coach!

Coach Martin was great with my son. He really got him excited about football and he can't wait for the next session.

I could not be more pleased with Coach Martin and the work that he has done with my son! Coach Martin is the real deal. In my opinion young athletes that want to take it to the next level or are just beginning this is your guy! I would also like to add that in the beginning we were only planning on doing one session a week after my son attended the first session we knew this was going to be great for him and decided to do one group session and one one-on-one session per week. My son and I would both highly recommend coach Martin not only for his knowledge and experience he's just great people! Thanks coach

Coach Martin is awesome! He is so positive and connects well with my son. We had our first one on one session and my son asked when he gets to go again. I can't wait to see how my son develops his skills with the help of coach Martin!

Coach Hyatte has been a great help, giving me the tools necessary to be a confident athlete. Great for all ages as he is patient and takes time to truly work with you. All around great coach!

Thanks Martin for everything, after two sessions my son is already starting to build his confidence. I'm excited to see the end result! My son is always eager to go to training no matter how hard he has to work.

Coach Martin was a great mentor and leader with the group that my son attended. Stayed positive and pushed the athletes while keeping them focused and having fun! Would strongly recommend Coach Martin and know my son is ready to work out with Coach Martin again.

My son really enjoyed his session with Coach Martin and hopes to work with him again!

My 2 boys just got done with their first session with Coach Martin and let me just say how Awesome the session was! Coach knew just what to work on and what the boys need to work on. We are looking forward to our future sessions and the progression they will make! We would recommend Coach Martin to anyone!

Just saw the email you sent out coach, thank you for everything you've really guided me through all of this and without you I wouldn't have 3 colleges to pick from. Wish you nothing but success!