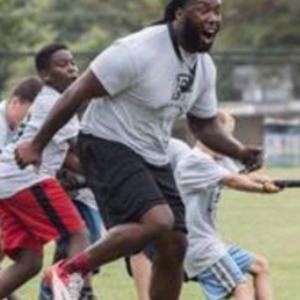 Come work with an experienced Coach and get the Training you need to improve your craft in a Professional, Safe, Learning environment! View all coaching experience

Mactrain Personal Training and Player Development, was created after my retirement from the NFL to continue my passion for fitness and helping others attain healthy lifestyles. It is a program that encompasses a wide variety of training modalities in a circuit and interval style workout; combining indoor/outdoor training with Resistance, Cardio, Speed, Agility, Quickness and Football based training movements suitable for anyone. I enjoy training with creative movements, intense exercises, proprioceptive environments and core dominate workouts moving clients out of their comfort zones; working to strengthen total mind and body.

No matter how small or large your goals, I can help you achieve them in a safe, intense and fun environment.

I attended and played football at Amos P. Godby High School in Tallahassee, Florida and was an All-State performer for the Cougars at offensive center.

I attended and played collegiate football at Hampton University and was a member of the Second Team All-MEAC in 2005 as a Junior and Senior .

New York Jets
McCaskill signed with the New York Jets on July 6, 2009. He was later released.

Second stint with Jets
McCaskill was claimed off waivers by the New York Jets on August 24, 2011.[1] He was waived on September 2

Tampa Bay Storm
McCaskill played the 2013 season with the Tampa Bay Storm of the Arena Football League. He was reassigned by the Storm on December 6, 2013.

Player Development
Our Player Development programs are design to progress athletes of all sports in the areas of Speed, Agility, Quickness, Strength, Power and their Sports IQ in a Private or group setting. We put all of our athletes in a MACTRAIN Designed Performance Analysis Program to check for muscle imbalances, strengths and weaknesses.

1 on 1 Personal Training
The MACTRAIN private sessions guarantee results. It encompasses a wide range of training modalities for any workout level. We focus on improving muscle imbalances, functional movement and nutritional guidance. You will have the privacy of the entire facility during your session.

Offensive Line Specific Training
Formerly of the NFL, during my 6 years I was fortunate to have played under the direction and guidance of a few of the best Offensive Line Coaches in the world. One thing I've learned over the years is that the Great Technique is teachable. The MACTRAIN program breaks down the OL position to its most common factors prepping players to train and play at the most elite levels. All I ask from my players is to T. T. T (Trust The Technique!)

A one-hour high intensity training session geared towards but not limited to: