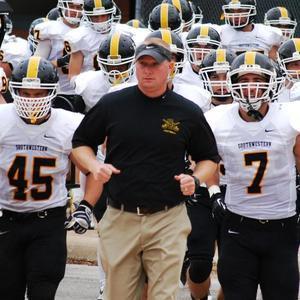 Get expert instruction from a College Head Coach. Coach Austin specializes in Quarterback development, but with over 20 years of collegiate experience he can instruct any position. View all coaching experience

Expert instruction from a College Head Coach is now available. Specializing in Quarterback development for high school and college athletes, Coach Joe Austin has never coached a starting quarterback that hasn’t been all-conference. In 2016 Austin's Southwestern University team were Southern Collegiate Athletic Conference Champions and the coach was named Coach of the Year.

Coach Austin has been the head coach at Southwestern University since 2012. Prior to that, he was the head coach at Hanover College from 2007-2011. Austin served as the offensive coordinator for two schools: University of Dubuque (2005-2007) and Augsburg College (2004). He began his coaching career at Concordia University, St. Paul where he coached from 2000-2003.

Sport Coaches of NCAA Division III teams are permitted to conduct private coaching sessions for athletes defined as “prospects” (start of ninth grade until enrollment in college) as long as certain conditions are met. To protect Coach Austin and his clients, all NCAA requirements are met and renewed annually. Move information available upon request.

Austin was an all-Midstates Football Conference quarterback at St. Ambrose University where he established a new school record for completions in a game. In high school Austin was named all-Central Iowa Metro League where he quarterbacked the only Des Moines Roosevelt High School team to make the state playoffs in the last 30 years.

First session with Coach Joe was amazing. He was patient with my son and elevated the training to incorporate best practices that he can use his entire career. Highly recommended.

Coach Joe was an excellent quarterback coach for my 12 year old son. In just one hour he was able to observe where my son need improvement in his throwing mechanics and teach him drills and techniques to improve. My son is already throwing with more power and accuracy! Coach Joe also sent a summary of the drills so that he can practice them at home. I would definitely recommend Coach Joe and my son looks forward to training with him again.

Coach Joe was great. In our very 1st session he was able to zero in on a few specific mechanical techniques that needed to be adjusted. We implemented them as we went and was throwing quicker and stronger with a smoother motion by the end of the session.

Excellent session, very calm and very good with explanation of drills. Improvement after one hour

My son, who will be in the 8th gr. has played football for 6 years now. He knows the game well, but still indecisive about the position he wants to play. I have been looking for a coach who coaches private football training. After researching Coach Up, Coach Joe was available to coach my son. The Coach was on time, fair about the meeting place, and coached clearly to a 12 yr old. He made sure my son understood the basic skills and worked with him patiently. Coach Joe has a great attitude, he's laid back, and will be a great mentor and coach. We are going to continue with the Coach Up program and continue working with Coach Joe. We did not have any issues 😊

Ive got to say, although my son won the qb job last season, he did so because the offense was primarily a running only with a few passes that didnt go so well.
His mechanica were out of whack and just was not accurate. I tried what I knew last year but he was only hitting the target about 10 % of the time.

Now enters Coach Joe,
On the first session Phillip was throwing accurately. Once Joe viewed his errant techniques, he quickly explained what phil was doing wrong.
I could not be happier. Phillip was now throwing at my hands about 80% of the time.
Phil has a way to go because Joe threw a lot at him, but its definitely working.

If you are looking for a QB coach then Coach Joe is your guy. My son has had 2 sessions and has already worked out all the bad habits. It is amazing to see small changes have such a HUGE impact on speed, velocity and accuracy. There is no comparison to group QB camps & 1x1 training with Coach Joe.