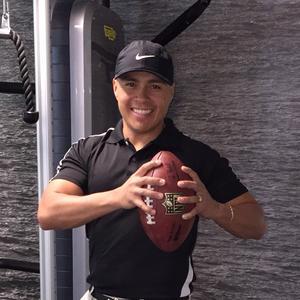 During my 20+ years coaching career I've held various roles as HC, OC, DC and other positional coaching roles, for some very successful football programs at both high school and college level. My experience also extends to other international markets such as Europe, UK and Mexico. In addition, I spent four years supporting the NFL Europe "International Player Development Program".

In addition to my High School and College coaching experience in both Florida and NY, I've led some of the best youth and semi-pro teams in the UK and Europe, such as: Centurions in France, London Warriors (5 years in a row national champions), London Olympians (10+ national champions, 2 European championships). In addition, I coached other highly competitive all-star programs such as Team Europe (sponsored by NFL International), Team England and the Great Britain Lions national football team. I have also led and coached in various other successful football programs in Mexico City.

In addition to my coaching roles, I have also assisted in the coordination and delivery of national and European training camps delivered by the NFL Europe. Most recently assisted the Jacksonville Jaguars London UK Camp.

I primarily focused on young adults (18+), looking to improve their performance during the off season, on he following areas: football fundamentals, athleticism, footwork & handwork, quickness, strengthening, power & core, speed & power-speed, positional skills and techniques to become a sound and better player. I can also help the young athlete have a better understanding of key reads by position in different schemes and football philosophies i.e. spread, triple option, inside/outside zone, defense of coverage and fronts.

I also help players get ready for tryouts, national combine and go through basic metric driven drills needed to stand out as a potential talented prospect.

I've played football as a QB since I was a kid all throughout high school and college, ending playing semi-pro football in Europe. I have coached all positions plus Special Teams, but I focus primarily on Offense.

"My goal is to help the young athlete achieve their dreams and goals in football and make them a better players and successful leaders in the field and society." - I am 100% fluent in English and Spanish + speak other languages.

I have 20 years of playing experience including college and semi-pro in Europe, where I played as QB. In addition I've played other sports and competed in several fitness competitions.

I have experience in coaching Youth, High School, College and professional athletes. My program has helped improve the players performance during the and off season. I can help enhance football fundamentals, athleticism, speed training, footwork & handwork, mechanics, quickness, strengthening and core. I coach all positions, teaching necessary skills and techniques to help them become a better player. I can also help the young athlete have a better understanding of key reads by position in different schemes and football philosophies i.e. spread, triple option, inside/outside zone, defense of coverage and fronts, etc.

Depending on the player needs (after assessment) I can help build a successful program to help him/her improve on those areas of focus. Before engaging into he program, the athlete is presented with a detail recommended schedule, encompassing a series of drills and exercises to help achieve his/her goals.

Coach Franco is very professional and passionate about the game. You can tell he has a lot of experience. He’s coaching my twin sons at QB and WR. Improving their technique exceptionally during each session. He has many interesting drills and even equipment to help with fine tuning their skills. Looking forward to continue working with him.

Great first session just honing the fundamentals. I put the things he taught me right into practice this weekend playing flag football. Great coaching style as well. Excited for the next couple sessions I have left

Coach Franco is truly amazing! He is working with my 9-year old son and he is so positive and enthusiastic, but he also really knows how to teach the fundamentals in order to build the skill and confidence my son needs. We couldn’t be happier and will likely be working with Franco for a long time. I wish I could give him 10 stars!!!

Coach Franco is very experienced , responsive, and personable.
My son is a 19yr old experienced receiver looking to improve for an opportunity in college.
and Coach really pushed him and introduced new drills and workout regimen.
I highly recommend him for athletes of all ages.

Amazing and he will teach you and go at you pace.

He's just great. I always look forward to working with him because it's a new challenge every session. He gives 100% commitment and it motivates me to give much more effort. Can't say enough about him.

Coach Franco is fantastic. It's only been a few sessions with him, but my catching is already improving with the techniques he shows me and the precise drills he sets out to train and sharpen my weakest assets. Definitely recommend 100%. Very friendly, and cannot go wrong with this choice.

Coach Franco is a great coach. I've only had one session with him and I cannot tell you all of the things I learned in just one session. He was exactly on time, prepared for our lesson, and a very positive person to work with. I would recommend him to anyone.

As a French young man, Football was relatively unknown to me…I played Rugby during 10 years and didn’t feel much attraction for Football that I considered not as sophisticated as Rugby but rather brutal. However, out of curiosity I decided to test myself in this sport. Meeting Coach Franco made me change my mind…180°…the trainings and discussions with Coach Franco helped me discover the subtlety of this sport and the elegance of the game. I basically had a crush for this sport and started training not only to be the best of my team but rather to be the best version of me and try to become a pro-player. Coach Franco really made love this game till the point that I now usually spend hours on YouTube watching any kind of tutorials like "How to stick" "How to be faster" "How to win duels" or the 100 tops of the actions. Coach Franco helped me understand this game and changed my approach towards training...while watching Live NFL trainings, I realized that the trainings Coach Franco gave us were quite similar to those of this pro teams…I can only thank Coach Franco for this opportunity given. Coach Franco helped me improved my Football IQ and feeling for the game to drive me to excellence. Early summer, when I joined Coach Franco at the NFL Jacksonville Jaguars Camps in London, he was always demanding more … Unlike a lot of Coach I've known. This has been the icing on the cake! Thanks to the coach everything seem now easy because trainings are the key to success.

Coach Franco is a complete coach. For my first football season it made me progress a lot by taking me under his wing. He knows how to find the best in each player thanks to his football approach with players. Thank you coach!

Coach FRANCO has been hired by the Centurions Nîmes Football Team (French D2 division) for the 2017 season. Coach FRANCO is the more professional coach I've ever worked with. He has an incredible knowledge and background of football. He can coach Offense, Defense and Special Teams, but he's also a great leader and he was a wonderful head coach for the team last season. Coach FRANCO is an 110% invest guaranteed. Coach FRANCO is a hard, hard worker (the hardest I've ever met), who made a tremendous work with video teaching, white board session and every coaching aspect. I will recommend coach FRANCO for every team which is looking for a professional coach. A team who want to become better and better, and a team which is ready to grow up under coach FRANCO's knowledge.

Coach franco is a very complete coach on all positions. On the field and at the gym he is always ready to help a player. He is very knowledgable.

I first remember being coached as a young quarterback when I was 16 years of age at the london warriors youth practice by coach Franco. The coaching style I have taken for granted within the UK at the time as a young player and looking back I can say the quarteback mechanics and footwork drills made me the player I am today. Not only coaching, but player integration and inter-positional competition helped me develop quicker and better quarterback and overall leader. The building and shaping for leadership, execution and determination are the traits I have gained since being coached by Coach Franco. Dayle Greenfield QB Southhampton Solent Thrashers

Coach Franco has had a big impact on me as a football player and in life. I would say his coaching style starts with the importance of fundamentals and technique, both in the throwing motion and footwork. This is something he drilled into me. He also developed my knowledge of the game and as a leader. I put a lot of my life skills that I now use in my career (Personal Trainer) down to Coach Franco and the time he spent coaching me. I now coach Football to younger age groups and find I am using the knowledge Coach Franco installed in me and his drills to develop them. The biggest testimony I can say is that if I can be half the coach that Coach Franco is then I would be happy. Nick Jacquet QB London Warriors