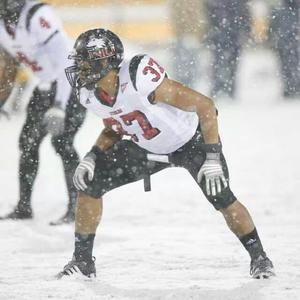 I started playing football in 8th grade and after my first touchdown I knew that this is what I wanted to play in high school. I attended Cary-Grove High school where I was fortunate to have a lot of success. My freshman year in high school I moved up and played sophomore football playing running back and safety. As a sophomore I played at the varsity level at linebacker and fullback. My junior year I was a All-Conference, All-Area safety and we were the state runner up in the 7A Illinois state championship. My senior year in high school I finished the year as a All-Conference, All-Area, All-State safety and running back. I received a full scholarship to play at Northern Illinois University.

At NIU I was redshirted my first year. My redshirt freshman year(my second year) I started my first game at soldier field against Iowa at safety, kick off and kick off return. I was a freshman All-American, and first team All-Mac. finishing the season with 121 tackles 6 pass break ups, 2 forced fumbles, and a fumble recovery. I moved to Linebacker for the next three years starting at both weak and strong side linebacker. Going to three bowl games winning our last in Boise Idaho, also played in the Mac championship.

In 2012-2013 I played several Arena 1 football games this year with the Chicago Rush. At Defensive back and Jack Linebacker

I have a lot of coaching and training experience as I started training athletes and people looking to get in shape as soon as I got done with football in college. I have worked with all athletes boys, girls, men women, and ages from 6-50 years old. When it comes to football I have trained youth athletes, high school athletes, college athletes at all levels, and professional athletes. I specialize in training defensive backs, Linebackers, and running backs. I also train combine and one day college camp athletes. If you need help in perfecting the combine drills I am able to assist you here as well. I also help athletes with speed/agility, performance training, strength training, and pre-hab (exercise to keep athletes healthy and feeling good after a week of hard workouts or a game).

I have trained at 6 different locations and with a lot of very very good trainers. I was fortunes enough to train along side tommy Harris, Matt forte, Nate Vasher, Nate Palmer, Tim Jennings, Devin Hester, Johnny Knox, Chandler Harnish, Scott Wedige, and many other NFL football players. Through my many years of playing, training, and coaching experience I come up with personalized workouts based on age, ability, and personal goals.

1 Hour session for a LB Example:

Linebacker side sprint technique: I will teach the proper side sprint angle and have him do it several times while getting out of a break and catching the ball.

Linebacker bag circuit: go through a series of bag drills that will help you master linebacker movements.

Proper form tackling and tackling in space: I will teach the proper way of tackling and how coaches in the national football league teach tackling today to keep players safe and to avoid penalties. He will go through several drills to help him do this and also tackle in space. The best linebackers in the world can tackle in space.

Ball drills: Today's football game is very pass heavy and a LB needs to be able to succeed in the passing game to be successful. This also means catching the ball when you put your self in position to make plays. So after most of our defensive session or at any position I make the athletes catch a lot of footballs.

There are currently no reviews or testimonials for Alex K.