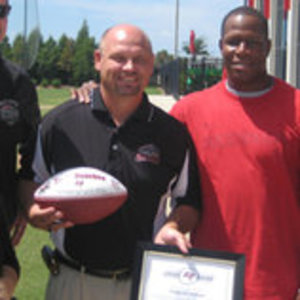 Professionally experienced knowledgeable coach of athletes from youths through collegiate level in football. I focus on specific position needs to elevate your highest potential. View all coaching experience

I have coached youth, high school and collegiate level athletes for over 25 years. I last coached as an assistant football coach at the Collegiate level (Southeastern University) 2 years ago and have been a Head coach (Dunedin, Strawberry Crest, Freedom) and Assistant coach (Largo, Armwood) in High school over the years in Florida.

I played football in youth, high school and college level (LB at University of Cumberlands). As a coach, a few of the awards I have received over the years are 2010 Tampa Bay Buccaneers Coach of the Week, Hillsborough County High School Football All Stars Head Coach, Pinellas County High Schools Football All Stars Assistant Coach, Southeastern University Defensive Line Assistant Coach (2016 Conference Champions).

Clients can expect experienced training specific to their position as I've worked coached all of them over the 25+ years in the sport of football. They will be challenged and motivated with informative and professional training (warm-up period, sport specific training period, cool down period).

Coach Todd does a Great Job. The one on one sessions are perfect for our son also coach takes the time to explain everything well.

Amazing coach!! My son received an immense confidence boost after first session! The coach knows it all and was so informative!! Can’t wait to book next session!! From fitness training to overall knowledge of the game- this coach exceeded our expectations!!

Coach Todd is a great coach, after just 2 sessions my son is more positive and disciplined. He's had several coachs over the years. Coach Todd has a natural coaching ability that really works. Thank you so much, we all look forward to watching him progress more with your coaching.

Todd is a great coach. He has been amazing to my son

We have grown a lot more in to year number two, where as last year it was a lot different having someone come in and change everything completely," senior linebacker Jason Canada said. "From the team meals to even the way we practice on Saturday's...it's definitely a lot more family oriented around here and (we're) a lot closer.

.'' Freedom athletic director Eli Thomas said he received more than 20 applications for the job, including from out of state and three from outside the county. After an eight-member panel conducted several rounds of interviews, Thomas said Donohoe won out not just because he was on staff at the school, but also for other important factors. "Our top candidates were very close. We just thought Todd brought more to the program,'' Thomas said. "'He has a lot of organizational skills and has a passion for what he's doing.'' Donohoe