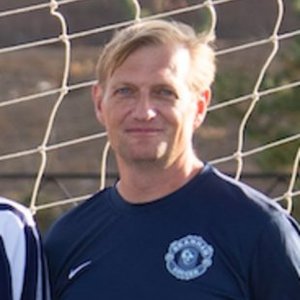 For the serious athlete, with limited resources, I will reduce my rate to $30/hour (do not select this package – instead, contact me and I'll customize a package for you).

For the serious athlete, with limited resources, I will reduce my rate to $30/hour (do not select this package – instead, contact me and I'll customize a package for you).

I hold a USSF "D" license. I've coached youth at the club/comp/travel level for more than 8 years. I coach for Liverpoool FC International Academy - Bay Area (experience includes boys ‘03, ‘05, ‘06 & ‘07). I've been the boys coach for my local middle school for several years and am currently the boys JV coach at Branham High School. I've also coached many adult players throughout the years.

Have personally played for more than 20 years, including on many co-ed and recreational teams, and highly competitive men's teams including the Cosmopolitan Soccer League in NYC - Division 2.

I typically meet with an individual player first to assess their level of technical and tactical skills as well as fitness, discuss their goals in soccer and then create a tailored training plan.

NOTE: If you're an athlete who is serious about improving your soccer game, but you have limited access to resources, I offer a discounted session and/or I can customize something based upon your ability to pay. Feel free to reach out.

The training that my 13-year-old son has been getting from his club during the pandemic has been pretty bad so we wanted to supplement it with private lessons. We found Scott on CoachUp and we could not be happier. He is super responsive and flexible, and he has provided great skills training for my son. My son seems more motivated than ever and he is even practicing his skills every afternoon on his own. I highly recommend Scott!

Coah Scott is really nice, patient and professional. My son really enjoyed the training, and I went ahead to book more sessions.

My son loves training with coach Scott and is always looking forward to the next session! He’s always motivated. Booking for more!

Coach Scott was very helpful and attentive to my son. He is patient and helps by improving his technique by watching for the small things.

My son loved it! He loved it so much I had to book more lessons right away!
Coach Scott is great, gentle, firm, explains very well.

Thanks Coach Scott. Kyler had a good session. Look forward to more...

Scott had excellent drills during our sessions that focused on the areas that I needed help on. After every session I would see improvement at my club practices. He was also one of the few trainers that would email after each session to tell me what to work on during the week. He's been on of my favorite coaches on coachup and hopefully he's open for more sessions during my off-season.

Coach Scott is very organized. He will break down the session into different segments based on the needs of the players.
He will provide both weakness and strengths of the players, and then he goes over on the skills and drills. We found two sessions with coach Scott helpful.

Coach Scott is an excellent coach. My son has really enjoyed training with him. He is very good at breaking down techniques and providing clear instructions along with demonstrating. He has the perfect balance of fun and seriousness. At the end of every session, he provides a recap of what they worked on. Definitely recommend Coach Scott to anyone!

Scott is a great coach, provided me with directly applicable advice to upgrade my skills: passing, receiving, dribbling...He has very useful exercises to practice all those skills. That definitely helped my soccer getting better pretty quick !!

Scott is a great coach, particularly his approach of teaching soccer to kids is very good. In two sessions my daughter was able to pick up basic dribbling and foot work. I am really amazed what proper coaching can do. Thanks Scott for your patient and friendly approach in teaching kids who are new to soccer.

Scott’s coaching is best described as motivational and positive. He emphasized the importance of teamwork and unselfish play. He was able to quickly pull together a group of players that had not played together and build a strong, competitive team. He allows the players autonomy on the field and focuses on teaching during practice and individually with the players on the sidelines.

I had the pleasure of working with Coach Scott while I was Team Manager with a U16 NPL team. Coach Scott was always extremely attentive and caring towards the players, both on and off the field. Working with a very diverse group of players can be challenging, and Coach Scott was great about bringing out everyone's individuals strengths and continuing to hone their areas of improvement. As a team manager, I have always valued the non-technical aspects of a coach, which are critical to support the running of the team. Coach Scott was extremely responsive to my emails and texts, even those sent at very odd hours. He is highly organized, managing the complexities of tournaments and last minute field changes without problems.

My son had Coach Scott for two seasons, 7th grade and 8th grade Fall soccer, and both times were a great experience. Coach Scott is thoughtful, knowledgeable, patient, fair and works very well with the kids. My son says that Coach Scott is a great coach, he is experienced, listens to the kids, plays kids in the right positions, and takes soccer seriously but keeps it fun. We hope he’ll keep coaching soccer at the Willow Glen Middle School so my younger son may have the chance to have him as a coach as well.

Coach Scott is not only a very competent soccer coach, he is a very patient person who looks at each player individually. He is not a 'yelling/shouting' type of coach; he motivates his players through encouragement and meaningful instruction.

Coach Scott was my son's soccer coach during middle school and during his Freshman year in high school. I really like the way he talked to the boys, always striving to motivate as well as engage them on the field. He always works hard to encourage the athletes to believe in themselves, with constructive and positive comments about what they are doing right, rather than wrong. He is a great teacher, mentor, and a flexible and caring person. With the parents, he has always been very professional as well as a really good communicator. You would be lucky to have him!