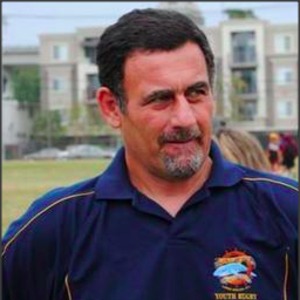 World Rugby certified rugby coach and former Argentinian All-Star. Has been playing and coaching since 1966. View all coaching experience

I have been playing and coaching rugby since 1966 and have been an iRB certified coach since 2007. Also, I'm a Level 300 USA rugby coach. Courses, Rules of the game, Strength and Conditioning, Safe Sport, Concussion Awareness among others.

As a player, I have played for the Cordoba All Star Team in Argentina (Youth and Senior levels), Taborin RC (Cordoba Rugby Club), Lazio Italy, GOB Southern CA and the highlights of my playing career were the First Division Championship in Cordoba (Argentina) in 1981-1986. Also, several youth championships (71-73-74-76) and seven a side rugby tournaments.

As a coach, I coached rugby in Argentina and overseas since 1978 (kids, youth and first division). Actually, I'm a Belmont Shore RFC Youth Coach in Southern California.

BEST RUGBY MOMENTS: First Division Championship in Cordoba 1981-1986 (Argentina) Youth and Senior Province Selections, Cordoba (Argentina) (All Stars) Honors and Awards: Cordoba Province Youth Selection 1975, 1976 - Argentina (All Stars) Cordoba Province Men's Selection 1983,84, 85, 86, 91 - Argentina (All Stars) - Reaching for 3 times in a row the Youth Finals in Southern CA 2010, 2011, 2012. As a veteran of rugby, I have participated in several tournaments with my Argentinean team mates and with the Old Boys of Southern California and coaching them as well.

Rugby is my life and I am looking to share my love for the sport with other players looking to make a difference in their game. My complete sport & coach resume is available upon request.

I started playing rugby in 1966 and have not stopped since then. My coaching activities started at 1978.

My athletic highlights are summarized under my coaching experience, however
If you are interested my full sports resume is available upon request.

I enjoy working with players of all ages and levels but I especially enjoy the challenge of coaching teenagers because with them I can make the biggest difference in their game. My specialties include basic skills as well as teaching the advanced game.

Each person is different, so I focus on improving the areas most lacking in each player. These days, rugby prioritizes the player’s physical aspects instead of their skills. As a result, we have strong players that are unable to resolve difficult situations encountered in the game. Another important aspect is the player’s true understanding of the game. Once this is accomplished the game can truly be enjoyed.

I’m new to rugby and had a great first lesson with Coach Pablo. He is very knowledgeable and took his time to explain to me the fundamentals of the game. Looking forward to future lessons.

Coach Pablo was incredibly helpful and very knowledgeable about the sport. He understands where you need improvement and adjusts the session to help you become a better player. I would recommend him to anyone who is looking to improve their game

I just had my first session with Coach Pablo and it was very informative! I am a complete beginner and didn't know all the technical details about rugby but he was patient and gave me great advice that I could use to improve my game. Coach Pablo trains in a way that does not overload you with information but breaks it down to make you understand better! I am looking forward to the next session as he is full of great information to improve your rugby game.

Pablo is an amazgin coach , I highly recommand his services, he's very experimented and friendly .
He will help anyone new or more advanced to develop his skills.
I can't wait to reschedule a new session .
I'm so happy with my choice .

A great coach knows a lot about the game. And a lot of fun drills.

Thanks Pablo for all your help, you're great

Hi Pablo, thank you for all the support with the forwards and backs

Pablo, thank you for a great season

Pablo, thank you for helping out this season

Pablo, thank you for all your help

Pablo, thank you for the best first year of rugby

Pablo, thank you for all the advice

Thank you for one of our best seasons

Pablo, thank you for all the backs, help!

Pablo, thank you for helping me as a fullback

Thanks for being a great coach

Pablo, you taught me a lot and I have a lot of respect for you

Thanks for helping us, and for this great season

Pablo, thanks for the help you gave us this year

Pablo, thank you very much for the all times you came out and made us better