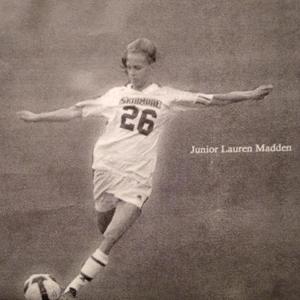 I have been playing soccer since the age of 5. I played at the collegiate level for four years at Skidmore College and at the graduate school level at the University of Southern California. My name was placed in the National Soccer Hall of Fame in Oneonta, NY after my freshman season at Skidmore. I was a dual-sport athlete at Skidmore (soccer and lacrosse) and have given both private and group soccer lessons for the past 10 years.

We begin with a warm up and some dynamic stretching. I ask each player if there is anything in particular they'd like to work on so we effectively manage our time. Then we work on agility, passing, 1v1s, and shooting. Finally, we finish with a cool down and a stretch.

My daughter loved her session and is looking forward to her next one.

She was great with our kids!!

Coach Lauren was great with training and keeping engaged.

She worked really well with my 7 year old daughter.

Great first lesson. My daughter wants to go back which she hasn’t with the last 3 coaches I’ve found.

Coach Lauren is excellent! She works very well with my 10 year old daughter. My daughter learned a lot from their first session, and she also had lots of fun. I highly recommend Coach Lauren.

Kids had so much fun!! Highly recommend!!