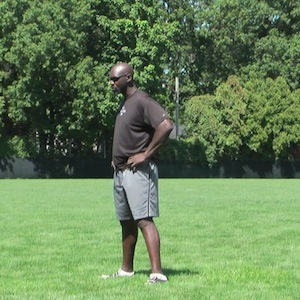 I have over 20 years of coaching experience in track and field, specializing in all of the field events except pole vault. I started as a sprinter/hurdler/horizontal jumper in high school and learned the throwing events in college. I still compete in the throwing events today.

I hold USATF Level I and II Certification, specializing in throws, jumps and combined events. I am an NSCA Certified Strength and Conditioning Specialist and a USA Weightlifting Sports Performance Coach.

I am presently the director of cross country and track & field at a Division III University. I design, coordinate and implement training for throwers, jumpers and combined event athletes. I also assist with training of sprinters, hurdlers, middle distance and distance runners. In addition to my track duties, I create, implement, and monitor weight training for all track and field and cross country athletes. During my time, athletes have won the following accolades:

I have previously been an assistant at Ohio University and Lynchburg College. At Ohio University, I designed and implemented training for long and triple jump, discus and javelin and assisted with training of hurdlers, high jumpers, shot putters, and hammer throwers. My athletes achieved the following:

At Lynchburg, I assisted with the field events, and also helped to get the weight throw and hammer events reinstated in our conference championship meet. Athletes I coached won the following:

In addition to my collegiate coaching experiences, I also worked as a Minor League Strength and Conditioning Coach with the Chicago Cubs and the Pittsburg Pirates.

I am still an active track and field athlete and have competed in events post-collegiately since 1997. I've competed in several master's national championships as well as the inaugural State Games of America competition.

A typical training session will include a general warmup, followed by a drill progression and specific-skill work. Sessions can also include general and/or specific strength training.

Patient and positive. Very knowledgeable. Look forward to working with him more.

Coach Kunle is a great coach for my high school track student. His focus is on the best the athlete can give and how natural the movements can be. I highly recommend him to anyone who wants to excel in track and field.

My sons session with Coach Kunle was great. Coach Kunle is very professional and is prepared. He had training aids and provided detailed instruction to assist my son with improving his running posture and speed. Looking for to many more sessions and improved running performance.

Coach Kunle is a great coach who spends time ensuring that the basics are done properly. He has a wealth of knowledge and my daughter enjoyed her first session and is looking forward to the next workout. Take care of the little things is something my daughter took away from her workout and how doing so will help her overall on the lacrosse field. We would highly recommend Coach Kunle!

Coach Lawson is great with my 16 year old in showing her the techniques needed to improve her jumping abilities. He has provided her with an array of drills and knowledge throughout our sessions with him to accomplish this.

Coach has expertise and experience not found easily. We are fortunate to have training sessions with him.

Coach Kunle was exceptional. I highly recommend him.

After the first session, my son feels this is the coach he can work with. He felt very comfortable with Coach Kunle instructions. We WILL be booking more session with Coach Kunle!!!!!

Coach Kunle was wonderful!! This was my athlete's first high jump session and Coach Kunle was very knowledgeable and patient with teaching him the proper jumping technique. I would highly recommend him to anyone!!!

Coach Kunle was thorough. He directed my daughter. He was professional and helpful. My daughter's confidence was boosted with one session. I would HIGHLY RECOMMEND him.

I purchased three sessions with Coach Kunle to help my son, Zahn, with shot put and discus after he qualifies for the Regional Meet. I couldn't have been more pleased with the results! Coach Kunle is a true coaching talent and was very knowledgeable on what it would take to improve my son's throwing ability. He was kind and very encouraging. Coach took his time and showed my son different throwing techniques and exercises. My Zahn's throwing distance with the discus improved by 30'! Although, my son was injured two days before going to Regionals and would have qualified for Junior Olympics, I remain positive and optimistic for next year because I most definitely will book Coach Kunle as Zahn's throwing coach for next year!

Great first session with Coach Kunle. He quickly identified things my daughter needed to work on in high jump and is breaking them down so she can improve.

He was AMAZING!! He really helped me by breaking down the spin into individual drills and movments. It's much clear now how the spin is supposed to go and I find it is easier to tackle.

Coach Lawson is awesome. His teaching abilities and technical expertise are worth every penny. We are using him for coaching in the long and triple jump and couldn't be happier.