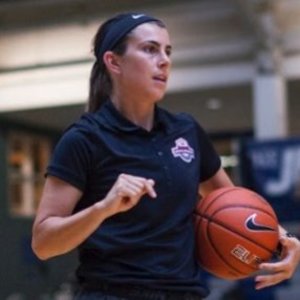 I help basketball players and teams reach the next level with my personalized training programs. Sign up for one of my packages and take your game to new heights. View all coaching experience

You have a choice to attack everyday. I encourage my players to have an attack mentality whether it is learning basic footwork or approaching a complicated drill. I do this with an optimistic and enthusiastic approach because it is part of my DNA.

During sessions, I teach my players how to have "textbook" fundamentals. You won’t see me teaching fancy moves or trick shots because I believe in quality basketball skills. Sessions will be intense and deliberate with a concentration of skill and player development. I feel that it is important for all of my players to become complete basketball players and people.

Coach Jaclyn did a great job training my 12 year old daughter and will be signing up for weekly classes.

Extremely happy with Coach Jaclyn, my daughter is definitely going to continue training with her.

My daughter’s first season with Coach Jaclyn was great! My daughter felt challenged and learned a few new moves already! She is looking forward to her next session!

Jackie is a very good, detailed teacher of the game, my daughter enjoys the workouts.

We just had our first session with Jaclyn and it went great. My daughter liked her and she got a great workout. She’s looking forward to next week.

Jackie has done a great job with my daughter over multiple sessions. The drills are very well thought-out and geared specifically to my daughter’s skill level and strengths/weaknesses. Jackie brings a combination of intensity and positive reinforcement to the sessions that is perfect for my daughter. She looks forward to more sessions with Jackie in the future!

My daughter has been working with Jaclyn for several weeks now and we couldn't be happier with her. I noticed a difference in her game immediately. Jaclyn zeroes right in on what she needs to work on, and gives her drills that are challenging, but fun and gets the most out the time they have together.

Great session with Coach Jaclyn. She customized the session based on my needs and got right into several drills designed to address areas of improvement. Great at demonstrating and explaining how to apply in game situation.
Booked 5 more sessions right away.

My daughter really enjoyed her first session with Coach Jaclyn. She worked on the specific areas that we asked her to work on with my daughter. Furthermore, Coach Jaclyn brought a lot of energy to the session and some new drills that my daughter hadn't done before. Looking forward to session 2 for sure!

Jaclyn was great with my son. Clearly very knowledgeable about the game and got right to work on the fundamentals, which is what me/my son we’re looking forward to. You could see how my son got better throughout the course of the first session. He looks forward to working with Jaclyn again.

Coach Jackie is great!!! My daughter loves her sessions and has gotten so much out of them!!! Jackie is top notch. My daughter’s confidence and skills have improved tremendously. Looking forward to more sessions!!

Coach Jackie is truly the best there is - you really don't need to keep looking. Her technical knowledge is top notch, and she is able to teach in a way that leads to tangible results and important improvements. My daughter (going into 9th grade) feels that she has definitely gotten better through meeting with Jackie, and she looks forward to every session. It is clear that training is highly individualized with regard to both what my daughter wants to work on and what Coach Jackie knows are the specific skills and improvements she needs to get to the next level. Coach Jackie also communicates well and quickly which makes things easy.

Jaclyn is a great fit for my son, she works him hard and gets the most from him, my son was very impressed with her after his 1st session and is looking forward to the next.

Hailey had a great first session. We are looking forward to continuing!

My 11 year old daughter had an hour session with Coach Jackie and it was really great. Coach Jackie went back to basics and worked her hard on her techniques, ball skills and the fundamentals that kids often forget they have to learn in order to improve. It was a well spent hour and my daughter had a great time. I have no hesitation in recommending Coach Jackie and we will be booking more sessions with her.

Coach Jaclyn is awesome! Great working with kids. After one session my daughter’s confidence improved. We are looking forward to future sessions!

Jaclyn great ! She really teaching Peyton the game of basketball and the right way to play, if her services are still available in the years to come Jaclyn will be the go to trainer.
Thank you

10 minutes in I could tell Coach Jaclyn was different from all the other coaches my daughter has had. Her knowledge of the game and especially the little things was on display from the start. My daughter really enjoyed her lesson and I could already see the confidence sparking. I only wish I found her earlier.

It’s a no brainer we will continue with Coach Jaclyn as my daughter gets ready for high school in the Fall.

My son enjoyed his first session with Coach Jaclyn. He said that she was patient, knowledgeable and made him feel comfortable.

Great Coach, she pushes her clients to their limits, and meets your very specific needs. I️ highly recommend you guys check her out

Coach Jaclyn was a great coach. I had a great first session with coach Jaclyn. We only had an hour session and I learned so much about my game. She pointed out my strengths and things I had to work on. I will be continuing with coach Jaclyn.

Coach Jaclyn has done an outstanding job working with my daughter. Her ability to communicate and teach my daughter the skills to be successful on the court has increased her level of play.

My daughter looks forward to each training session. She works on her own between sessions trying to improve on the skills that coach Jaclyn has taught her.

Coach Jaclyn's ability to connect with my daughter has motivated her to work hard and increased her confidence. Its been a successful summer season and we look forward to continue working with Coach Jaclyn.

My 10 year old grandson spent this past week with Coach Jaclyn and thoroughly enjoyed it. It was his first one on one coaching experience and he was nervous about it...within 10 minutes of the first session I could see that Coach Jaclyn had him fully engaged. Her sessions were very organized and she flowed seamlessly from one drill to another. Theo feels like he really worked hard all week and came away a better basketball player for it. Coach Jaclyn was a perfect fit for Theo, she challenged him, encouraged him and provided a positive environment for a young player eager to learn.

My daughter had a great first session with coach Jaclyn. Jaclyn provided a complete summery of her assessment of my daughter's strengths and areas that she should work on. We are looking forward to working with coach Jaclyn again in the very near future.

First session was excellent. As a first time user of Coach Up I came into it with a little bit of concern around the quality of the Coaching and how beneficial the training would be. After one session there's no doubt in my mind that Coach Jaclyn will push my daughters to reach her full potential while helping to build her confidence. Very much looking forward to see the progress by end of summer.

Jackie has trained both my son and daughter and I have seen impressive results in both of their games. Jackie has a unique ability to relate to the players and instill confidence in them. Each training session she comes prepared and full of energy which is contagious with the kids. I have seen huge improvements in the shooting and ball handling abilities of my kids. More importantly I have seen an increase in their confidence which not only helps in basketball but in life in general. I would highly recommend Jackie!

Coach Lyons has meant the world to my daughter Madison. Jackie took a clinical view of my daughter's mechanics, broke them down and rebuilt her shot with great mechanics. However, more important to me, was the confidence she instilled in my daughter, the positive reinforcement and the commitment to truly help her accomplish her goals.

About three years ago, my daughter was entering 5th grade and enjoyed playing intramural basketball in town with her friends. She displayed a strong interest in youth basketball along with a bit of talent. So we started looking for opportunities for extra skill sessions to complement her new AAU team that she joined. Through her high school varsity coach, who gave glowing recommendations, we learned about Jackie. We then contacted Jackie to set up some skill sessions. After our initial phone conversation, we were confident that this would be a good opportunity for our daughter. We were right. Jackie is truly amazing! Jackie’s passion for the sport was immediately obvious and her commitment to her girls was and is still unwavering. She not only trains our girls during regular skill sessions, but also makes herself available for extra sessions if anyone is interested. Occasionally, she even came to watch these girls play on their summer league team even though she had no affiliation with any particular team. During one of those games she came to watch, I asked her why she gives so much to these girls and she said, because when she was their age, she had a coach who dedicated himself to her and her teammates, helping her reach her fullest potential, and she simply wanted to do the same thing. We knew we found a special person and three years later, she still displays the same warm, friendly, positive attitude that was evident the day we met her. My daughter loves playing for Jackie and gives everything she has during practices and games. As parents, that’s all we can ask for.