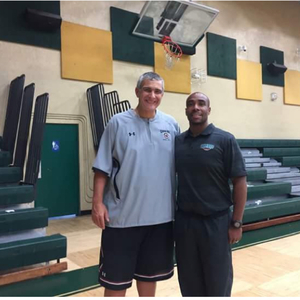 With over 20 years of experience, I will further develop an athletes skill to play at the next level, weather it's high school, college or professional. Coach of the year 2018/19. View all coaching experience

I have 20 total years of experience, 18 of the 20 years have been coaching high school boys basketball with 2 years coaching girls varsity. I've had the influence of over 30 college players as I trained and prepared them to play at the next level. With a certification In Sports Psychology allows me to meet the athlete from a mental aspect in order to achieve the most production physically. Lastly, I've stood on the fact that I get the most out of my players, some of them have come back to coach, while others have played college and/or oversees.

With accomplishments as a player and coach consists of starting all four years playing varsity point guard at Detroit Central High School. I'm honored to say I made second team all state two years in a row, first team as a senior. Following my high school career I went on to play 2 years at Schoolcraft College In Detroit. I decided to coach at the age of 20 during my second year of college. I received a total of 4 coach of the year awards, membership into 200 varsity win club (MHSAA) one state championship appearance, 3 league championships, 4 district championships, 1 regional championship. 3 of my former assistants have move on to become head varsity coaches.

Our initial training session will consist of a full evaluation of ball handling, shooting, footwork, strength and conditioning. Based on your evaluation we will begin to work on what I feel you need to improve. Starting with conditioning you would do a series of sprints, footwork drills, push ups. following conditioning you will begin to work on form shooting to master proper form while shooting this is done at every session, followed by a 8 series ball handling workout. depending on what position your training for we would train specifically in that area most of the time. (example) guard work would be extreme ball handling, defensive footwork, shooting, recognizing defenses etc. power forwards, centers would direct they're attention towards post defense, help, deny, 3/4 front, full front etc. Post offense drop step, Mikan Drill, up & under, turn and face 10-12ft jump shots. All positions will work on free throws, rebounding techniques, defensive positioning and a host of other things.

Coach Griffin is an amazing trainer especially for people who have been out of the game for a bit. He will push you to your limit and sometimes it will be a limit you didn’t know you had. Just one session so far but I definitely know I’m in good hands and on a good path!

Dion did a great job, he was very positive and showed good patience. I would definitely recommend his services.

I don't give many reviews, however after Coach Griffin trained my two sons I must recommend him for anyone who wants to get high level teaching. He worked my sons so hard I started to feel bad for them until I saw the results for myself. As a mother I would never been able to get them to work this hard. Please keep changing lives on player at a time.

I was very happy with Coach Griffin's approach to coaching my son he was 75 pounds over weight he spent one month doing 6 days a week training he lost 25lbs and has gotten so much better. I am so amazed at how coach Griffin change my sons life not just basketball. God Bless you and I'll need you to start back training Zack in April. Thanks to you as well Coachup!

After only 5 sessions with coach Griffin my daughter has went from barley playing for her high school team to starting and even scoring in games. Her high school coach has even ask what has she been doing to improve, I mentioned coach Griffin and he was very impressed. Thanks coach see you after the season.

I hired Coach Griffin as my assistant varsity coach. I had no idea he was as experienced as he was even though his resume is incredible It's his ability to motivate and his attention to details that really separate him from most.coaches. He knows this game very well. In my 32 years of coaching, I can feel good about turning the game over to coaches like coach Griffin. Keep up the good work coach.