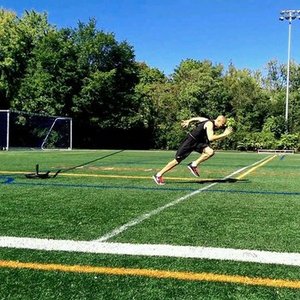 I have 20 years of personal training experience helping clients achieve their health and fitness goals with precise program design and nutritional coaching. View all coaching experience

I've been a personal trainer and athletic performance coach for 12 years now. I am truly passionate and committed to helping athletes improve their strength, speed, power and conditioning to make them excel at their sport.

With every session I include a dynamic warm up, injury prevention and core. We then go into our strength or speed and agility. Sessions are finished with a cool down that includes stretching and foam rolling.

What separates my sessions from others is my program design and attention to detail. I just don't do exercises and drills for the sake of doing them, everything has a purpose. I believe in being efficient and not wasting time or energy.

My 16 year old daughter trained with Damien for track and field. Scheduling and communicating with Damien was very easy. At the end of each session Damien was able to give me feedback on my daughters progress. He has helped me with ideas for healing her leg pain and provided my daughter with a guide on food to eat while training and in competition. We are very happy with my daughters overall progress. We plan to continue with booking sessions with Damien.

Coach Damien is exactly what my son needed. A coach that will not only challenge my son physically but mentally. He challenges my son to think and to understand the mechanics required to be the best athletic 'you'.
Highly recommended.

Coach Damien is awesome! His knowledge and insight into biomechanics is strong and his ability to use that knowledge and apply it to the needs of the individual is equally as strong. Look forward to continuing to get coaching

Coach Damien's training sessions are top notch. In two sessions my son has developed a better running form which he lacked previously. Coach Damien's attention to detail and focus on form is exactly what is needed in a one on one coach. He provides the level of detail that a high school coach cannot. I truly believe my son has benefitted from these sessions and I'm sure the results will be seen during track season.

Had a great session with Coach Damien. We worked on starting techniques and I already feel the difference. I look forward to working with him again.

Greatest coach I've ever had for sure!

Coach Damien was very patient and knowledgeable. He listened carefully and then provided expert advise and coaching. Coach Damien demonstrated each skill he was teaching and then worked with me until I had it right. He was also very fun to talk to and for me it was time very well spent!

Damien is an excellent coach and trainer. The Morris County Track Club is seeking to increase its sessions and expand as a club with Damien as a Coach, Trainer and consultant.

Now that we are winding down our indoor training with you. I would like to tell you that the players have really bought into your program. The hard work and connection you have had with boy's has shown in the results of both the Ramapo Rangers and The Franklin Lakes Rangers. The first step quickness and explosive starts have resulted in a real improvement in our defense and base running for both teams. We have had many games where we stole more than 8 bases and they have posted 5 shutouts with some great defense which I attribute to the quickness developed in your program. We look forward to starting up again after the fall season.

For what it's worth Damien, your training meant all the difference. You truly made Anthony a better athlete. Here, he catches the runner by himself eventually, by overtaking him with he 45-degree running angle you instilled upon him. You also took his 60-yard dash speed from 7.8 secs when he first game to you to 6.8 secs. 1-1/2 years later. This year, he was 1st Team All-County, Hudson County, and he led the team in hitting, overall hits, on-base-percentage, runs scored, rbi's and stolen bases. He led the team in virtually every offensive category there is, including doubles and triples, and you should be proud to know that you shared a major and significant role in his athletic development. I can't wait for you to get your hands on his younger brother Frankie, now 14-years old. Thank you for everything.