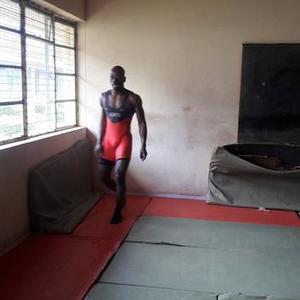 Well begun is half done. View all coaching experience

Message Coach
Fast Response Rate:
The percentage of time Ibrahim-Checkron A. responded to client inquiries within 48 hours in the last 3 months.
100%
Training Locations

I have been working with athletes for ten years from the youth to the master's level: early on I coached youth athletes in Iowa through our youth wrestling feeder program; I've also coached and developed athletes on the youth, senior, and masters level in Athletics (track & field), Amateur wrestling (folkstyle - in Iowa, Texas, & California) as well as the Olympic wrestling styles: (freestyle & greco-roman) in North America and East Africa.

I've worked with athletes on all levels: those aiming to improve their fitness, those seeking to pass standard or elite level fitness tests, competitive athletes, as well as a few athletes who were training for the US Olympic Trials, Kenyan National Teams, and Ugandan National teams at the junior, senior and masters Level.

In the USA I've been the Volunteer Assistant/and Assistant Coach in Central Texas for several programs (for Wrestling since 2015; for Track & Field since 2018): The University of Texas-Austin, Huston-Tillotson University (HBCU); as well as St. Dominic Savio Catholic High School & Leander Spartans Track Club.

In Iowa at The University of Iowa, I improved my technical knowledge in the Olympic wrestling styles prior to making my national team (2016.) In California, as both an athlete and coach, I improved my freestyle and folkstyle wrestling acumen at Poway Regional Training Center in Poway, California (2019.)

In East Africa I've worked (since 2016) helping with clubs and programs at the local, regional and national levels in many capacities (as an assistant coach, in capacity building, and in operations.)

I work alongside my colleagues to prepare our athletes to better understand the principles that govern our sport and the conditioning and time-management required to be a competitive student athlete.

I take a cross-disciplinary approach to put my mind and body in the best position to compete in whatever areas I apply myself. ..

My long term goal is to consistently represent my country as a multi-sport athlete in championship level competitions and periodize** my training to do so.. .

Finally, it's my desire to participate in the development of athletic education by providing a comprehensive yet advanced level of instruction for youth-level and developmental athletes specifically - which is why I started #StrongYetFast (Search the Hashtag.)

Sessions are coordinated for the individual athlete (even if there are group sessions.) They are high quality sports specific sessions based on the athlete's fitness level, training age, short and long term goals, and finally each session is specific to the phase of the season the athlete is in [ Developmental, Early Season, Competition Phase (Early | Middle | Late), Post-Season.]

To prepare the athlete to reach their goals (whether they are a developmental or elite) a test of balance, coordination, speed, endurance, flexibility, stamina, and overall athletic ability and skill are performed (whether the athlete is a sprinter, sports specific athlete, or endurance athlete.)

Coach Check was amazing. He was very attentive and detailed. He pushed me and my body to accomplish things I never knew I could in a very short period of time. I would definitely recommend Coach Check.

Coach Check is great, knowledgeable and takes the time to explain the technique in a way my son can understand. Highly recommend!

My Son is very excited and happy to train with him. he is very knowledgeable and communicative and he makes my son better.

Coach Checkron is a very high quality coach!! He can take complex technique and simplify it to where it is easily practical. The focus he places on training the mind as well as the body is very valuable. He also hones in on the little overlooked details that will give one an edge in competition. Highly recommend!

Coach Check is patient and pays attention to details. His recommendations go beyond the mechanics of throwing a javelin; he has shared advice on performance preparation and short & long-term goal setting. His own personal work ethic sets a great example.

Check is always focused on finding the best and most practical training methods. Highly recommend for focused training.