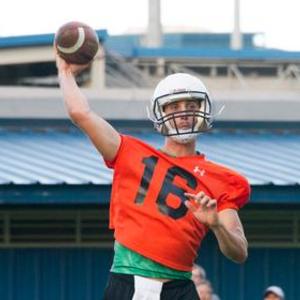 Former Division 1 quarterback that has been taught by legends of the game, such as Norm Chow and Sean Salisbury. Learn qualities that are being utilized in the NFL today! View all coaching experience

My name is Beau Reilly and I just finished my career playing quarterback in the fall of 2017. I've been playing football since I was 7 years old and raised in a very athletic family that features a father that played basketball in college, three brothers that played football at the Division 1 level, a sister that throws shot put and discus in college, and a brother currently playing for the New England Patriots. During my college career at the University of Hawai'i and Texas A&M-Kingsville, I was called on many times to teach my fellow teammates, and even new coaches, about the offense we were currently running and the some of the different defenses we would see each week. Throughout my college career, I did some private sessions with high school QB's that were needing some "touch-ups" on their mechanics and helped them with their reads of the defenses that they were seeing. One of those QB's went on to play in the state championship for their school and another went to the semi-finals of the playoffs. I received many private trainings from some of the best quarterback coaches in the business including Sean Salisbury, a former NFL player, ESPN analyst, and currently a sports radio host, and Cree Morris, who is currently one of the best quarterback coaches in Southern California that also trains with Drew Brees and Carson Palmer periodically throughout the offseason. On every team that I have played on, I had built a reputation for having an advanced knowledge of the current offense that we were running and the overall game of football itself.

I went to Valley Center High School in San Diego, CA where we competed against some of the best high school teams in the country. I led my team to the CIF Championship both my junior and senior year and received All-Conference honors. I was also voted Team Captain, received the Most Inspirational Award at the end of the season, and offered a scholarship from Colorado State University. After college, I served a mission for my church in Sao Paulo, Brazil for two years and, when I finished, I started my college career at the University of Hawai'i when I found out that the coaching staff at Colorado State had been fired. Each year that I was at Hawai'i, the offensive staff was fired and each new staff brought in their own quarterbacks, which made it a little difficult to see the field. After my redshirt sophomore season, I transferred to Texas A&M-Kingsville, where I broke the school record for most passing yards in a quarter with 320 against the #5 ranked defense in the nation.

I have received the privilege and honor of being coached by some of the legendary coaches of this game including Dave Lay, Norm Chow, Nick Rolovich, Daren Wilkinson, Sean Salisbury, and Cree Morris. Dave Lay, my offensive coordinator in high school, was one of the innovators of the one-back spread offense that coached at Colorado State and San Diego State, which is where he coached Marshall Faulk. Norm Chow, my head coach at Hawai'i for two years, has coached many legendary quarterbacks including Jim McMahon, Steve Young, Ty Detmer, Steve Sarkisian, Phillip Rivers, Carson Palmer, and Matt Leinart.

During my sessions, you can expect to run drills that pertain to throwing mechanics, footwork, 1-3-5-7 step drops(under center and shotgun), ball handling(handoffs, pitches, etc.), and other little, but very important, aspects that are involved in the position. Typically I like to spend an equal amount of time on each of those aspects because each one is just as important as the other. However, as training goes on, each session will get more customized to the player according to the things that need to be worked on the most because I am a strong believer in the phrase "You're only as strong as your weakest link". I will never go against what the player's coach asks of them but will be able to teach and show them the most efficient way to be effective in that offensive scheme, considering that I learned 5 different offenses during my high school and college career. It is preferred that the player bring a receiver with them in order to be more efficient with time and some specific drills but if this is not possible, I will act as the receiver or bring one of my own. Not only will I focus on the physical part of the position but also teach about mental part including leadership qualities, overcoming mistakes, and keeping the fun in the game.

The improvement in accuracy, strength and confidence we have seen since working with Coach Beau has us very excited to put into practice this coming season. Our son has gained great knowledge and we love how Beau communicates with him. Seriously blessed to have found such a great coach.

Coach Beau is a great coach and clearly a very talented athlete with a high football IQ. During our session my son looked like a completely different QB. Beau is great at positive reinforcement and found unorthodox ways to help my son understand the things he was trying to teach him. At only 7 years old I was extremely impressed with how focused my son remained during the session. My son has asked me everyday when he will get to see Coach Beau again. I highly recommend you set up a session with Coach Beau, you will not be disappointed.

Coach Beau did a great job of going over the fundamentals with my son. He is very approachable and has a positive attitude. Very good experience

Coach Beau has an exceptional coaching style. He connected with my 16 year old immediately. My son has learned a great deal in 3 sessions and he is excited to continue his training with Coach Beau.

Beau was fantastic with my son! Great coach and a great guy. Really knows his stuff. My son loved his session. Can’t wait to get back to work!

He was one of the greatest teammates simply because he cared enough. He’s, hands down, one of the smartest guys when it comes to football. He’s got a very high IQ. His ability to be able to help the quarterbacks with just simply reading and understanding defenses, you can’t replace that. He’s going to be a phenomenal football coach one day. I love Beau, and I’m going to miss him like crazy.

He was a good mentor for the younger quarterbacks...