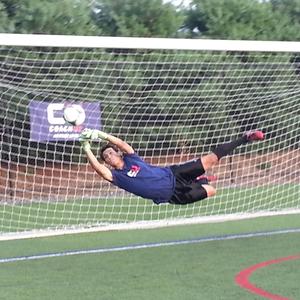 Past sessions
$100 /athlete
Search More Events in Your Area
Event Description:
Event Description:
The Boston Kickers Winter Clinics are coming to NOLA! Designed and run by Club Director, Paul Fomenky, and Harvard University Asst/GK Coach, Vasili Uspensky, the 2-hour clinics allow players the opportunity to strengthen themselves as athletes and soccer players by getting maximum touches while refining technique and comfort on the ball.
Their confidence and contribution to their teams will dramatically improve in time for the spring season. By the end of the weekend, our athletes will have achieved between 2,000-5,000 ball touches! Expect to work hard, play smart, and have a lot of fun!
Field players will work with Coach Paul Fomenky. Goalkeepers will work with Coach Vasili Uspensky. Staff and Asst. Coaches will be present to help, as well.
Camp Highlights
When:
The clinics will take place on Saturday and Sunday (Feb 25 and 26, respectively) mornings from 7:00–9:00 a.m.
Where:
Our sessions will take place at Lafreniere Park located at 3000 Downs Blvd, Metairie, LA 70003. Free parking available.
Ages:  All ages welcome. Players will be grouped according to age and ability level.
Cost:  $100
Camp Coaches
Vasili Uspensky - Men's Assistant and Goalkeeper Coach at Harvard University
Vasili joined the Harvard men's soccer staff as the Goalkeeper Coach prior to the start of the 2016 season with over 11 years of coaching experience.
Prior to joining the Crimson, Vasili worked as Soccer Community Director and Partnerships Manager at the Boston-based startup CoachUp (offering 16,000 qualified coaches in 30+ sports nationwide) overseeing relationships with major and minor sports leagues (NBA, NFL, MLS, MLB, USOC, and others) and helping retired professional players find avenues to coaching. Vasili is also the top CoachUp Goalkeeper Coach in Massachusetts and 42rd coach overall in USA soccer (out of 3,000+ coaches). He is featured in the Goalkeeping Tutorial Videos with 250,000+ views (https://www.youtube.com/playlist?list=PLtWdZBafi-1O9EiSL_M8ajbN8Vw4nKW5p ).
Vasili holds both undergraduate and graduate degrees from Virginia Commonwealth University where he played for the men's soccer team and contributed to a CAA Championship and a top ten US ranking. His undergraduate degree was in international business management with minors in Russian and Spanish language studies (2007). Post college, Vasili had a brief stint with the semi-professional Richmond Rowdies before deciding to pursue a career in the business world. After two years working in Russia, Vasili returned to the #1 ranked VCU Brandcenter to get a master's degree in creative brand management (2011). Vasili was born in Moscow, Russia to a Russian father and Peruvian mother.
In 2012, Vasili co-founded the Boston Kickers, a youth soccer club that has had over 1,000 players participating across the Greater Boston Area (www.bostonkickers.com).
Vasili also spent three years with The Winsor School (a top national private girls school in Boston) varsity soccer program as an Assistant/Goalkeeper Coach. He holds a USSF ‘D’ License.
Paul Fomenky - Director of the Boston Kickers
Paul is the Director of the Boston Kickers soccer club. Paul was the Head Coach of the Winsor School Varsity soccer team for the last three seasons.  Prior to coaching at Winsor, Paul played in the National Premier Soccer League (NPSL) for the Boston Tea Men. Currently, Paul volunteers with the Harvard University Men's Soccer Program. He also captains the Boston Olympiakos, a two-time USA National Amateur Championship winning team.
Boston Kickers
Boston Kickers is a fun and healthy youth soccer enrichment program. Led by professional coaches Vasili Uspensky and Paul Fomenky, Boston Kickers bring top talent to the next level in the Boston area. The Boston Kickers partner with local childcare providers all over the Greater Boston Area to help children develop healthy habits through physical activity and directed play.