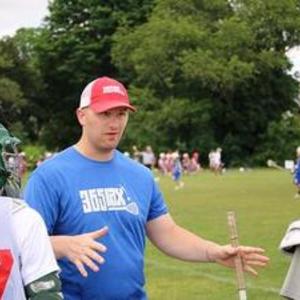 With 16+ years of playing DI College & Pro Lacrosse+running a LaxCompany, I know what it takes to enhance your fundamentals, skills & lax IQ to become the best that you can be. View all coaching experience

I have been giving private lacrosse lessons on Long Island for the past 13 years - I coach kids as young as 3 years of age and up to players in college. From playing both midfield and then attack throughout my youth career where I earned high school All-American honors after helping lead the team to the County Finals, was selected to the All-Star Team and set the Bethpage High School record with the most goals in a game (8), followed by a 4 year division I collegiate lacrosse career and 2 years of Professional Lacrosse in both professional lacrosse leagues (the MLL, Major League Lacrosse and the NLL, National Lacrosse League), I specialize in training offensive players so midfielders & attackmen....My specialty is utilizing my knowledge of the game and then implementing the following list of areas that would make a player 'complete (agility, eye-hand coordination, stick/hand speed, ball control and endurance) with running drills that (i) coaches neglect to do at their practices but expect the players to know how to excel at it in addition to (ii) making sure that the drills I run are created with hours of intellectual thinking that is outside the box where (iii) the client gets challenged from the drills as about 40% of the drills would be something that is a vital tool to have but is not "drilled" over and over again yet is expected you know these vital tools and lastly, I use my keen eye to (iv) focus on the areas where improvement is needed so I then will have them do specific drills after I prioritize the weaknesses that are the most important.

Each individual lesson is unique as it depends on the players merit however, the main focus is to implement strength, speed, footwork and conditioning while performing drills to enhance the stick skills. Per my previous comment, lessons are tailored towards the players capabilities so typically for beginners, the main focus is to teach all the aspects of the game and focus on the fundamentals as we believe the younger you are, the easier it is to break out of bad habits and to begin training with the correct fundamentals.. For experienced players, we still ensure the fundamentals are precise but increase the intensity and perform challenging drills.

The drills I carry out are from what I learned during my playing days, specifically during "individuals" in college which is performed after Fall Ball with 1-3 players of the same position and also with the opposing positions to work on live drills. Also, the other drills I perform were accrued during training camps while playing professionally and from some of the pioneers of the game who I had a chance to work with such as John Gagliardi, Kyle Sweeney, Johnny Christmas, Sean Lindsay and many more other professional players.

The lessons include a lot of repetitions but include drills that no parent or novice would ever think of and requires professional advice. The sessions progressively get more challenging however that is contingent on the performance and advancement of the individual(s).

First 10 Minutes: Warm Up: Focus on cradling, passing, catching, stretching, etc
Next 20 Minutes: 12 Step Cone Drill (15 Yards of Cones Spread out in a straight line with out 2 yards of separation in between each cone focusing on Speed/Agility & Stick Skills)
Next 15 Minutes: Daily Focus Drills focusing on fundamentals (For Example: Shooting, Dodging, Defense, Etc) - Perform technique drills focusing on the fundamentals and repetitions
Last 15 Minutes: Live Drills working on the daily focus
Last 5 Minutes: Recap of the Day (Walk through of the day and ask questions)

Coach Thomas was excellent and very well prepared. He helped my son make the team he was hoping to.

Coach Tom is a motivated and knowledgeable teacher who is helping me achieve my fitness goals. His hands on approach of doing the exercises alongside myself, makes it easier to perform. Having someone like Coach Tom is a great start to my fitness journey!

Tom was very knowledgable and attentive. He has several drills to really improve basic skills. He is patient , reassuring and worked well with my son.

Coach Thomas is great. Only after one session he gave great skill to correct his technique. Thx U!

Max feels comfortable you coaching him and we have tried several different trainers in the past. Throughout the past few years, we have seen drastic improvements with him overall game that include his positioning in the cage, control of the ball when clearing and his breakout passes. We would like to continue with the lessons once a week for the rest of the year, including during the Fall/Winter Travel Team and the Spring/Summer Travel Team.

Emmah had a wonderful experience and would like to purchase ten more lessons. Thanks again and we will see you soon!

You and your brother have been great to my son and have built his confidence and taught him so much as far positioning, how to clear and footwork which has improved his skills as a goalie. We will continue to use your services and recommend your company to everyone involved in lacrosse and strength & conditioning

Coach , thanks for your continued hard work in training my son. With your help, Anthony is able to cradle both hands and put together a few passes and catches with no drops!