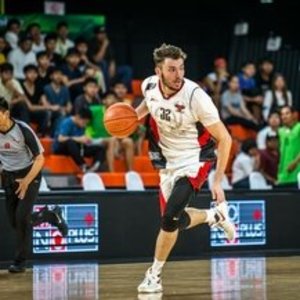 Owner of Statham Academy and Co-owner of Ball Out. Also Head Coach of Creators AAU program. Played professionally in 12 countries and for Philippines 3x3 National Team. Now I'm not anywhere near as athletic gifted as the players I play, but what separates us and allows me to play professionally is a burning desire to outwork my opponents and a unmatched passion for the game. I grew up learning how to play every position 1-5 and the fundamentals were instilled in me by my dad at a young age. I've been blessed to play some of the best players and coached by some of the best coaches in the world. I'm here to pass that along and make you be the best players you can be.

Though every summer I am back home training to dominate the next season I have thrown the Elite 50 showcase, numerous camps, clinics, middle school combines, all star game, and an alumni tournament. I worked with players of all ages from 4 years old to high level Pro all the way to your regular Joe looking to get better at their passion, boys and girls. I've also helped coach different high schools during summer, working with all levels. And finally I train numerous college players playing Division 1, Division 2, Division, 3, NAIA, and JUCO players. I help players transition from college to the professional ranks, while consulting a handful of teams in different countries.

2020 Drafted as a top pick in Indonesia Basketball League. 3x Eurobasket Player of The Week

2019 Invite only private workout with the Los Angeles Lakers

2019 Played in Russia, Qatar, and France

2018 Thailand TBSL Best Small Forward, 1st Team All TBSL, and Scoring Champion. Broke record for points in one game with 57, a week after scoring 50.

Led MS Eagles to the Piala Walikota Cup in Indonesia 2017

Invited to represent the Drew League in Shanghai, China

Mythical 5 as a rookie in the DeLeague (Philippines) 2015

Every player is different, but what every player needs is an amazing work ethic and fundamentals. Basketball is an intense game, so I train players to play off of instinct. Breaking their game down to the smallest details- I push them physically, but most importantly help them grow mentally.

My son had a fun time training with coach Taylor. He commented several times how he learnt something new.

Coach Taylor analyzes where you currently stand, amd where you need to be at the fbd of your session. He does this in a fun manner, ensuring his student understands and is able to demonstrate their understanding to Coach Taylor.

Coach Taylor is a great trainer. He really pushed my son and helped him with his game. With each session, my son is improving and learning the areas he needs to focus on to be competitive.

Michelle feels like coach Taylor is exactly what she needs to take her game to the next level. He is doing an ama!ing job with Michelle. Can already tell a big difference on her overall approach to the game. Look forward to many more sessions.

I really enjoyed my practice sessions with Coach
Taylor. During practice, he pushes your limits for the better, then talks to you during breaks helping build a hard-working mindset which then can be applied in sports and in other areas of your life. At the end he provided very useful drills to take home that helped me see quicker improvements. (Genesis Perez 15, California)

My daughter had her first training session with Coach Taylor yesterday. We drove over 90 miles to meet with him, it was worth it. The session was a great experience. He took the time to explain individual drills. Also, he broke the drills down fundamentally so it made it easier for her to follow and perform. Although this was time consuming he did not hesitate to go beyond the time limit of our session which I appreciated. I would recommend Coach Taylor, in fact we already have my daughter's next session set up.

He was excellent with my 8 year old ! Very punctual ! Also very determined ! Great work out and great skill set !

My son had a great first session with Taylor! He was professional, experienced and very friendly. Just booked 3 more sessions!

My son recently turned 5. Coach Taylor's ability to break down advanced fundamentals for my son was amazing. He kept him focused and delivered the perfect amount of motivation and correction. He is a high level basketball player who is able to make things understandable for all ages. You can see he loves the game which rubs off on the kids. 100 percent recommend him to anyone wanting to push there kid to want to excell.

Taylor's great - never had a better experience with a coach. He's easy going, but still focused on the work. He had a specific plan based on my strengths, weaknesses, & goals - & I could see how every drill was making me better. Strongly, strongly recommend!!

Coach Taylor has a deep understanding of the mechanics of the game and a talent for communicating it to me as a student.
He has changed my game for the better after just one session.
I'm being pushed hard but in a very rewarding way.

Coach Taylor was Awesome!!! My 6 year old had an Amazing experience. Coach Taylor took time and showed patience in making sure my son was comfortable in knowing the drills before moving on to the next. Looking forward to our future sessions.
Thank you Coach Taylor !

Coach Taylor was great. My daughter who is 13 was comfortable with him and said he gave her instructions she could easily follow. She really liked him and we have booked another session.

Coach Taylor helped my daughter's confidence in one session. She is excited to continue working with him until her high school tryouts in a couple of weeks. Thanks CoachUp and coach Taylor.

My 9 year old son enjoyed training with Coach Taylor. He did great job encouraging while challenging him to better his skills and try harder.

Coach Taylor was great. One session already made a lot of difference to my son. Thank you coach.

Coach Taylor is great. My son liked him the very first day they met. My son is 8 yrs. old and he said that coach Taylor is very patient and nice. He said, he felt that he is improving after 3 sessions with him. He definitely wants to continue with his lessons. I do recommend him to my friends who's child needs help with the fundamentals in basketball. Thank you coach.

Coach Taylor did a nice job with my son Jonathan. Got him excited to be more aggressive with accompanying techniques to promote the aggression

My boys left thrilled, invigorated, and excited to play. He was great at challenging their different age levels, while still making them feel successful. Great experience.

Coach Taylor was OUTSTANDING! My son was nervous at the start, but within a few minutes Coach Taylor was running my son through some drills and pushing him to do his best, while providing honest feedback in the process. My son is 11 years old and was excited after the workout as he was learning a few drills and also fine tuning his shooting and ball handling techniques. I would recommend Coach Taylor to anyone who wants their child to enjoy and learn more about basketball. We will definitely be scheduling more workouts!

Coach Taylor worked well with my daughter with training and pushes her if needs be, great coach to have.

Coach Taylor has been a perfect match for us so far. Only after two sessions, I have noticed a difference in my son's ability and skill level on the court. Coach Taylor has personalized the work outs to meet my son's individual needs as well. I would refer him to to anyone who wants to improve their basketball game. Mary

Trained with him and his dad in 9th grade.. Never really played basketball before i was just 6'3" and uncordinated so my coach through me in the post. During summer I didn't really play alot of minutes, but after working with them all fall I became a double-double machine and started almost every game my freshman year

Such a great trainer! Taught me so many little things on the court that I use now without even thinking. Working with Taylor completely elevated my game!

Taylor is the ultimate basketball junkie. I love working with him. He really helped me transition from a JUCO to a 4 year school this past summer. Got me ready physically and most important mentally.