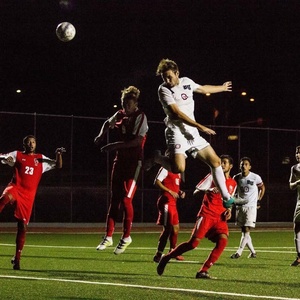 Former NCAA All-American & All-Conference athlete at Biola University, and I have coached both boys and girls of all ages in San Francisco for SF Glens FC. View all coaching experience

60 minute, remote training 1 on 1 session with full guidance and video demonstrations of all drills.

60 minute, remote training 1 on 1 session with full guidance and video demonstrations of all drills.

30-minute Zoom or Phone Call: Consultations with Coach Samuel for Parents, Players, or Coaches. Samuel will answer any question about soccer, from team selection, college recruiting, and many other topics. I can also provi... See More

30-minute Zoom or Phone Call: Consultations with Coach Samuel for Parents, Players, or Coaches. Samuel will answer any question about soccer, from team selection, college recruiting, and many other topics. I can also provide home training programs and video analysis of matches or training.

I have experience coaching boys and girls ranging from 4-40 years old. I was a coach in San Francisco for an organization called SF Glens FC, and then I started coaching in Orange County after playing college soccer at Biola University.

2018 I was offered to play PDL (Semi-pro) for the So Cal Seahorses which I turned down because at the time I was also speaking with USL (Professional) coaches who said I was good enough for professional level. I tore my ACL prior to going pro, and since recovering I found a passion for coaching.

Biola University 2015-2016
• Earned All-Conference 1st Team honors in 2016 at Biola
• Led the team with 1,581 total minutes
• Played in all 17 of the Eagles' matches, earning starts in all 17
• Scored two goals, including the game-winner against Hope International
• Had three assists to push his point total to seven (fourth on the team)

ACADEMY OF ART
• Player one season for the knights, logging the most minutes played among his freshman class
• Appeared in 18 matches

I will cater each session based on my clients skill level. The first step is to have each client set what goals they wish to accomplish, and which skills to improve. Once we have the goals set, I will decide which drills best suite my clients needs. But a general outline of common drills will look something akin to this:

1. I start each session with quick warm-up. This consists of ladders, agility work etc. Agility work and quick feet are crucial for all soccer players.

2. Dribbling patterns that help to hone the muscle memory.

4. Juggling/volley drills. I work on feet, thighs, chest, head, and shoulders depending upon the individual skill.

5. Passing drills, with emphasis on first touch, awareness of surroundings, passing to lead foot, checking in, through balls etc.

7. Shooting drills. I set up scenarios where they have to receive a pass and shoot, juke out a defender and shoot, receive a set-up for a volley-shot etc. Emphasis on placement and technique.

Coach Sam gave excellent pointers to my daughter to help her improve her defending skills and shooting.

Coach Samuel was responsive and easy to communicate with to set up training for my two high school aged sons. They look forward to additional training with him.

Coach Sam is a great coach. He is really patient, fun and builds confidence in my daughter. He plays defense on her and give her real game scenario’s to practice. He is like a big brother and mentor. Well worth the money, he will not disappoint and he is good with demanding parents like myself.

My daughter likes her one on one training with Coach Sam. He is very good with footwork and is teaching her skills on different levels. On top of that, he is patient and kind with her. I can’t wait to see her showcase what’s she’s learned from him and bring back her confidence and love of the game.

My daughter (15yrs old ) and a beginner was comfortable with Coach Samuel. From what I observed ,he understands how to communicate to his client, not just verbally but he will demo it and explain it's purpose in the game ,in addition to his personal demeanor that helped my daughter to receive the instruction and process it . My daughter left our first session feeling and knowing she left with something more than she came with .
Thanks Coach Samuel

Coach Samuel coach is fantastic communicator and assessor of talent. He smoothly covers the key mental and technical aspects of the game. The hour goes by fast.

Coach Sam has great teaching techniques and drills and has been working with my 7yr old daughter. We are 2 sessions in and she has already shown incredible improvement in skill and is easily utilizing new techniques he taught her. Highly recommend.

Sam is great and easy to work with!

Coach McKay is a kind and professional coach. He knows what he is doing and my son enjoys playing under his guidance. I believe that he has grown in skill and character under his care and I am very satisfied with his coaching style!