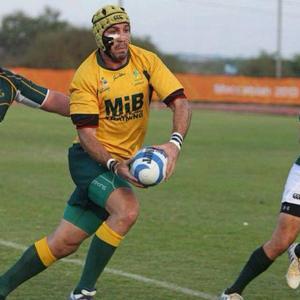 Become a Defense/tackling machine, the ultimate teammate, an inspirational leader and an absolute gamechanger on the Rugby field! View all coaching experience

I have lived and breathed Rugby since I was a toddler. I played competitively in Australia for over 10 years and have since coached for the past 6.

I have played almost every position on the field and have a sound understanding of the game. I have been coaching for the past 4 years, have SMART rugby coaching certification and am adept at coaching all facets of the game. Defense is my speciality, so if you want to learn to tackle effectively, I'll teach you the tricks of the trade. I am also well versed in other set plays like lineouts and scrums, as well as a merchant of the ruck/breakdown. I have a wealth of knowledge about managing your body and preparing your mind for the 'game played in heaven', and I love sharing this my infectious enthusiasm. As a player and coach I have a proven track record, but my individual mentorship, man-management and leadership coaching is probably my strongest asset. I can coach individuals, small groups or entire teams.

I will teach you to master the game of rugby, become the ultimate team player, and develop you into a strong leader, all while learning one of the greatest sports in the world!

As a player:
- I was vice captain of the gold medal winning Australian Maccabiah Rugby team in Israel in 2009
- Captain of the silver medal winning Australia team in Israel in 2013.
- Captained our local side in Sydney, Australia to a championship in 2009 and runner-up on two other occasions.
- Range of awards collected over the years including: 2x Player of the year; 2x Player's Player; 1x Clubman of the Year; 1x Leadership award; 1x Back of the Year; 1x Forward of the Year

Hugely customized based on assessment of player/group/team's current levels, their areas of improvement, and time of season.

The typical session could be any of the following (and more):
* Rugby specific off-season strength and conditioning training- prepare the body and mind
* Goal setting - Setting, and then hitting goals, are an important part of improvement and development.
* Knowledge and theory sessions- learn the game
* Skill training- learn the art of the game (master basic catching and passing rugby-style)
* Speed training- years of sprint training to improve speed
* Game development- anything from ruck/breakdown work to defense to set plays etc. Also a master of the darker arts like rolling mauls and patterns of play
* Safe Play - Rugby is a contact sport, I teach to take care of the body in contact. Learn to make and take the hits
* Leadership development- mentorship and leadership skills and dev
* Personal development- rugby is often said to be an imitation of life. Improve yourself as a rugby player and become a better person. So true!

All skills and techniques taught are always then applied in simulated rugby scenarios.

My son had a great session with Coach Keith!! He just started leaning the sport and needed help with tackling. Coach Keith worked with him step by step, building to a full tackle. He provided him with a strong tackling foundation and helped build his confidence to take on the field. We strongly recommend him!!!

Great first session with coach Keith. He was quickly able to assess my current fitness and provide pointers on my kicking and things I should work on over the Christmas break. Looking forward to more sessions with him. I would recommend coach Keith!

Coach kieth is an amazing coach. His vast knowledge of rugby along with the know how mechanics of the game really pushes me physically and mentally to the next level. Working on my weakness while sharpening my strenghts, giving me the vital tools needed to be a well rounded player.

Keith was fantastic. His knowledge about the game is extremely profound and he's also a great guy. Highly recommended!

Over and above his strong technical knowledge of the game, Keith has a unique ability to foster confidence in players and develop cohesiveness among the team. His ability to teach and mentor players of all skill levels makes him an asset to all rugby clubs

Keith is the ultimate team man. He is driven to give his best to the players he coaches, being the first to arrive at trainings and games, and the last to leave. With Keith as coach, players cannot help but try to emulate his passion and dedication to rugby. He has a depth of rugby expertise unseen in most career coaches that only comes from genuine love for the game. Keith thrives in the team environment, and brings out the best in those around him. He is well respected as someone who would never ask a player to do something that he is not willing to do himself. Being coached by Keith Friedlander was one of the best rugby experiences of my life, and any club, coaching clinic, school or otherwise, would be lucky to have him in their ranks.

I had the pleasure of being coached by Keith in 2013/2014 after playing with him for 8 years. Having played as both a back and forward, he is equally as passionate as he is knowledgeable, about rugby. He is a great personality to have around a club and an excellent communicator. Specializing in the most frequent parts of the game, the tackle contest (loves defense!) and the breakdown, I highly recommend Keith as a coach!

I met Keith in 2012 when I began playing rugby union with Maccabi Rugby NSW. Keith was club captain at the time. We had former Wallabies great Glen Ella coaching the team into the 2013 Maccabiah Games and expectations were high. Keith demonstrated his virtuous abilities in his role. He showed a genuine interest in not only his fitness and wellbeing, but that of his fellow players around him. In 2014, I felt I wanted to step up and make the first grade team. I knew the issue for me was my awkward tackling technique. I told Keith I wanted to make the move, he asked me what I thought I needed to do to improve to the standard. I mentioned my defensive woes. For the following weeks, Keith took it upon himself to come to training an hour early to teach me how to tackle. He had no obligation to do so. Nor any reason other than he wanted to help a younger player achieve his goals. We did not stop until I was already in the firsts team and I went on to play in that entire season. These characteristics are just some of those that make Keith the amazing athlete and sportsman that he is. He is definitely a captain and coach that was able to get the best ability out of me as a player.

I had the privilege of playing with Keith and to be coached by him. His passion for the game coupled with a high rugby IQ enabled him to accomplish things on the field that few could match and thus inspired others to raise their game to another level. This passion has translated seamlessly into his coaching, instilling in his players an attitude that pushed the limits of their potential. Keith always has time to offer individualized support to each player and under his guidance I became a more versatile player improving in a number of skills, particularly my approach to defence.