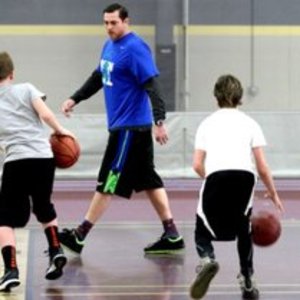 Ex - Collegiate and Professional Athlete with years of experience training and coaching all levels of athletes. View all coaching experience

I have coached/trained for 8 years and have experience working with players of all age levels and skill levels. I have players that range from 8 years old to professional athletes.
I have been director of operations for Arizona Premier Basketball Academy, Arizona Magic Bball Club, and currently own and run Passion4ball basketball Academy.

Justin Allen has been a coach and mentor to our son for the past ten years – and continues to stay in touch even now that our son is away at college. With Justin and Mike Romero’s support and training, our son was able to acheive his lifelong dream of playing college basketball. Justin is the real deal – no politics, no drama, just cares about helping players to reach their potential.

As a current club coach and former basketball player in the state of Arizona. Justin Allen’s name is synonymous with passion. He is full of energy whether it’s in conversation or evident in his coaching whether it be in training,practice or a game. Justin has worked with many of my peers during my playing days and the results show. If I had to recommend a kid to anyone outside of the club program I coach with I would send them to Justin Allen and Passion4Ball. Justin is 110% real, he won’t feed you any BS or deal with club politics. He is all in for the kids and the PASSION of the game he has. Justin is not only a mentor to myself as a young coach but a friend for life.

After years of disappointment in the quality of basketball coaches in the Valley, I finally found Justin Allen. Justin not only knows the game and what it takes to improve your skills to be competitive, he also cares about the development of the player as a person. He is tenacious about correct form. Justin focuses on the players development from the ground up. If your form is not consistently done correctly, he works tirelessly at establishing it. Not only has Justin improved my sons basketball form and skills, he has become an invaluable mentor to my son and a respected role model in our lives. Justin does not train for the money Justin trains for the Passion.

My son Bryan played with Justin’s team Passion4ball and had such a wonderful experience. Justin is not only a great coach but a wonderful person and mentor. He helped Bryan improve his skills and also helped him with his recruitment into a university. He spent his own time developing a website for Bryan and has spent endless hours reaching out to coaches on Bryan’s behalf. We have truly been blessed to have him in Bryan’s life.

It’s difficult to find a coach who can match the devotion and passion Coach Justin has for the game of basketball, but most importantly his player’s futures. Work with him not only installed a level of intensity in me, but it brought back the enjoyment that many players miss now days.

Coach Allen is truly passionate about the game game, but also the success of his players. He prepared me for my senior year of high school basketball. He will do whatever possible to make a player better and help him with his goals. Coach Allen is highly regarded in the basketball community, and knows and communicates with coaches and players throughout the United States. he will do his best to get a player to the next level. My parents and I are extremely grateful for coach Allen and all that he has done for me

Justin worked with Kyle during club season and during the off-season for skills work and technique. He has an always positive attitude, with high expectations of the trainee. He has the perspective of a player coming from the high school ranks into D1 college ball, then playing professionally for varied teams and coaching styles. I heartily recommend Justin as a trainer and coach.

Thank you for your help with my son. Thanks to your guidance and coaching skill; he went from not making the team as an 8th grader, to being a starter as a 9th grader ! Your passion for the game has motivated him to be the best player he can be

Justin has trained my son Dylan for many years. He works him hard but is always encouraging and positive in how he teaches the fundamentals of the game. Justin is team oriented in his approach with the players he trains and follows up with them often after games and takes time to talk to them and see how they are doing. It is more than an hour training session, it is a relationship. Justin is the best shooting teacher around, his technique and knowledge of the Shot is second to none. Glad we have known him for the years we have.

Justin has been such a positive influence on my son, both on and off the court. In the short time Justin coached Hayden, his skills, confidence, and basketball IQ reached a new level. Justin encouraged, motivated and made sure Hayden was ready to pursue his dream of playing college-level basketball. Justin was Hayden’s advocate throughout the recruiting process and was the first person Hayden called when he received his first college offer. Justin is an outstanding individual, coach and mentor, all a direct reflection of his outstanding overall character. My only regret is not finding Justin earlier than Hayden’s final season.