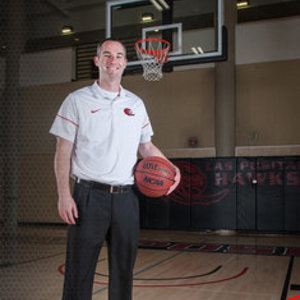 In addition to working as a skills trainer and private basketball coach, I've been an assistant and head coach at the high school varsity level for five years. After my college playing career, I stayed on as an assistant coach at my alma mater, Northwest Christian University, for two seasons. I've also coached and directed various basketball camps throughout California and Oregon for 12 years. For the past 5 years, I've trained players in private and small group lessons through CoachUp and my coaching business, Green Light Basketball. In 2018, I earned a Master's degree in Exercise Science with a focus in Sport Psychology. I currently work as the Associate Head Men's Basketball Coach at Las Positas College (6th year there) where I also teach in the Kinesiology department. In 2020, I created and launched "The Fearless Shooter Training: Your Basketball Shooting Blueprint", an online course covering all aspects of basketball shooting. It is packaged into a 7-part video series and available here on CoachUp in separate segments or can be purchased in full with access to my 49-page e-book on my website, greenlightbasketball.com.

I've played competitive basketball since I was 12 years old. As a high school player, I played on the varsity team for three seasons at Berean Christian High School, setting four school records in three-point shooting and free throw shooting. I earned first team all-league honors as a junior and senior. In the offseason, I competed year-round and played for one of the premier AAU programs in the nation - the Oakland Soldiers.
After HS, I played two years of JUCO ball at Los Medanos College and led the conference in three-point percentage (42%) and free throw percentage (87%) as a sophomore.
From there, I was offered a scholarship from Northwest Christian University in Oregon. I was a two-year starter there and the second-leading scorer on the team both years. As a senior, I averaged 16 points per game against Division 1 opponents and was named to the Academic All-Conference team. I finished my college career ranked second all-time in three pointers made in school history.
After college, I played for two semi-pro teams - the Oakland Showtime (now Bay Area Matrix) of the ABA and the Tualatin Rainmakers.

Having played the point guard and shooting guard positions throughout my career, you can expect a lot of ball-handling and shooting instruction. Building a foundation of good habits is vital to any player's success. I teach the fundamentals of footwork, how to get open, set screens, and the correct shooting form for every type of shot.
More advanced instruction includes teaching individual moves to score, how to read and react to your defender, and developing counter moves to primary moves.
A great deal of emphasis is placed on taking the right mental approach to the game. I believe the worst thing a coach can do is overcoach a player. I do my best to keep things simple so a player isn't thinking too much while they play.
The object of my workouts is to instill the right habits in each player so when game time rolls around, they're ready to play relaxed, confident, and be a key contributor to their team because they've dedicated themselves to the process and preparation. I've put my heart and soul into this game since I was a kid and know how to play the game the right way. I'm excited to share my knowledge and experience to make a positive impact on every player I coach.

Great coach who knows his stuff

Coach Jordan has been Spectacular to work with. My daughter is extremely happy with what she is learning during the training 1 on 1. She is already applying what she learned during her AAU games with success. He is an outstanding teacher/trainer, and highly recommend him.

I hired Jordan to work with my 13 year old son, who is a good player and wants to get better. Jordan worked with him on his shooting form and we could tell an immediate difference. Jordan also taught him some moves to get open and moves to get an open shot off the dribble. Additionally, Jordan worked with my son on improving his left hand. Jordan's teaching style made it easy for my son to learn and the drills were fun for him. This was all in one session and it made a big difference and gave my son some things to work on. We'll look forward to additional sessions with Jordan and I highly recommend him to others!

Jordan is a smart and thoughtful coach. He does an excellent job breaking down basketball fundamentals, making it accessible and fun. He is an excellent communicator, and student of the game, Jordan really knows to help you improve as a player. Highly recommend.

Coach Jordan is a great coach. He is very patient even when I mess up. He is a great teacher and I have learned so much from him.

Coach Jordan was FANTASTIC! My son, a freshman in high school, really loved his first session. Jordan was positive, friendly, and extremely knowledgable about basketball. My son connected with him right away. Coach Jordan was able to catch a few things my son needs to fix to help him with his shot. Jordan's drills and workout was not only fun, but productive. We look forward to booking more sessions in the future with Coach Jordan!

Jordan is an excellent basketball coach who really knows how to connect with kids. During our first lesson, Jordan was quick to point out things in my son's game that he liked, and then identified ways to improve his game in an exceedingly positive and constructive way. The lesson was fabulous and my son was excited to continue practicing after the lesson. We look forward to future trainings with Jordan and cannot recommend him highly enough.

Coach Jordan is a really good teacher, and give positive reinforcement and has a good understanding of the game. I would go to him again. He is also a very nice person and very flexible in trying to meet you schedule for lessons. We would recommend him for anyone who is requiring excellent basketball instruction. 5/27/16 update: We are now moving out of the area and I wanted to give updated information about Jordan since we have more experience. Jordan is very kind, is a great leader and is very flexible with all of your needs. My son has improved quite dramatically and so enjoys that time that he has had with Jordan. He is a wonderful person and excellent teacher, I would recommend him for any aspect that your child might desire out of a basketball coach.

Jordan has been a great coach - in just a few sessions, my son is already showing marked improvements.

My son is a freshman in high school and has been playing basketball for awhile now. We decided to get him a personal coach, and found Jordan on coach up. My son was very receptive to Jordan's coaching techniques and is very much looking forward to the next session. Jordan was very patient and made sure my son got it before moving on to the next thing.

Coach Jordan is an awesome, awesome coach. My 13-year-old son really likes his style. He breaks things down and slowly goes through them step-by-step. At the end of the session he reviews what was covered and gives feedback on things to work on. He has great energy and is very positive. We'll definitely be booking more sessions with him.

My daughter is two sessions in with Coach Jordan and the improvement is visible. Jordan's ability to communicate with any age group is a talent few have. Can't wait to see the progress after more sessions.

Coach jordan is a phenomenal coach. In just one lesson i immediately saw results. I reccomend coach jordan to all athletes.

My son enjoys taking lessons from coach Jordan. Definitely will be booking more hours with him.

Very good coach! Ive got more knowledge about the game just from one session

Great guy, cool Coach who is very open into knowing what you want to work on and showing you drills to improve that certain skill. Coach Jordan is very good at observing shooting technique and corrected some of my shooting errors. In are session I learned the correct way to perform a floater which I've been doing/practicing wrong until I met Coach Jordan. He also provided me with a better insight on freethrows and taught me how to come off setting a screen into getting open for a shot.

I coached Jordan Whittenburg at the high school and junior college level. He has a huge heart and real passion for basketball. In all of my years of coaching, I've never had a player that works harder than Jordan both on and off the court. I highly recommend him.

I had the pleasure of coaching Jordan for two years. He was a player with gifted abilities, very hard working, and was always focused. He's always been a great student of the game. Jordan is very personable, creative in his thinking, and has good communication skills, all of which will serve him and his players well in his coaching future.

As a two-year basketball player at Northwest Christian University, throughout the 2009-10 and 2010-11 campaigns, I’ve come across many different coaching styles and attitudes. From the head position, to the first and second assistants, all the way down to player personnel, each coach has had their pros and cons, all calculated and intertwined into the overall focus and direction for the team. As I entered into visits to the school in the spring of 2009, Jordan had recently finished his senior season and was heading toward the road for graduation, while having to release his commitment to the game he loved the most, and focus on marriage and a future occupation. He was always encouraging to me, as I came in as a “new guy” not knowing many people, and he instantly made me feel welcome. Whether it be a few words of advice here or there during a pick-up game, or a team meeting in which each player was able to sit down with past players and current coaches, one thing remained consistent: Jordan’s insight and knowledge for the game was contagious. The transition from player to coach is never an easy one, as you have to allow yourself to come to terms with the fact that your playing days are over, but you can still share your wisdom and passion for the game with others. He fulfilled this role in every aspect. Jordan became a GA (Graduate Assistant) for N.C.U. the following season, and it quickly became clear that he was down to business as an assistant coach. During practice, Jordan always spoke with emphasis and clarity in his examples, while demanding attention, energy and effort from the players he was working with. His age and recent graduation played no part in gaining respect from players, as he was able to better relate and more calmly discuss and convey the points that were trying to be made. He was always willing to stay after practice and help players with their form shooting, or to come in beforehand to review film. Jordan has a very keen sense for coaching, and his basketball IQ has continued to rise as a true student of the game.

In 17 years as a basketball coach, Whit was the best shooter I ever coached. He was also an outstanding student and has great character.

Jordan is one of the best shooters I've ever played with. Every time he shoots, I expect it to go in. That is how great of a shooter he is.