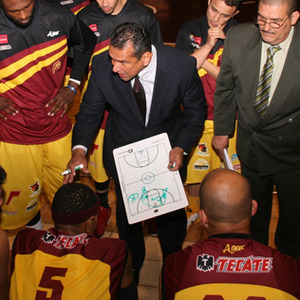 Currently, I am the Head Coach of Fuerza Guinda of the FIBA Americas. I have led the team to a Top 4 finish all season long and the team is currently poised for a playoff birth. Playing 4 games per week, this season has proved to be challenging and I have met each challenge and surpassed them.

During this 2011-2012 season I was instrumental in getting players into jobs overseas, having placed Jarron Collins and Mardy Collins into the CBA in China, Salim Stoudamire into Italy, Sam Clancy into Argentina, James Porter into Japan, Calvin Hampton into Bahrain. Over 100 players have come through Los Angeles to get player development training including the future Hall of Famer NFL player Simeon Rice who came out to LA to train for 3 days in strenuous basketball training.

I coached in high school, college and professional basketball in Arizona, California, Oregon, Mexico and Bahrain. Most recently, I was the successful Head Coach in the Premier League in the country of Bahrain in the Middle East since March 2010, leading the team to a Final Four finish. Prior to that I was the Assistant Coach at Cal State Stanislaus University in the CCAA Conference and an NCAA Division 2 institution. I was also the Associate Head Coach and Director of Player Development for the Culiacan Caballeros of the top league in the Mexican Professional Basketball League (LNBP). As a first-year franchise, the Caballeros went to the LNBP playoffs in a top 6 finish.

As a guest speaker in Italy, Croatia, China, Colombia, Dominican Republic, Bahrain, Mexico and soon to be Israel, I have earned a reputation as an authority on player development and I have produced several DVD’s on getting athletes better through individual training.

I graduated from the University of California at San Diego in 1990 with a bachelor’s degree in Economics. I played one season at UC San Diego and three seasons at the University of California at Santa Cruz. In 1985-86, I was the Leading Scorer in the United States (USA) as I led the entire NCAA Divisions with 31.2 points per game scoring average. I earned All-Conference MVP and All-American candidate honors all three of my years at UC Santa Cruz as I scored more than 2,450 points in my career. I am the All-Time scoring leader in University history and my number was retired this year. I went on to play professionally in Spain and Mexico for four seasons earning various honors including several All-Star selections.

2. Warm Up: I use a 2 ball warm up. Starting with the player in front of the rim in the key. Continuous quick shot really emphasizing technique of Balance, Eyes on the target, Elbow and follow through (BEEF). I will alternate from chest passes to bounce passes…working our way up to 1 dribble pull up for each hand and then working to 2 quick dribbles, emphasizing the quick pickup of the ball. We will then move to the other side of the key working on the same moves and then finish on the opposite side of the key.

4. Shoot free throws: Work on Balance, Eyes on Target, Elbow at 90 degrees, Follow through and finishing with elbow above eyebrow and on your toes and pose. Usually make 4 and then onto next routine.

23. Left Wing Slide and flash: Start in a stance at the bottom of the circle and then slide out to sideline and then flash into middle.
a. Elbow jumper
b. 3 point shot.

27. Elite 8. Make a power move under the basket, then out for a quick 3 in the corner, come back and put the ball in basket off a bounce off the floor, then to the free throw corner, for a shot, then out to the side and come back hard for a shot at the corner, then out to half court line, and make a move for a shot. If you make 8 you are done, if not then continue onto the other side of the court.

29. Elite 8. Make a layup under pressure, then out for a 3 point shot in corner, then back for a follow-up lay-up, then to the nearest free throw elbow, then out to the sideline catch and take one dribble for a shot, then out to the corner of the halfcourt line and make a double move…then into the other side of the court doing the same moves until 8 baskets are made.

31. Final Four. Must make 4 shots in a row from the Corner, right wing, corner, left wing without stopping.

32. Make 5 Free throws in a row-miss and slide in a stance to the sideline and then back.

There are currently no reviews or testimonials for John S.