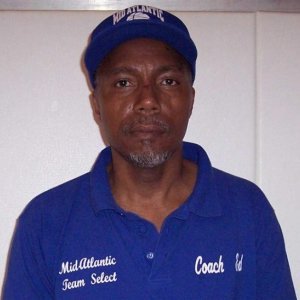 Message Coach
Fast Response Rate:
The percentage of time Edwin A. responded to client inquiries within 48 hours in the last 3 months.
100%
Training Locations

Over 25 years coaching high school, AAU, Boys and Girls Club basketball. Played 23 years US Army basketball, including one year semi pro ball in Istanbul, Turkey. I help players develop higher levels of shooting accuracy, consistency and concentration. My focus is on players shooting off the catch, shots off the dribble, and shots off screens. I use the Dr. Dish All Star, which allows more shots in less time. Get up to 500 shots in one session, while improving shooting arc and stroke.

Played 23 years US Army basketball. One year semi-pro basketball in Istanbul, Turkey. Played on Washington DC NBA Hoop It Up Championship teams 1997 and 2003

I use the Dr. Dish All Star shooting machine on my backyard court*. Players can get up to 300-500 shots in an hour depending on their skill level. (*Weather permitting) Tripod is available for video. I use Home Court app, however there a many versions. Depending on the player we determine the amount of shots per set and shot locations according to their preference.

The Dr. Dish machine has a USB outlet to enable players to download their shooting statistics and track their progress over time.

Coach Edwin worked with our son and helped build his confidence and skills. He was on time, easy to communicate with and a great coach.

Very good session and my daughter enjoyed. We are looking for more sessions.

Coach Edwin is helping my son get back where he needs to be. He hasn’t trained consistently since the pandemic, and coach is helping him find his shooting rhythm back. He has the patience an knowledge to teach the game. We are grateful to have discovered him

Coach Edwin was great he listened and asked my son question on what he need to to improve work with him on the things he needed help on. I will most definitely book more session at 2 times a week and at less once once basketball starts

Very grateful coach, I feel as though my shot has become more steady and I feel more confident in my ability to shoot. Also was able to get up a lot of shots within the 1 hour and I will definitely be scheduling another session soon.

Coach Edwin has helped my son, Ezekiel, improve his basketball game. His friends have commented on the improvements. From the first session, coach Edwin showed my son, what to do to improve his shot. Also, Coach Edwin
sends Ezekiel additional drills to work on when he isn't in session with him. All of the coach's feedback concerning my son's training has been positive and great pointers on how to improve. Coach Edwin is patient and demonstrates much knowledge concerning the game of basketball. I recommend Coach Edwin Atlas to others as a basketball training coach.

Coach Edwin Was really Helpful on helping me improve my game with each drill. Highly Recommended.

Coach Edwin is great! He took the time to help my son learn the correct shooting form and breaks down the game to make it easy to understand.

Coach Edwin was a great coach. The workout was definitely what my son needed, he's beginning to get his game back. I recommend him!

Hello, My name is Marlo, I'm the parent of Anthony Jenkins, Jr. Who formally training with Coach Edwin Atlas for years. Coach Ed met my son at Suitland High School when he was about 14 years old when he started to train playing basketball. My son did not know a thing about ball playing when he started to train. He was very timid and some what insecure about his skills. Anthony was doing absolutely terrible when he met Coach Ed, that soon changed. Time was nothing to Coach Ed, he would go to my son's school to make sure he was doing his work and after would take him to his home or a gym several times a week to improve his ball skills. My son needed a mentor and athletic trainer. When Coach Ed met him he was 6'3 and finally stopped growing at 6'9". He found confidence in his ball handling skills such as rebounding, jump shots, boxing out, assisting, bounce pass, chest pass, slam dunk and so much more. Anthony was taught so many ball handling skills he would help Coach Ed train other young boys with the skills he learned. I would recommend Coach Ed to any parents looking for a dedicated Coach who will mold your kid to work hard not only on the court but academically as well. Coach Ed always says education and balling goes hand in hand, you can never be a baller and not handle your business in class. He will never give up on your kid as long as they are willing to put in the work. Thank you,

Coach Ed... as we would always call him, mild-mannered and always a gentleman! He never raised his voice to get his point over to the young men. He spoke   and they listened!   Coach Ed discovered talent in my son Jeremiah and one day he reached out to him after watching him play a few games. Coach Ed Coached and mentored my son during his junior and senior years in high school and helped my son to improve his game.   He would also work with my son during the off-season through clinics and mentoring programs. Coach still checks on my son who is now a junior at Virginia State  University. We will always be grateful for the seeds of greatness Coach Ed has sown into Jeremiahs’s life. Thank you Coach Ed!  Sincerely,

Coach Ed always went the extra mile to make sure your were working hard on and off the court. - Daemond Carter, Southern Vermont College ​

My two sons have known and worked with Coach Ed for the last five years. He has been a great help in their development as players and people. In addition to his deep knowledge of the fundamentals of the game, Ed knows all of the pieces fit together in the NCAA world – what the coaches are looking for in their recruiting, how to manage the AAU process, how to use social media, alternative options if things the D-1 hunt does not go well. Coach Ed knew how to get through to my boys with just the right combination of pressure and support. His help was invaluable.

Succinctly, Ed Atlas is impeccable at his craft. My son was a marginal player on a great team. My son had been on AAU teams and had trainers. Then there was Coach Atlas. His persistence, knowledge and manner was just what my son needed. In short order, Ed dug deep and made the connection that resulted in college basketball. The goal! Coach Ed has a methodology that leads to college ball. It involves studying, encouragement, and steps to take to get noticed. Simply, if applied it works! Coach Ed takes copious notes and individualized what he sorely needed. The notes led to stats. The stats led to proof, even when I was at the end of my threshold! You can't argue numbers... This coach's approach, commitment, strategies and skill level are a recipe for success!