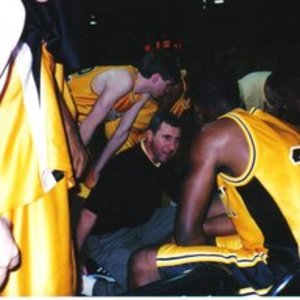 COLLEGE STUDENT (1988-1992): coached AAU and youth league teams during season in addition to working in LSU Athletic Department Administration and an assistant to Men's Basketball coaching staff at LSU

I WILL TRAIN ANY GENDER, AGE OR SKILL LEVEL- SESSIONS INCLUDE:
'Whole-part-whole' teaching philosophy. Command, practice, guided discovery, learner initiated teaching styles utilized
Game speed training with specific emphasis on footwork (MOST IMPORTANT FUNDAMENTAL FOR ATHLETIC SUCCESS)
Fundamentals training for areas the player or parent wants to be improved
Explanation and practice of small details to develop championship habits both efficient and effective during games
Intense focus on superior execution when a player becomes tired
Homework drills between sessions; only for short periods (20 minutes twice/three times a week) as to avoiding burnout
Learning basketball IQ, mental, and conceptual training to avoid poor decisions during games
Teaching clients how to play; not to simply running plays without being able to analyze game situations
Occasional small group training based on skill level for learning team concepts in a competitive environment
College and NBA conditioning drills per session immediately followed by foul shooting for 6 to 9 minutes

Great first session. Covering the basics and building a foundation.

My son's first session was great. Coach Ari was very detailed about drills/mechanics & my son cannot wait to go back:)

Coach Ari showed a great amount of patience with my 9 year old. There is no doubt he has a vast amount of knowledge and experience. He broke down some of the basics to help build a solid foundation. I'm excited to see how he builds on that. My son really enjoyed his coaching style, and can't wait for the next practice.

Coach Ari is very professional and knows what he’s doing

My son said that coach Ari is a great trainer and his first session was exactly what he thought it would be. He said coach Ari is very hands on with a great attitude and he looks forward to working with him.

Coach Ari is an excellent coach! My son has learned so much from him in just a few sessions. Coach is thorough & very patient with his students and you can see his passion for teaching basketball to young students. He has continually offered words of encouragement & praise to my son, and has given him motivation & excitement to learn more! If you’re looking for a top-notch coach, Coach Ari is the man!!

Larry had a great time. He was given things to work on at home and is excited for another session. The one on one attention made a ton of difference.

Great Coach I learned a lot today. Can’t wait to book another session

Absolutely loved our first session with Coach Ari! He has my son so excited about his next session. He literally hasn’t put his basketball down since we left. I already know this was a great decision. We’re all looking forward to seeing what Coach Ari presents next. His method of grasping their attention and teaching the fundamentals is outstanding!!

The first session with Coach Ari was exactly what the doctor ordered. He is very professional and my nephew enjoyed working with him. Coach Ari was able to pinpoint the weak areas that need work. We will be working with him again. There are a lot of coaches on here and I was unsure about who to go with. Thank God I made a great choice.

I was very pleased with the instruction and skills drill. He related well to my son who is a sixth grader. My son seems very motivated to improve before next lesson. Highly recommend coach Ari.

great coach really knows what he talking about

Coach Ari did a great job at my sons first session they started out with the basic fundamentals which is footwork. Thanks for squeezing us in today.

Coach Ari is a great coach. After one session, my son has learned life changing techniques.

I booked Coach Ari for my boyfriend, and I've heard nothing but rave reviews! After one session, he has learned techniques that have already improved his game. We will definitely be booking more sessions.

My son participated in a trial session and really enjoyed it. Coach Ari worked one on one with him while focusing on the areas of concern. The session’s rate was reasonable and was conveniently located. We definitely recommend Coach Ari to others interested in improving their basketball skills.

Our first training session with Coach Ari was a success. The small group size allowed my son to learn with and from the other players. Coach Ari was able to quickly size my son up and honed in on areas in need of improvement or modification. Explanations offered to improve these areas resonated with my son, as he returned home to practice and implemented the changes. It was a very positive learning experience, and he is looking forward to his next training session.

Awesome coach! He broke everything down for my daughter so she was able to completely understand. He showed her things that she has never been taught that will defintinely improve her game all around. Definitely worth every penny! She will be sticking with Coach Ari!

My sons first session with coach Ari was great. His teachings & techniques were great. They have already began to improve my sons shot, along with his desire to learn more about the game. We are definitely looking forward to our next session.

We were so impressed by Coach Ari! He broke things down and had my son thinking about what he was doing and analyzing when he made a mistake and why so he can make adjustments. My son walked out of the session so excited to practice what he taught him. We are so excited for our next session!

My wife and I were very impressed with Coach Ari's training techniques and how he breaks down each drill, to our child. The drills used at the training sessions are game time training points. I believe his weak points will definitely be improved. I would recommend Coach Ari as a personal trainer.

Coach Ari was amazing with Jordan. His instructions were clear and concise. Looking forward to more.

Coach Ari was awesome. In just one hour my daughter learned fundamental objects to shooting. She left her session with confidence and eager to get to her team practice the next day. This was our first session and I was impressed. I will be scheduling more and Coac Ari is highly recommended

Coach Ari taught me easy broken down techniques to practice at home to better my shot control. His Instructions were very easy and easy for me to catch on too. I liked that we went step by step until I understood everything and mastered the techniques. He made me understand what I did wrong and how so I could fix the mistake. I am looking forward to my next session with coach ari. He did a great job .

Coach Fisher was spot on with the detailed instructions my son needed to improve his game. He gave him tools to improve and techniques he can practice at home that will make him more consistent in his shooting and get his shot off faster. His instructions are well rounded and will help improve basketball skills in every aspect from dribbling, defense, shooting, etc. He is very positive in his critique of my son's abilities. My child asked when he was able to work with him again, and he was happy to have someone with such advanced knowledge to help him.

Coach Ari did an excellent job with my daughter on her first session. His instruction was very easy for her to understand which made it easy for her to perform the drills.

Another great session with Coach Ari. He does an excellent job of building off of one technique to the next. I like the way he gives positive reinforcement/feedback when my daughter uses proper technique and quickly corrects bad techniques. He also make sure she understand what she did wrong and why.

Today was my son's first session with coach Ari. The session was well planned and Coach was very attentive. He gave great pointers and my son learned a lot in an hour. He was even doing wrist exercises on the way home saying that is a part of his homework. I will definitely be booking more sessions.

Coach Ari is a great coach. After one session my son knows exactly what he needs to work on and exactly how to work on it to improve

My son Carter has now taken 6 sessions with coach Ari and he has learned things that no other coach has shown him. I am really looking forward to see him keep improving over the next couple of months.

Coach Ari was very patient and focused on specific details that many coaches overlook. These small details or 'inches' were extremely beneficial and have absolutely helped my son's development. Coach is a student of the game and costantly looks for ways to make a player better.

Coach Ari is an excellent coach, my 15 year old son has had his first training session with him. In just the first session his confidence level has improved.
He had his first game after his session and I see tremendous improvement in his confidence in trusting his shot. I am highly
recommending Coach Ari to anyone that wants to improve their game and knowledge of this sport. Coach Ari also has a positive attitude and that helps in this process.

Coach Ari is an excellent coach with my 15 year old daughter. I see tremondus improvement in her offensive skills as well as her overall confidence on the court. Extremely satified with the Coach Ari and would recommend him to anyone.

Coach Ari is very responsive in scheduling sessions and really cares about working with players to truly make them better players . We recommend Coach Ari to all that are serious about improving their game !

Coach Fisher dedicated countless hours of his time to help me reach my full potential as a basketball player at the high school level from 2001-2004. His tutelage continued through my college career and on through my NBA career and he is someone to this day I can count on to give me valuable criticism and instruction to improve as a person and basketball player.

Coach Fisher showed me about the details of teaching basketball. I was his assistant for 6 seasons who learned about the little details and became a coach who today stresses even the smallest thing. He helped me understand the game in ways I never could have learned anywhere else. I have become the coach I am today because of Coach Fisher's instruction.

Coach Fisher help me transform from a phenomenal athlete to a kid that truly understood the game of basketball. Through his on the court instruction and dedication to studying film, he helped me understand how to be a successful basketball player and not just an athlete playing the sport.